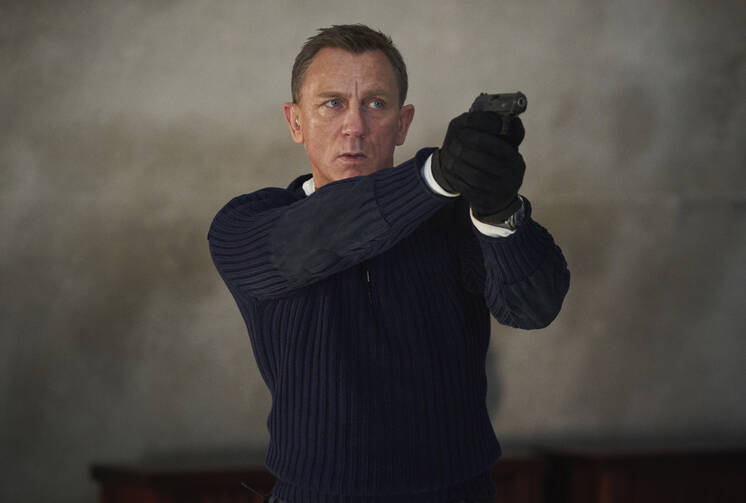 From the moment MGM set a release date for Daniel Craig’s final James Bond film, “No Time To Die,” the same question has been asked again and again: Is there any place for James Bond in a post-#MeToo universe? The film’s creative team and actors have been questioned about it; “Fleabag” creator and star Phoebe Wallace-Bridge was brought in to do a pass on the script (and then was questioned herself); and endless ink has been spilled.

And for those considering whether to see “Die,” which came out Thursday, I can say without reservation that the misogyny of the early Bond films is long gone. The Bond of “Die” is happily settled into retirement with his lady friend Madeleine (Léa Seydoux)—in fact maybe a bit too much so. Craig’s Bond has never spoken (or wept) so much.

But this Bond who respects women and finds himself surrounded by strong female characters—like Lashana Lynch’s badass-by-the-books new 007; or Ana de Armas’s funny new spy, Paloma—is not a new phenomenon. The early history of James Bond is indefensible when it comes to the treatment of women. Connery’s Bond is coldly sociopathic, grabbing women, idly pushing them down and forcing himself upon them. Roger Moore is more dashing, with an Oxbridge flair, but proves equally capable of turning on a dime into a monster ready to break a woman’s arm.

The early history of James Bond is indefensible when it comes to the treatment of women.

But by the time the franchise got to Daniel Craig 15 years ago, that dynamic had completely changed. Mr. Craig’s Bond has always fought to protect and avenge women. He allows himself to have his heart broken by them. And his central ongoing relationships are almost entirely with women—first the maternal relationship he has with boss “M” (played in the first three films by Judi Dench), then the friendship he develops with Moneypenny (Naomie Harris), and then the women with whom he falls in love.

The Craig films do still feature him shacking up with a variety of women. But for the most part these trysts are characterized by mutuality and respect. There is an extraordinary scene in the last film, “Spectre,” in which Bond questions a grieving widow (played by Monica Bellucci) while the two are working themselves into a froth sexually. But the widow understands exactly what he’s doing, and Mr. Craig plays Bond as so focused on his attraction to her that the information gained feels entirely secondary.

If there is any real misogyny left in the series, it lies in the fact that the franchise has created so many strong female characters and then relegated them only to supporting roles in Bond films. Personally I would love a Moneypenny TV series with Naomie Harris. Many of these women characters are ideally positioned to carry spinoffs.

It’s been 70 years since Ian Fleming published his first Bond book, and 60 since the first Bond movie. Why is this still a thing?

The real question for “No Time to Die”—and one that it struggles to answer—isn’t #MeToo. Rather, it’s the question asked by an 88-year-old Jesuit in my community upon hearing that I was writing this article: “James Bond. So what?”

It has been 70 years since Ian Fleming published his first Bond book, and 60 since the first Bond movie. Why is this still a thing?

The five recent Daniel Craig films have provided one long and often interesting character study of an assassin, and Mr. Craig’s work in the films has been exemplary for the subtle vein of vulnerability he has given to Bond. The scene halfway through “Casino Royale” where Bond stares at himself in the mirror and lets his mask of stoicism come down ever so slightly is an extraordinary moment in the history of Bond, and the first in a long series of moves that have humanized his character.

But there are a hundred fascinating character studies of spies and assassins at this point. What always made the Bond films special was their Britishness. In his book The Man Who Saved Britain: A Personal Journey into the Disturbing World of James Bond, Simon Winder describes how important Bond was to the anxious British in an ever more globalized world. “As the 1960s progressed, Bond’s ability to maim and kill foreigners became a great consolation to millions of embittered and confused people whose traditional world picture had changed with alarming speed,” he writes. Amid all the action, suspense and crazy gimmicks, Bond movies have always been stories about Britain grappling with its place in the world.

In focusing so intently on Bond’s own journey—even turning the Man Behind the Curtain villain of the series into a previously unknown foster sibling who is upset that Daddy loved James more—the Craig films have completely lost that dimension. Bond could be working for any country at this point. And as much as I love the choice to give him not just a drink and a fancy car but a soul, the series’s disinterest in the geopolitical is a real loss. The United Kingdom is very much in a space and time where it could use its avatar to help it wrestle with its self-identity and place in the world.

And really, Bond’s personal life can only take you so far. There are moments in “No Time To Die” where Bond feels like he belongs in dad pants dancing to “Hotline Bling.” Ending his story in this way is an interesting choice, but in a post-Brexit world, one would hope for more insight from Britain’s premier character.

Ah well. At least we still have “The Crown.”