Authored by Gq Pan via The Epoch Times (emphasis ours), 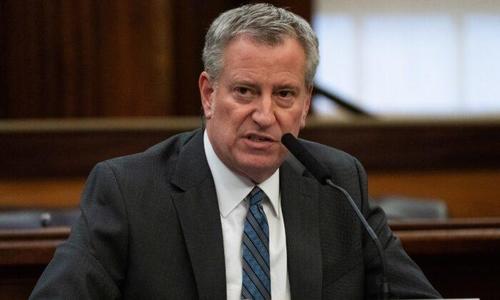 The alleged coverup of New York’s nursing home deaths was first reported by the New York Post. In an audio recording obtained by the Post, Melissa DeRosa, Cuomo’s chief of staff, told a small group of Democratic lawmakers that the governor’s office “basically froze” when they were asked by the U.S. Department of Justice to turn in the data, because they worried that then-President Donald Trump would use the information as a “giant political football” against them.

De Blasio, who has frequently been at odds with Cuomo over the handling of the CCP virus pandemic, said the Post’s report is “really disturbing” and “very troubling.”

“It’s very troubling. We’ve got to know more. We now need a full accounting of what happened,” de Blasio said on WNYC’s “The Brian Lehrer show.”

“We now need a full accounting of what happened,” he said. “Think about seniors who—their lives were in the balance and their families just desperate to get them the help they needed. We need to know exactly what happened here. We need to make sure nothing like this ever happens again.”

The mayor’s comments came as DeRosa sought to clarify her remarks, saying in a statement that the governor’s office was “comprehensive and transparent” in its responses to the Justice Department.

“I was explaining that when we received the DOJ inquiry, we needed to temporarily set aside the Legislature’s request to deal with the federal request first,” she said. “As I said on a call with legislators, we could not fulfill their request as quickly as anyone would have liked. But we are committed to being better partners going forward as we share the same goal of keeping New Yorkers as healthy as possible during the pandemic.”

In August 2020, the Justice Department requested governors of states which had “issued COVID-19 orders that may have resulted in deaths of elderly nursing home residents,” namely Michigan, New Jersey, New York, and Pennsylvania, to turn over data on deaths in those long-term care facilities. Cuomo, joined by Whitmer, pushed back against those inquiries, arguing in a joint statement that they were but a “nakedly partisan deflection” targeting states run by Democrats.