Drug kingpin Joaquin “El Chapo” Guzman’s wife has pleaded guilty for her role in helping her husband run his multi-billion dollar empire in a Washington federal court on Thursday.

32-year-old Emma Coronel Aispuro married El Chapo in 2007 and since then is believed to have “aided and abetted” the Sinaloa cartel in importing over 500,000 kilograms of drugs into the United States – mostly cocaine, but also heroin, methamphetamine, and marijuana. For example the Mexico-based drug operation is believed responsible for up to 80% of all cocaine and heroin sold in Chicago in recent years. She further pled guilty to money laundering and charges related to El Chapo’s famous 2015 tunnel escape from a top security Mexican prison.

Coronel Aispuro, who holds dual US-Mexico citizenship “worked closely with the command-and-control structure” according to prosecutors. She was arrested at Dulles International Airport in February after being allowed to travel freely for years. She was even reported to have shown up to the courtroom daily during her husband’s three-month-long trial.

After previously escaping Mexican prisons two times (which authorities believe his wife helped orchestrate) Guzman was arrested after a shootout and extradited from Mexico to the United States, after which he was sentenced to life in prison by a US court, and is now at the federal supermax prison in Florence, Colorado.

Coronel and Guzman met when she was 18 and he was nearly 50 while she was competing in beauty pageants. She’s since been dubbed ‘Narco Princess’ and is believed to have an estimated worth of five billion dollars. 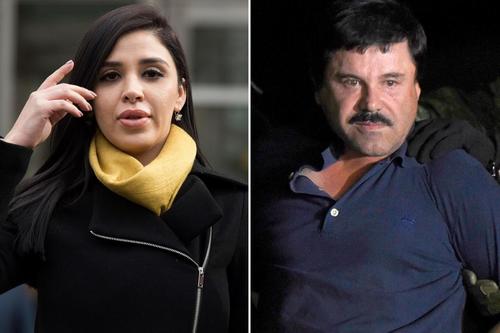 According to CNN, “In Guzman’s trial, a cooperating witness testified that Coronel and others worked together to coordinate details of Guzman’s last escape from prison in Mexico and that Coronel would often relay messages from Guzman in prison to others.”

With her guilty plea she could potentially face life in prison, but it’s expected that she’ll come out of it with a significantly lighter sentence, especially if the plea deal is centered on her providing key information that might help US and Mexico authorities disrupt the Sinoloa cartel’s multi-billion dollar international criminal enterprise.

Emma Coronel Aispuro appeared in federal court in Washington on charges of knowingly and willfully conspiring to distribute drugs. https://t.co/tm6SUGiNmO

However, details of this long in the works plea deal and what she may have given the federal government remain unknown.

Previous post: [ Talk show host retracts apology to Obama for calling him racist ]
Next post: [ Half Of Americans Lost Touch With A Friend During Government-Mandated Lockdowns ]