Warren Buffett, published his annual letter to Berkshire Hathaway shareholders on Saturday. The billionaire has been updating his shareholders in the same format for more than six decades.

The 90-year-old began on a slightly dour – clearly political – tone:

“We retain our constitutional aspiration of becoming ‘a more perfect union.’ Progress on that front has been slow, uneven and often discouraging. We have, however, moved forward and will continue to do so,”

But then the “Oracle of Omaha” rotated wisely back to ‘f**k yeah Murica’ mode:

“Today, many people forge similar miracles throughout the world, creating a spread of prosperity that benefits all of humanity. In its brief 232 years of existence, however, there has been no incubator for unleashing human potential like America,” Buffett wrote.

“Despite some severe interruptions, our country’s economic progress has been breathtaking.”

“Our unwavering conclusion: Never bet against America,” he said. 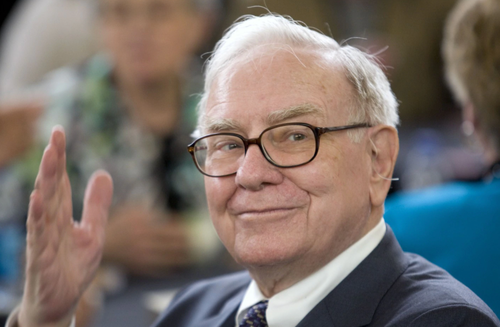 Here are some of the key points outlined in the letter to shareholders:

On the stock market:

“Investing illusions can continue for a surprisingly long time. Wall Street loves the fees that deal-making generates, and the press loves the stories that colorful promoters provide.”

“Eventually, of course, the party ends, and many business ’emperors’ are found to have no clothes.”

On the bond market:

“Bonds are not the place to be these days … Fixed-income investors worldwide – whether pension funds, insurance companies or retirees – face a bleak future.”

“Despite some severe interruptions, our country’s economic progress has been breathtaking.”

On overpriced mistakes: Buffett conceded that the $11 billion writedown Berkshire took last year was due to what was a “mistake” in 2016, when he paid too much for Precision Castparts. Precision is a fine company, Buffett said, but he admitted he made a big error.

“I was wrong, however, in judging the average amount of future earnings and, consequently, wrong in my calculation of the proper price to pay for the business.”

On the energy markets:

“[O]ur country’s electric utilities need a massive makeover in which the ultimate costs will be staggering.”

Notably, after buying back a record $9 billion of its own shares in Q3, Berkshire was unable to find attractively priced investments, and continued the buyback spree repurchasing a similar amount in Q4, bringing its annual buyback for 2020 to a record $24.7 billion. “Berkshire made no sizable acquisitions and operating earnings fell 9% We did, though, increase Berkshire’s per-share intrinsic value by both retaining earnings and repurchasing about 5% of our shares…. The math of repurchases grinds away slowly, but can be powerful over time. The process offers a simple way for investors to own an ever-expanding portion of exceptional businesses.” 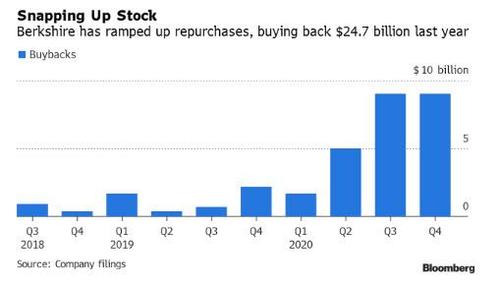 And unable to find better investments, Buffett has continued to repurchase its own stock, :

“Berkshire has repurchased more shares since year-end, and is likely to further reduce its share count in the future. That action increased your ownership in all of Berkshire’s businesses by 5.2% without requiring you to so much as touch your wallet.”

Perhaps to be expected, the company’s cash – which in Q2 hit a record $146.6 billion, declined by $7.4BN, to a still remarkable $138.9 billion, as Buffett continues to struggle to find investments and as Berkshire throws off cash faster than he can find higher-returning assets to snap up. 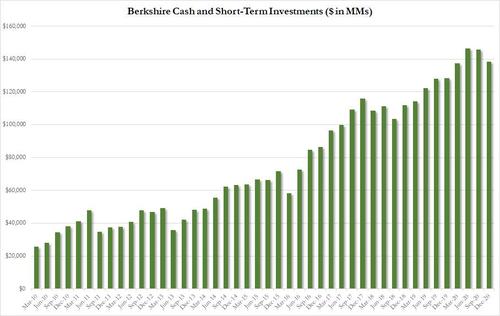 Finally, in terms of actual results, the company reported Q4 operating income of $5.02 billion, up 14% from $4.42 billion Y/Y, with insurance underwriting resulting in an operating loss of $299 million, down -65% Y/Y. 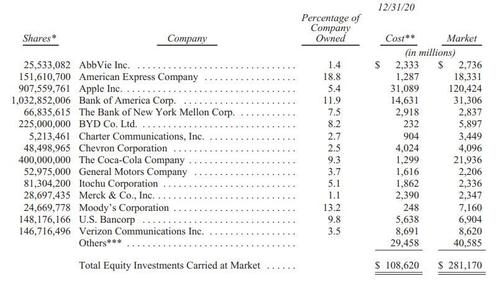 … feed into the company’s net income because of an accounting technicality. That drove net income up 23% to $35.8 billion in the fourth quarter from a year earlier. After another disappointing year, Berkshire’s Class A shares gained roughly 2.4% last year, falling short of the 16% increase in the S&P 500, and less than 1/100th the 306% return of bitcoin in 2020.

As Bloomberg notes, Buffett only briefly touched on one of the largest questions looming over Berkshire – how long he might stay at the helm. He once again referenced a favorite CEO, Mrs. Blumkin, who founded Nebraska Furniture Mart. She worked until she was 103 – “a ridiculously premature retirement age as judged by Charlie and me,” Buffett wrote, referring to Charlie Munger.

And speaking of Munger, Buffett’s letter comes days after the Berkshire Vice Chairman sounded off about the “wild speculation” in markets.

Munger will be on stage with Buffett at the annual meeting to answer questions in May – we’re assuming he will continue his spat with Robinhood. 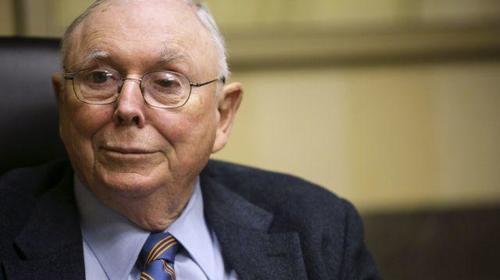 Read the entire letter below: