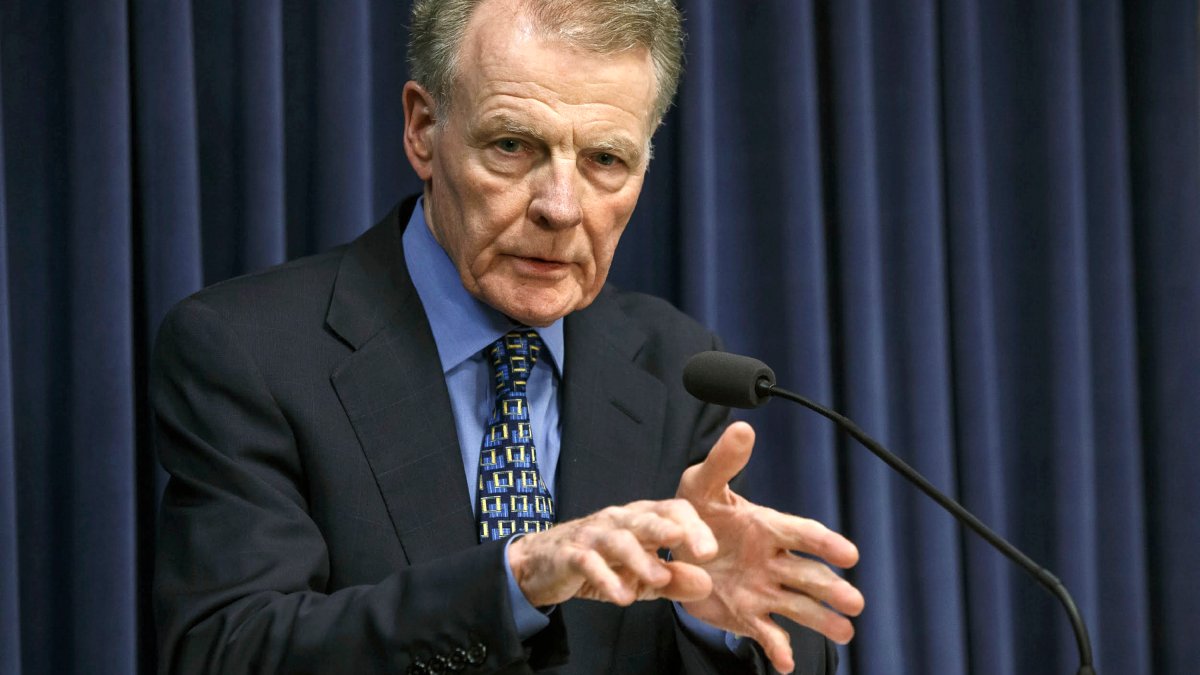 Michael Madigan, the former speaker of the Illinois House and for decades one of the nation’s most powerful legislators, was charged with a nearly $3 million racketeering and bribery Wednesday, becoming the most prominent politician swept up in a federal investigation of entrenched government corruption in the state.

Madigan, 79, is charged with 22 counts, according to the indictment obtained by NBC 5. It “accuses Madigan of leading for nearly a decade a criminal enterprise whose purpose was to enhance Madigan’s political power and financial well-being while also generating income for his political allies and associates,” according to a release from the U.S. Attorney’s office for the Northern District of Illinois

Former NBC 5 political editor Carol Marin called it the “most sweeping federal investigation we have ever seen come out of the Dirksen.”

“Corruption by an elected official and his associates undermines the public’s confidence in our government,” U.S. Attorney for the Northern District of Illinois John Lausch said in a statement. “The indictment alleges a long-term, multifaceted scheme to use public positions for unlawful private gain. Rooting out and prosecuting the kind of corruption alleged in the indictment will always be a top priority for this office.”

I was never involved in any criminal activity. The government is attempting to criminalize a routine constituent service: job recommendations. That is not illegal, and these other charges are equally unfounded. Throughout my 50 years as a public servant, I worked to address the needs of my constituents, always keeping in mind the high standards required and the trust the public placed in me. I adamantly deny these accusations and look back proudly on my time as an elected official, serving the people of Illinois.

Madigan was implicated in the bribery scheme in July. ComEd admitted it secured jobs, often requiring little or no work, and contracts for his associates from 2011 to 2019 for favorable treatment in regulations. ComEd agreed in August to pay $200 million.

Madigan had previously not been charged in the probe, and described himself as “the target of vicious attacks by people who sought to diminish my many achievements.”

Previously, two former ComEd executives and two consultants, one a longtime Madigan associate and confidant, were indicted on multiple federal charges related to the alleged scheme to influence Madigan – at the time identified only as “Public Official A” – in exchange for legislation favorable to the utility giant, prosecutors say.

The charges against Madigan come nearly one year after his resignation from the state legislature after nearly three decades in power.

Madigan was the longest-serving state House speaker in modern U.S. history and was nicknamed the “Velvet Hammer” for his insistence on strict party discipline. A procession of top state politicians, including three governors, has been charged during his tenure, but politicians long believed the savvy Madigan would never be among them.

As speaker, the ever-confident Madigan tended to shrug off the political scandal of the day. A spokeswoman for Madigan last year denied the ComEd-related allegations and said Madigan would cooperate with the investigation “which he believes will clearly demonstrate that he has done nothing criminal or improper.”

That wasn’t good enough for members of his House Democratic caucus, many of whom weren’t born when Madigan was first inaugurated in 1971. Despite his determination to win a 19th term as speaker in January, support peeled away and he was unable to garner the 60 votes needed to retain the gavel. Relegated to the rank and file of the 118-member House, he resigned his seat effective Feb. 28, 2021. He resigned as chairman of the Democratic Party of Illinois on Feb. 22.

Madigan’s former chief of staff, Timothy Mapes, was indicted in May for lying under oath to a federal grand jury investigating ComEd. The indictment said Mapes was granted immunity to testify and that his words or evidence can’t be used against him in a criminal case unless he committed perjury.

Four people, including an associate of Madigan’s, were indicted in November on charges accusing them of orchestrating a bribery scheme with ComEd.

Among them was Michael McClain, who served with Madigan in the House in the 1970s and early 1980s before becoming a lobbyist. One of his clients was ComEd.

All pleaded not guilty.

In addition to jobs and contracts, the defendants were accused of conspiring to have ComEd hire a law firm favored by Madigan and to accept into ComEd’s internship program students who resided in Madigan’s 13th Ward, even though some didn’t meet its requirements, according to the indictment.

Madigan held the gavel in the House for all but two years from 1983 to 2021, driving the political agenda regardless of which party controlled the governor’s office or the other legislative body. He served through the terms of seven governors. One, Republican Gov. Bruce Rauner, complained that Madigan, not he, was in charge of the state.

His power base was a middle-class district near Midway International Airport on Chicago’s Southwest Side, where his loyalists, many on government payrolls, reliably turned out to canvass neighborhoods and register voters. With an eight-figure campaign fund, he could pick and choose Democratic candidates across Illinois to run for office and finance their races. The Chicago Tribune in 2014 found more than 400 current and retired state and local government workers with campaign ties to Madigan. Madigan’s daughter, Lisa, served as Illinois attorney general from 2003 to 2019.

Pay-to-play allegations were raised against Madigan, but he denied them and none resulted in criminal charges. In 2013, the head of Chicago’s Metra Rail transit system claimed after being forced out that Madigan pressured him to give jobs and raises to political favorites.

The former Senate Transportation Committee chairman pleaded guilty earlier in 2020 to taking thousands of dollars in campaign contributions from a red-light camera company in exchange for blocking legislation that would hurt it. Sandoval had agreed to cooperate with federal prosecutors in their ongoing corruption probe as part of his plea agreement, but he died in December from COVID-19 complications.

Court papers mistakenly unsealed in another case revealed that the FBI had placed a recording device on a businessman to secretly record a conversation with Madigan in 2014.

Prosecutors have brought charges against another veteran Chicago Democrat, City Council member Ed Burke, accusing him of taking official actions for private gain. He has pleaded not guilty.

In October 2019, former Democratic state Rep. Luis Arroyo, a Madigan lieutenant, was charged with bribing a legislative colleague with an offer of $2,500 a month in exchange for the state senator’s support of sweepstakes-related legislation. He pleaded guilty and resigned.

Madigan has a reputation for spurning the media and rarely speaking in public. But when reporters asked in 2019 if he was an investigative target, Madigan was emphatic.

As scrutiny of Madigan intensified, he also wrote a letter to House colleagues, denying wrongdoing or personal knowledge of any bribery scheme. He has said he never expected someone to be hired for a job in exchange for an action he took. “Helping people find jobs,” he said, “is not a crime.”

Check back for more on this developing story.