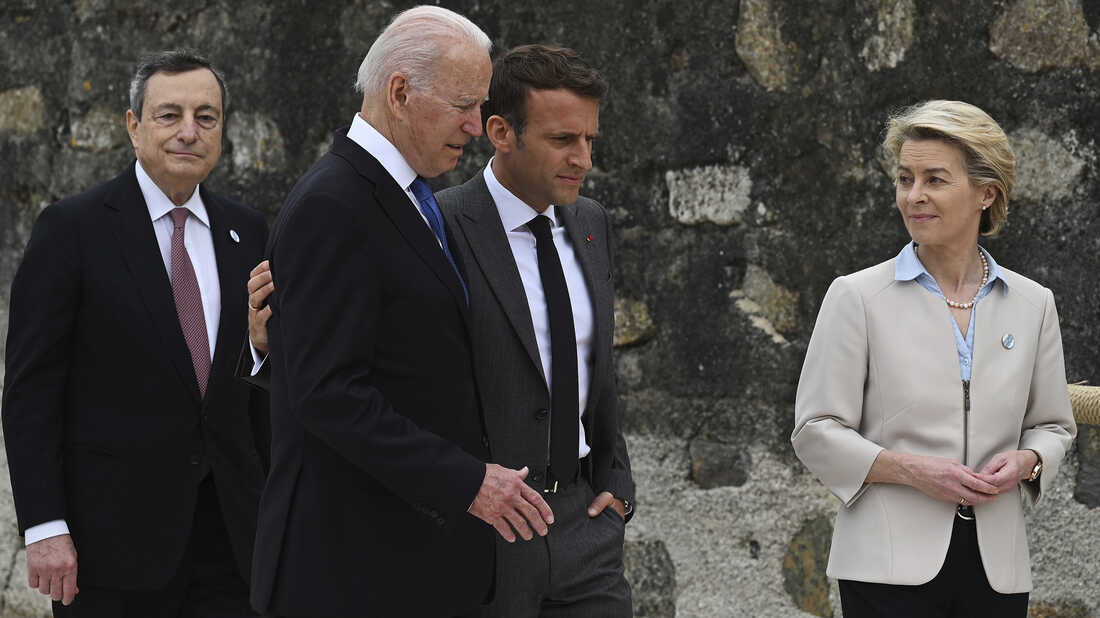 Back in June at the G-7 summit in England, French President Emmanuel Macron (center, right) and President Biden appeared to be getting along fine. They spoke Wednesday after a rift that began with a new security alliance. Leon Neal/AP hide caption 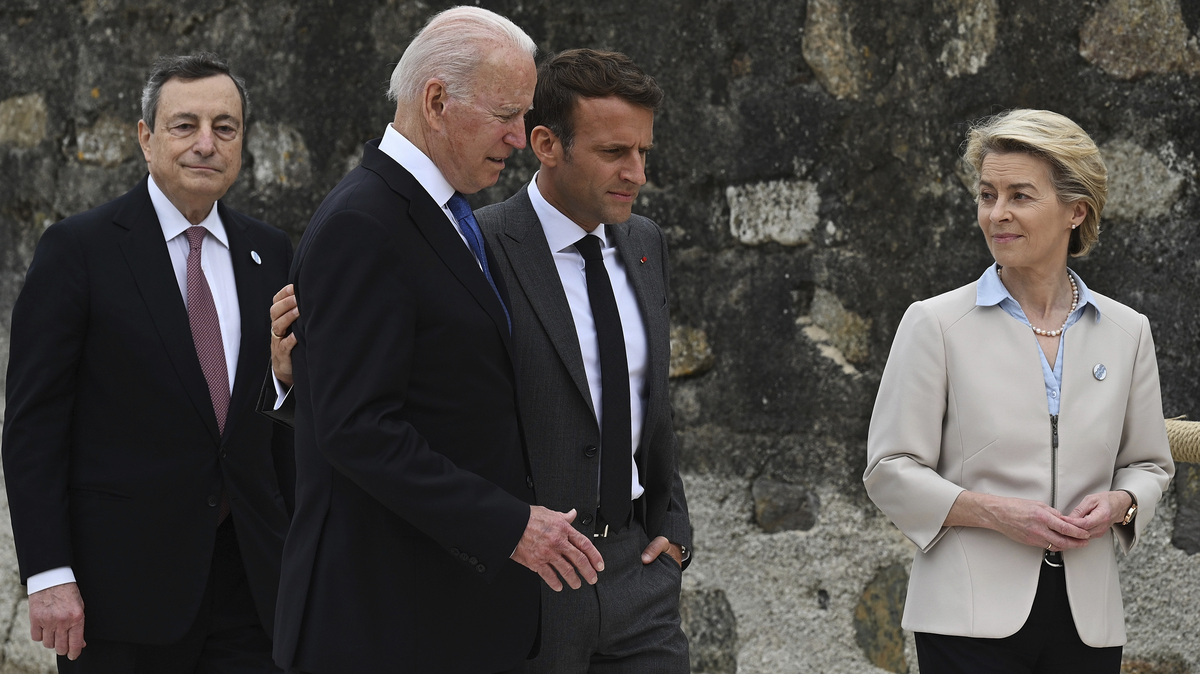 Back in June at the G-7 summit in England, French President Emmanuel Macron (center, right) and President Biden appeared to be getting along fine. They spoke Wednesday after a rift that began with a new security alliance.

President Biden and French President Emmanuel Macron spoke by phone on Wednesday about the rift between the longtime allies over a new defense partnership in the Indo-Pacific region.

The two leaders agreed to meet in person in Europe at the end of October, and Macron agreed to send the French ambassador back to Washington, D.C., for more talks.

On the recent row, “The two leaders agreed that the situation would have benefitted from open consultations among allies on matters of strategic interest to France and our European partners. President Biden conveyed his ongoing commitment in that regard,” they said in an unusually descriptive joint statement about the call, which the statement said Biden had requested.

“The two leaders have decided to open a process of in-depth consultations, aimed at creating the conditions for ensuring confidence and proposing concrete measures toward common objectives,” they said.

It was their first conversation since Biden last week announced that the United States would work with Australia and the United Kingdom in the new defense partnership, in which the U.S. will share its nuclear-powered submarine technology with Australia. The new security coalition is called AUKUS — an acronym of the three countries’ abbreviations.

The deal resulted in Australia canceling a contract with France for conventional submarines.

Furious about the arrangement, France took the highly unusual step of recalling its ambassadors from Washington and Canberra.

The view from France

In France, the torpedoing of its submarine contract with Australia and the forming of a new alliance was seen as much bigger than just the loss of a lucrative defense deal.

The country took it to heart as a betrayal by some of its closest allies, in particular the United States. Philippe Etienne, the French ambassador to the U.S., told NPR that Biden’s decision was “a breach of trust.” 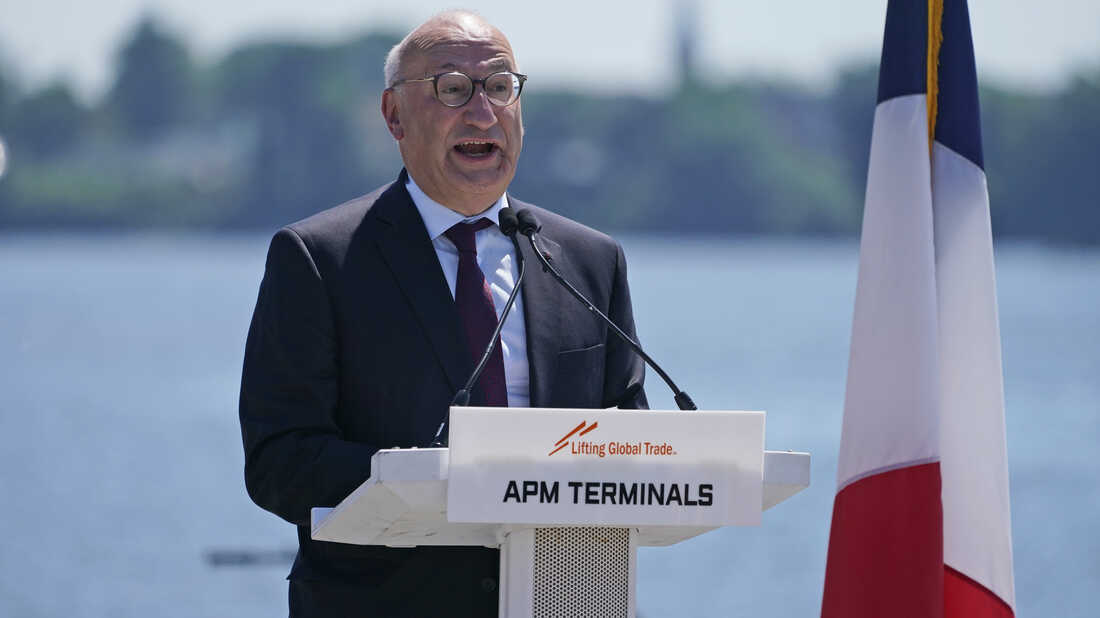 The French ambassador to the United States, Philippe Etienne, speaks at an event at the Port of New York and New Jersey in Elizabeth, N.J., in June. After a brief recall home, it appears he will heading back stateside. Seth Wenig/AP hide caption 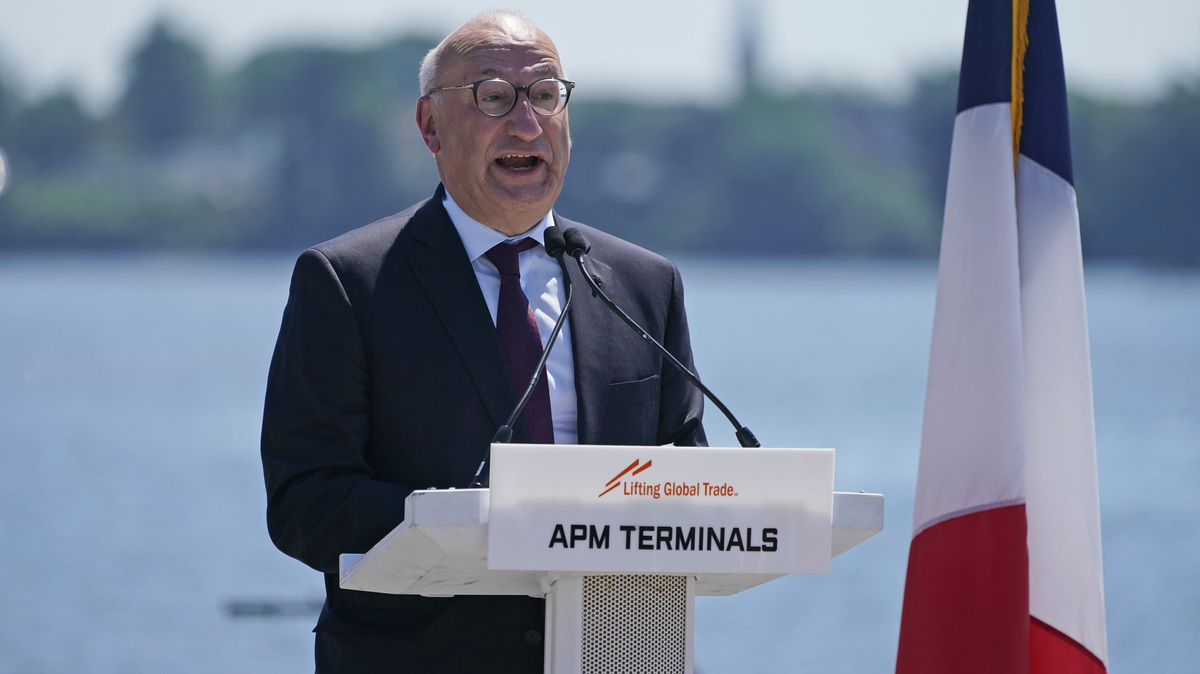 The French ambassador to the United States, Philippe Etienne, speaks at an event at the Port of New York and New Jersey in Elizabeth, N.J., in June. After a brief recall home, it appears he will heading back stateside.

Barely a month ago, on Aug. 30, the Australian defense and foreign ministers were in Paris with their French counterparts hailing the deal.

France’s submarine contract with Australia, which was signed in 2016, was part of its pillar for strategic autonomy in the South Pacific, where it has sovereign interests. There are more than 1.6 million French people living in French overseas territories, and 7,000 soldiers are permanently deployed in the region.

Dominique Moïsi, a political analyst with the Montaigne Institute, says at the end of the day what transpired was all about cold, hard realpolitik.

“The Australians switched from France to America not because the submarines America was offering them were nuclear,” he said, “but because they were American.”

Moïsi says when it comes to containing Chinese ambition in the area, Australia simply believes the U.S. is a better bet than France.

The submarine affair, coming right on the heels of the chaotic and violent U.S. departure from Afghanistan — which also left America’s European allies in the lurch — has given new impetus to talk of European strategic autonomy and defense.

The European Union has sided with France, and Germany’s European affairs minister, Michael Roth, called what happened “a wakeup call for the EU.”

Meanwhile, British Prime Minister Boris Johnson — the other key player in this global drama — advised France to “prenez un grip,” or get a grip, on the matter, as he hailed the new agreement as “a great step forward for global security.”

Boris Johnson, speaking outside the Capitol, says it’s time for the French to “prenez un grip” and “donnez-moi un break” after the spat over a U.K. submarine deal with the U.S. and Australia pic.twitter.com/FpVywohTjK