From 1986: Andre Dubus on being a Catholic writer in a country that lost religion 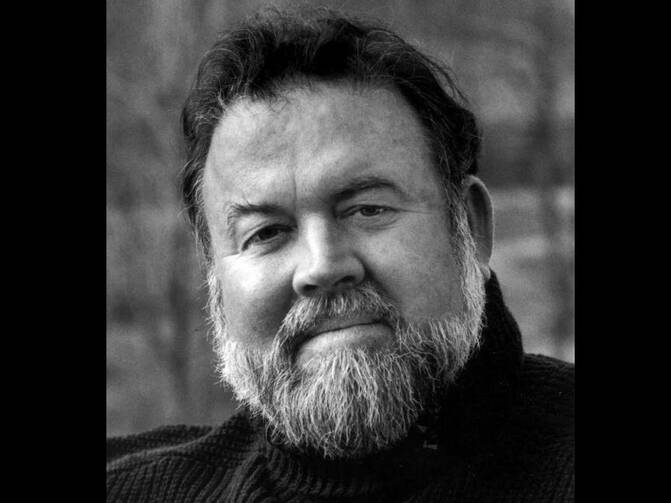 Editor’s note: This interview originally appeared in the Nov. 15, 1986 issue of America.

What authors or works of literature have influenced you?

Chekhov the most. I cut my teeth on Hemingway, not stylistically or thematically, but because I did a research paper on him as an undergraduate. I learned a lot about the craft, not so much from reading his work, but about his ap­proaches to writing. He gave me advice: Do physical exer­cise after writing and forget what you have written; don’t think about it; let your subconscious think about it; always stop when you’re doing well; save the rest for the next day and stop in midsentence (I still do that). I’ve violated that rule twice in my career; I went ahead and got too excited and I finished the scene of a story. And you know, you live another 12 lives before you get back to your desk the next day—with interruptions by your family, your friends, your enemies and your bills. By the time I get back to my desk the next day, I don’t even remember the story. Those two mornings after I violated that rule, I just walked up and down in the den all morning trying to remember what was supposed to happen next and attempting to get it in the story. It’s wonderful advice. So I learned about writing from Hemingway.

Chekhov is the one that taught me to look more deeply, with more compassion and compression. Marvelous writer. I was writing my second novel when I read his story “Peasants.” I was writing a novel that wasn’t any good­—just a bunch of scenes that anybody can put together. Something like some bad John O’Hara. I read “Peasants” one afternoon after writing and I thought that was strange; Chekhov said he couldn’t write a novel because he couldn’t write narrative, but in this story he’s covered in 30 pages an entire year and dealt with both one family and one peas­ant village—a microcosm of most of Russian society after the freedom of the serfs. Now how did he do that? Then I reread it and it’s all scenes, almost. And I saw how he wrote thematic scenes and compressed them into 30 pages and dealt with peasants, religion, booze, the innocence of children and their future as peasants. I threw away those two or three chapters and said, “It’s time to learn how to write!” I began trying to learn how to write. That was in 1968 and I have been trying that ever since. And every time I read something great by Chekhov, I think, “Well, I’ve got a long way to go,” which is the reason I keep doing it, I guess.

What about some of the Southern authors?

Faulkner—big influence. When I was younger, my thoughts were in Faulknerian rhythms. I never read Faulkner while I wrote. I still don’t read his works while I’m writing. Only a couple of people I know have noticed some Faulknerian rhythms in my fiction. Richard Yates is one of them. Faulkner wrote action so well. He could create movement that is also suspended at the same time—and it’s not slow motion. It’s as though you can see each moment of the motion, but the motion is still moving, as in “Barn Burning” when Ab Snopes throws the rug on Major de Spain’s porch, and Sarty Snopes is on the mule, kicking the mule, and Ab reaches out and pulls his hand back. Faulkner’s rhythms show all the speed of throwing the rug and the rug thumping and the lights going on in the house and people coming down and the boy’s fearful heart and the mule starting to move out. Faulkner has not really stopped the action because there is still motion going on. Perhaps the best example is in “Pantaloon in Black” when Rider kills the cheating Birdsong, who goes for his revolver as Rider takes out the razor to kill him; you get each detail of the movement—the razor blade in his fist then its unfolding as it slashes Birdsong’s throat before the blood even spurts. It’s beautiful! I never tried to imitate that. I know that’s where my long sentences come from and the focus on detail when I’m writing some action. I have also been influenced by Gina Berriault and Nadine Gordimer.

What about Flannery O’Connor?

No, she frightens me. I don’t read her much. I wish I had never read that quote of hers where she said that she writes about sacraments that nobody believes in. Every time I read her stories I look for the sacraments and get lost in the story. A friend of mine gave me good advice, but I can’t take it; he said, “Forget what Flannery O’Connor said, just read her stories.” But I can’t. I’m always looking around for baptisms and Communions. I wish she had never said what she did. I don’t know. I have a story, “Miranda Over The Valley,” which is full of Catholic symbols and allusions, and­ yet few have mentioned them in critiques of this story. On the other hand, I hoped nobody would because they were for me.

What about your own Catholicism? How important is that to you?

I think it pervades my writing, because for a long time I wrote about people who had no relationships with the deity since I was curious about living like that. But I have always been a Catholic. I think my Catholicism has increased my sense of fascination and my compassion. When I write about Catholics, I get very excited because there are a lot of ethical problems Catholics can get into.

Well, if a person is a real Catholic, almost anything is an ethical problem, and that person can either resort to the rules the person has been taught, such as the Ten Commandments, the Six Commandments of the church, or the person can move on to the New Testament and think about the ass being in the ditch. A Jesuit once said to me in high school: “You will never meet anybody who has committed a mortal sin. You have as much chance of doing that as you have of meeting someone who has committed a capital crime, because it is almost impossible to commit a mortal sin.” Right? There has to be so much premeditation; you have to be as cold about it as a businessman or a hit man, and most people don’t do that. That’s why I think seven years is not a bad sentence for most murderers, because most murderers are one-time murderers who kill a friend or someone in the family and would never do it again. I think most of them say, “Oh, my God,” when they realize what they have done. Aren’t 90 percent of our murders committed among family and friends?

Would you identify yourself as a Catholic writer?

What does that mean in terms of your writing?

Well, I see the whole world as a Catholic, so I can’t help but see my characters through the eyes of a Catholic. The story I just finished, “Blessings” [printed in Delta], has, I think, a lot of religion in it, including secular sacraments. But, like many American families, these characters are not churchgoing people. The family in “Blessings” went through a good deal; there are a lot of blessings in the story.

John Updike said about Joe Ritchie in Voices From the Moon that the church still functions as a standard of measure. Do you agree with Updike’s assessment?

Yes, I do. I still think the main problem with the United States is that we lost God and we lost religion and we didn’t replace God or religion with anything of value. It doesn’t bother me if people (including my own children) don’t have religion, as long as they replace it with a philosophy. We are raising my daughter Cadence as a Catholic. I like very much what the young priest said when he had all the parents of the children to be baptized over to the rectory the week before the baptism: “You are raising your child Catholic in the same way you are going to feed your child certain foods. It is good for the child, and at a certain age the child may say, ‘I don’t want this,’ but you have to start it with a certain nutrition.” Now if Cadence finds another philosophy later on, then I don’t consider her religious training a failure. I don’t consider her lost—a spiritual loss. This country hasn’t found any philosophy except money—and selfishness.

I find the United States a very nonspiritual country, and I think that is largely the problem. In fact, we might need an enforced agape for survival, and in this way maybe people will be good again. I’ve seen the whole of my fictive world through the eyes of someone who be­lieves the main problem in the United States is that we have lost all spiritual values and not replaced them with anything that is compara­ble. We just pretend all this. We never have been a Christian country. As a matter of fact, there never has been a Christian country. Has there ever been a country that didn’t kill its enemies, oppress the poor and bring the strong and the rich to power? Well, it sad­dens me and angers me. Maybe that’s why I’m fascinated by the mystics, those who transcend all that drowns me. The mystics remain in harmony with the earth and their fellow human beings and, yet, are above it all as they enjoy union with God. It’s like an opera! It’s beautiful!