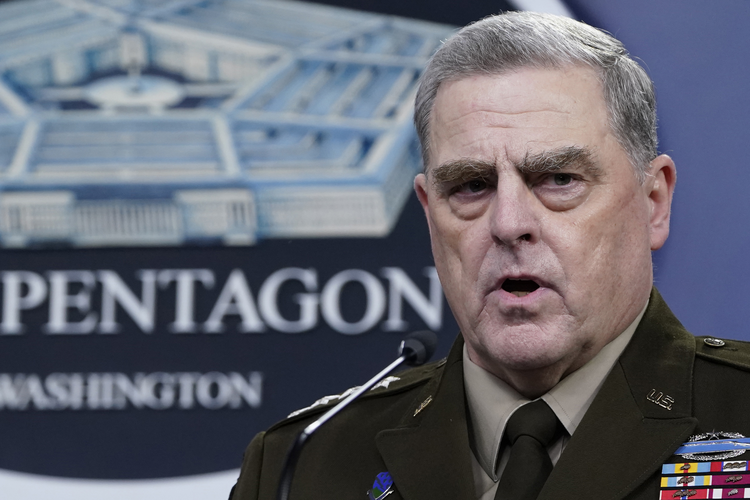 It is a tough feat to add any more jaw-dropping history to the wild narrative of Donald J. Trump’s residency in Washington, but Bob Woodward and his co-author Robert Costa seem to have managed it. Previews of some of the revelations included in Peril, Mr. Woodward’s latest tome on the Trump years, launched a thousand outraged tweets and broadsides on social media on Sept. 14. Many urged the resignation, removal or even the prosecution of General Mark Milley.

America’s top military chief was scorched by right-wing media outlets and Republican politicians after Peril excerpts depicted a series of pre-emptive moves he undertook in October and January, not to protect the nation from a new terrorist threat or hold off an old-school global adversary but to save it from its outgoing president. According to Peril, Gen. Milley, chairman of the Joint Chiefs of Staff, appointed by Mr. Trump in 2019, was deeply alarmed by the president’s increasingly erratic behavior as his term concluded and worried that Mr. Trump might create and politically weaponize an international crisis of some kind.

America’s top military chief was scorched by right-wing media after book excerpts depicted pre-emptive moves, not to protect the nation from a new terrorist threat but to save it from its outgoing president.

On Jan. 8, the general convened a meeting of senior officers to review the procedures for launching nuclear weapons. The Washington Post reports that he told them that while the president alone could give the order for a nuclear strike, he added, “crucially, that he, Milley, also had to be involved. Looking each in the eye, Milley asked the officers to affirm that they had understood, the authors write, in what he considered an ‘oath.’”

At that time, Mr. Trump was almost daily provoking supporters by repeating fraudulent claims that the presidency had been stolen from him in the November election of Joseph R. Biden Jr.

Mr. Woodward and Mr. Costa report that the general also sought out counterparts in nations that could have potentially been Mr. Trump’s targets to assure them that the U.S. military would not be turned into the instrument of a coup against the then-incoming Biden administration. On Sept. 15, the general defended phone calls he made to his Chinese counterpart, explaining the conversations were intended to convey “reassurance” to the Chinese military and were in line with his responsibilities as chairman of the Joint Chiefs of Staff.

Robert Latiff is a retired U.S. Air Force major general and an adjunct professor at the University of Notre Dame, researching emerging weapon and national security technologies, just war theory and law of armed conflict. He described the uproar over the general’s alleged acts during the waning days of the Trump administration as “very much a media-frenzy situation.”

In an email follow-up to a conversation with America, he wrote: “If Milley did call China or Russia or anyone else, he most definitely would not have revealed classified information—that is a nuts kind of allegation,” adding, “Milley didn’t get to be C.J.C.S. by being stupid.”

“Whenever a country is undergoing an election, contested or not, other countries—allied and adversary—are rightfully especially interested,” he said. Though it may come as a surprise to some in the civilian world, he explained, it is not unusual for military leaders even of presumed adversary states to remain in contact with each other in efforts to avoid misunderstandings that could have devastating outcomes.

The former Air Force major general added that he could discern nothing out of line with Gen. Milley asking his subordinate officers to inform him before they took any actions at the direction of the president. “He didn’t tell them to refuse the order. He just said, ‘Make sure that I am involved in the decision process.’ I think that was a perfectly legitimate thing for him to do.”

“If Milley did call China or Russia or anyone else, he most definitely would not have revealed classified information—that is a nuts kind of allegation.”

Gen. Milley was hardly the only Washington insider concerned about former President Trump’s conspiracy-mongering during the days leading up to the Jan. 6 insurrection on Capitol Hill. Peril reports that C.I.A. Director Gina Haspel told Gen. Milley, “We are on the way to a right-wing coup.” And all 10 living former U.S. secretaries of defense, in a signed op-ed in The Washington Post, warned then-President Trump not to involve the U.S. military in his dubious campaign to relitigate the 2020 election result.

Gen. Milley is a former altar boy who apparently takes his Catholic faith seriously. The Washington Post reported that, inspired by the church’s traditions—“confess your sins, do your penance, and…move on”—he decided to issue an unprecedented apology after he allowed himself, and by extension the U.S. military, to be a part of Mr. Trump’s infamous photo-op outside St. John’s Episcopal Church in Lafayette Square in June 2020.

Could his faith have played a role in his decision to maneuver Mr. Trump away from any wayward military adventures as his term in office reached its raucous conclusion?

Reviewing the stories unearthed in Peril, Mr. Latiff said he did not perceive the need for Gen. Milley to tap too deeply into his Catholic identity. “I think his actions were more about his professionalism than his Catholic…background,” he said, though “it may have informed his decision-making.”

The U.S. military code of conduct itself obligates service members to decline to follow “unlawful” orders from their superiors, though that obligation is most often tested in the negative—that is, when service members are on trial not for refusing unlawful orders but for following them. Though Catholic sensibilities are not necessarily most at play in those rare instances, Mr. Latiff noted that modern military codes of conduct are rooted in the teaching of Sts. Augustine and Thomas Aquinas and the just war tradition they established.

Could Gen. Milley’s Catholic faith have played a role in his decision to maneuver Mr. Trump away from any wayward military adventures as his term in office reached its raucous conclusion?

From a perspective of that tradition and the church’s position on the moral indefensibility of the use of nuclear weapons, any effort by Gen. Milley to thwart a possible nuclear strike was justified, said Gerard Powers, the director of Catholic peacebuilding studies at the Kroc Institute for International Peace Studies at the University of Notre Dame.

“The most grave responsibility a president has is to prevent a nuclear war, and if, as is alleged, Trump was so irrational, emotionally unstable and so obsessed with his downed political fortunes that he might launch a nuclear strike, then it was an emergency situation,” Mr. Powers said, “and in an emergency situation anyone in the position to help prevent that nuclear strike had a moral obligation to do so.”

While some military ethicists have carved out a moral space for the use of nuclear weapons—the church does not—Mr. Powers believes that any ethicist would object to a use of force under a “wag the dog” scenario. “Even if Trump were perfectly lucid and rational,” he said, a decision to launch a nuclear strike with the intention of using that crisis to remain in office would constitute an “illegal and gravely immoral order, and anyone in the chain of command had an obligation to disobey that order.”

Kevin Ahern, an associate professor of religious studies at Manhattan College in the Bronx, unpacking the issue of Catholic conscience and the role of Catholics in the military, said that it was only relatively recently, “thanks in large part to the work of Dorothy Day,” that Catholics began to recognize conscientious objection to military service by fellow Catholics as a legitimate moral stance. “The Catholic Church’s teaching on this question has evolved,” he said. “Over the past 75 years there has been a growing awareness of the conscience and responsibility of the individual soldier or commander to the moral evaluation of the decisions and the things that they are part of.”

Gen. Milley’s efforts to deflect the president’s possible bellicose moves could reflect the expression of “selective conscientious objection” reduced to specific objectionable orders, he said. Or they could just reflect his professional understanding of contemporary international law on war crimes.

“If Trump was so unstable and so obsessed with his political fortunes that he might launch a nuclear strike, then anyone in the position to prevent a nuclear strike had a moral obligation to do so.”

“The Nuremberg Trials after the Second World War very clearly established that in situations of war crimes, military officers cannot say that they were just following orders,” Mr. Ahern said.

But the moral concerns raised by Gen. Milley’s campaign to contain Mr. Trump should not be limited to disputes over military chain of command obligations, Mr. Ahern said. To him the controversy surfaces a larger moral predicament that all contemporary U.S. Catholics should be evaluating.

The church has taught since “Pacem in Terris” in 1963 that the use of nuclear weapons is never morally permissible, but it maintained a glum acceptance of nuclear deterrence as long as it represented a strategic stage toward nuclear disarmament. In recent years, however, the church, under the leadership of Pope Francis, has rejected deterrence and said that even the possession of nuclear weapons is morally unacceptable.

The Vatican, in fact, has been at the forefront of a successful global campaign to abolish nuclear weapons altogether. The Holy See was the first U.N. member state to sign the United Nations Treaty on the Prohibition of Nuclear Weapons in September 2017. The treaty, which outlaws the development, testing, stockpiling and possession of nuclear weapons, was adopted by the U.N. General Assembly in July 2017 and went into effect in January after it was ratified by a 50th U.N. member state, Honduras, in October 2020.

Mr. Ahern believes the spectacle of Mr. Trump’s dangerous last weeks in office should provide ample evidence of the church’s wisdom in demanding aggressive disarmament and eventually a world free of nuclear weapons altogether. The United States is alone among states with nuclear weapons to empower just one individual, the president, with the authority to order a nuclear attack. Under current constraints, there is just about no legal recourse for a military official or other member of a civilian government to contest or countermand that order.

“The fact that the president has such unchecked power to order a nuclear strike—at the very least Catholics should be asking the question: Should the process…involve more checks and balances than are already [in place], given the gravity of [the use of] nuclear weapons?” Mr. Ahern said.

“If we are not going to…engage in a process of complete disarmament of nuclear weapons, does the system need more checks and balances than it already has? I think that it does.”