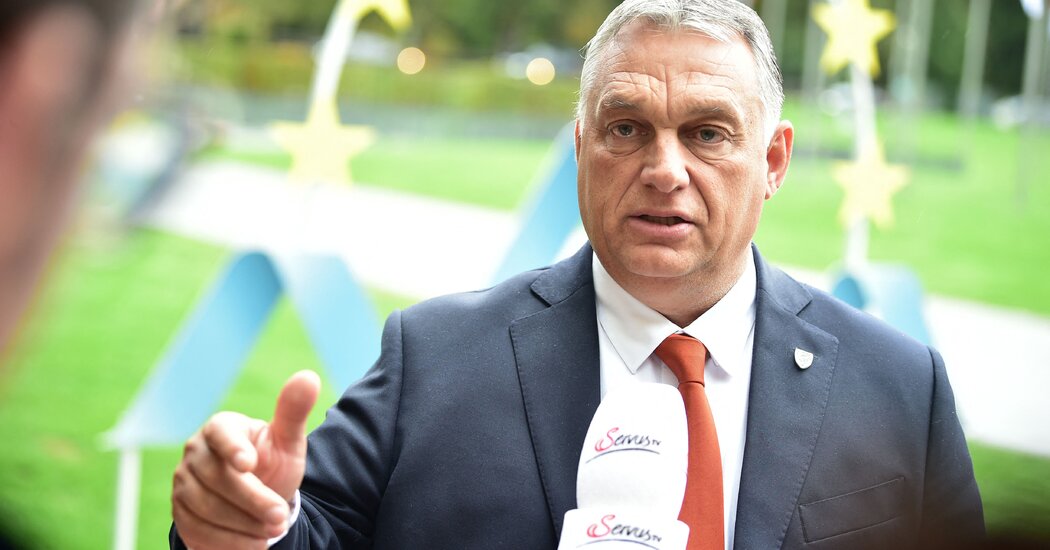 More than 130 nations agreed on Friday to a sweeping overhaul of international tax rules, with officials backing a 15 percent global minimum tax and other changes aimed at cracking down on tax havens that have drained countries of much-needed revenue.

The Organization for Economic Cooperation and Development, which has been leading the negotiations, said 136 countries and jurisdictions had signed on to the deal.

“Today’s agreement will make our international tax arrangements fairer and work better,” Mathias Cormann, the organization’s secretary general, said in a statement. “We must now work swiftly and diligently to ensure the effective implementation of this major reform.”

The agreement is the culmination of years of fraught negotiations that were revived this year after President Biden took office and renewed the United States’ commitment to multilateralism. Finance ministers have been racing to finalize the agreement, which they hope will reverse a decades-long race to the bottom of corporate tax rates that have encouraged companies to shift profits to low-tax jurisdictions, depriving nations of money they need to build new infrastructure and combat global health crises.

On Friday, Hungary, which had sought sweeter terms, agreed to back the new tax, joining two other important holdouts, Ireland and Estonia, which ratified the deal on Thursday.

The agreement to enact a 15 percent minimum corporate tax rate had been proposed by the United States, which has long looked for ways to minimize incentives for companies to shift profits abroad to lower their tax bills. As the Biden administration prepares to try and raise corporate tax rates in the United States, getting a global minimum tax in place has become critical to prevent companies from simply shifting their headquarters overseas.

The deal goes beyond setting a global minimum tax — it also creates new rules for the digital era. Under the agreement, technology giants like Amazon, Facebook and other big global businesses will be required to pay taxes in countries where their goods or services are sold, even if they have no physical presence there.

The accord would represent a sea change in the way the world’s largest corporations have been taxed for decades, and is likely to see them pay more taxes while spreading taxable revenue more evenly to countries where those businesses earn sales. Until now, profits have largely been taxed where businesses have had a physical presence.

The agreement represents a significant diplomatic win for Treasury Secretary Janet L. Yellen, who has made the international tax negotiations a top priority during her first year in the job.

In remarks on Friday ahead of the announcement, Ms. Yellen said “the international tax agreement will stop the four-decade long race to the bottom on corporate taxation — where tax authorities offer lower tax rates to attract business, leading others to respond with lower rates.”

The agreement is expected to be finalized next week in Washington by finance ministers of the Group of 20 largest economies, and national leaders are likely to sign off when they meet for a summit in Rome at the end of October. Countries have set a goal of fully activating the agreement by 2023, because it will take time for countries to change their tax laws and for international tax treaties to be updated.

But getting that legislative approval is not guaranteed. In the United States, Congress still needs to ratify any deal. To comply with the new global minimum tax requirements, the House and Senate will have to pass legislation raising the tax that American companies pay on foreign profits to 15 percent, or higher, from 10.5 percent.

Democrats expect that they can pass a global tax increase along party lines using a legislative procedure called budget reconciliation that would not require support from Republicans. However, enacting other changes that will be needed to address taxing rights over large international companies will be more complicated and could require the backing of some Republicans.

European governments are watching anxiously to see whether Mr. Biden can get the legislation passed to ensure that the United States is in compliance with the deal that it helped broker.

If that happens, France, Britain and other governments have said they would drop unilateral taxes that they have been levying on Silicon Valley companies, which nearly touched off a trans-Atlantic trade war. Countries have been debating the timing of the removal of those taxes, with European nations arguing that they should remain in place until the agreement is fully enacted around the world.

The sputtering talks gained momentum last May when the United States agreed to accept a minimum tax of at least 15 percent, which was lower than the 21 percent it was hoping to secure.

At international forums during the summer, negotiators grappled over potential carve-outs, an implementation period and how the agreement wold be enforced once enacted.

Among the biggest questions were how the European Union would cajole holdout countries such as Ireland, Estonia and Hungary, whose economic models have been built around low tax rates, to sign on. Without unanimity in the European Union, the agreement cannot be enacted.

With those three countries now joining the deal, the agreement is on its way to becoming a reality.

Hungary said that it would sign on to the accord after Prime Minister Viktor Orban, who has been at odds with the European Union on unrelated rule-of-law issues, held out for better terms to ensure that the nation’s economy wouldn’t lose a competitive edge.

Hungary has long offered a 9 percent corporate tax rate to lure investment. It wrested an exemption that would let multinationals reduce profits subject to the minimum tax for a transition period of 10 years, rather than the five years originally proposed.

“We have managed to reach a breakthrough on the global minimum tax deal,” the Hungarian finance minister, Mihaly Varga, said. “So Hungary could join the deal with a good heart.”

Ireland came around after securing a commitment that its smaller companies, with annual revenues under 750 million euros, would not face the new higher tax. It also persuaded counterparts to drop the words “at least” from a draft of the O.E.C.D. statement, ensuring that the minimum tax would not be ratcheted higher.

“I am satisfied that Ireland’s interests are better served within the agreement from my contact and negotiation with international stakeholders in Europe, the United States and beyond,” Paschal Donohoe, Ireland’s finance minister, said in a statement on Thursday.

And Estonia announced its backing of the deal Thursday after resolving concerns that a minimum tax could harm the country’s entrepreneurs.

The Biden administration had been pushing for the deal, in part, because persuading the rest of the world to raise their tax rates would give the United States more leeway to increase its domestic rates without making American companies less competitive.

A blueprint introduced by House Democrats last month essentially rewrites tax rules for multinational companies in a way that would allow the United States to join the rest of the world in cracking down on tax havens. But some international tax measures, including tightening up foreign tax credits for companies, would also be eased under the plan.

Ms. Yellen expressed optimism on Friday that the coming changes would be beneficial for the United States and the world.

“The global deal will stabilize an eroding international tax system that has been plagued by a chaotic array of unilateral measures that reflect growing dissatisfaction with a set of rules and norms that fail to consider the modern reality of increased globalization and digitalization,” she said.