Go ahead, give up chocolate for Lent. 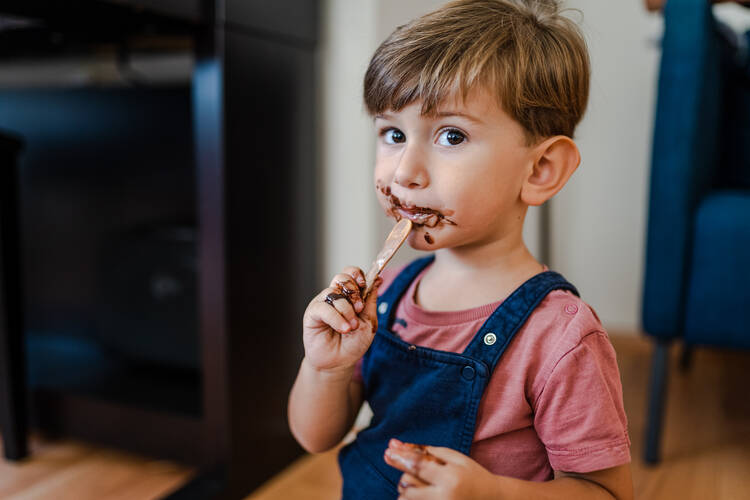 An old woman asked a young girl—her name was Cassidy, if I remember right—what she planned to give up for Lent. Cassidy said she was going to give up popcorn.

“Popcorn!” the old woman scoffed. Pathetic! In her day, girls used to do real penances, make real sacrifices, she said. Cassidy should give up all desserts, at least. Or chocolate. When she was a child, she gave up chocolate, she said.

Cassidy mumbled that her dad would make her popcorn every night and she ate it while they watched basketball on the couch together. It actually sounded like a large and meaningful sacrifice, but the old woman’s message had hit home. Her Lenten practice was not good enough. It was childish, not meaningful.

The moral of this story? If someone asks you what you’re giving up for Lent, run away!

Or, an even better moral: When you’re deciding what to do for Lent, be childlike, not childish.

The moral of this story? When you’re deciding what to do for Lent, be childlike, not childish.

Here’s what I mean. When someone argues “Don’t just give up chocolate for Lent” they are using shorthand for the idea that giving up some little food treat is a cheap and childish way to sneak through the season. They’re saying that it means we’re just checking off the “sacrifice” box and skating by, and if we expect some kind of true spiritual growth, we should be seeking something more meaningful and profound. Rather than giving up chocolate or something else, we should be adding something, some spiritual practice, some good works, some new and challenging way of approaching the day or each other or God.

And this may be true. Sometimes when people “just give up chocolate for Lent,” it’s because they’re doing the easy, thoughtless thing. Sometimes it makes sense for us to urge each other to dig a little deeper, look a little harder at our spiritual lives, and think a little longer about what the Lord is asking from us.

But this year, in particular, feels different. And I think it calls for a different approach.

This year, in particular, feels different. And I think it calls for a different approach.

We’ve all been through the wringer, in one way or another. Lots of people have had their faith shaken, and we may find ourselves facing Lent 2022 with especially low enthusiasm and especially ramped up cynicism. Many of us are grieving. Many of us are physically healing, or still suffering. It has been a soul-crushing, exhausting time of constant risk assessment, constant weighing of expectations against reality and the constant wretched need to question other people’s trustworthiness—all while still trying to keep alive some spark of hope and good will toward our fellow man. When is the last time it hasn’t been Lent? And now you’re telling me I need to impose some new wound, this time self-inflicted?

That’s how I feel. But in my heart of hearts, I know that is not what Lent is meant to be. So I find it helpful to ask myself, when I’m discerning some spiritual practice: Is this childish? Or is it childlike?

Lent has a way of uncovering some very old spiritual patterns in our lives, for better or for worse. It can drag up foolish, half-baked, fairy tale notions that God is mad at us, and that we can fend him off by throwing little sacrifices in the path of his rampage. And it can also uncover long-buried memories of how simple our spiritual lives could be, when we simply went to the Father to tell him we are sorry for our sins, and he told us that it was all right, because He loves us. This is the difference between childish, and childlike.

To become like a little child is advice straight from the mouth of Christ. And we can do this in our penances, as well.

Trying to be childlike is always a good place to go when I’m feeling weak and tired and burnt out. To become like a little child is advice straight from the mouth of Christ. And we can do this in our penances, as well. We can let the ancient practices of Lent (which often did center around food!) remind us of how simple our relationship with Christ really can be, because no matter what else has happened in the world, Christ is unchanging, Christ is worthy of all trust. We really can simply say: I’m sorry for my sins. And He will simply say: It’s all right, because I love you. Any Lenten practice that reflects that conversation is a good and worthy one.

So let’s look at the question of giving up chocolate as a penance, for example. Is that childish, or childlike? The truth is, it could go either way.

If you’re doing it purely because you want to look extra hot when spring break comes, and you know you’ll stay on track for 40 days if you use God as a stick, that’s childish.

If you’re aware you have a problem with self-control and you are asking God to heal you of this particular weakness in yourself, that’s childlike.

If giving up chocolate will be difficult, and you’re toughing it out (along with eleven other elaborate penances and practices) because it will prove how hardcore you are, that’s childish.

If giving up chocolate will be difficult because you never follow through with anything, but you have made a firm resolve to pray for help in your weakness every day, and you intend to just pick yourself up and start again when you do fail, rather than indulging in shame spirals, then that’s childlike.

If you love chocolate but you think God doesn’t like you, so you don’t get to have any chocolate because you don’t deserve it, that’s childish.

If you love chocolate but you know that skipping that sweetness will catch your attention and maybe give you a chance at building up a hunger for the sweetness of Christ, that’s childlike.

If your main interaction with your faith is to complain about other Catholics on Twitter, and you can’t remember the last time you offered anything resembling sincere prayer, but when it comes down to it, you feel vaguely guilty and nervous about doing nothing for Lent, so you give up chocolate because it’s easy, and the little mental puppet you’ve labeled “God” shuts up when you do it, that’s childish.

Myself, I am starving to remember deep in my heart that, even if no one else in the whole entire world can be relied upon, Christ can. I am starving for something sweet, not like chocolate, but like Christ. If giving up chocolate helps me remember that, I’ll give up chocolate.