God created our bodies. We should beware ideas that reject them. 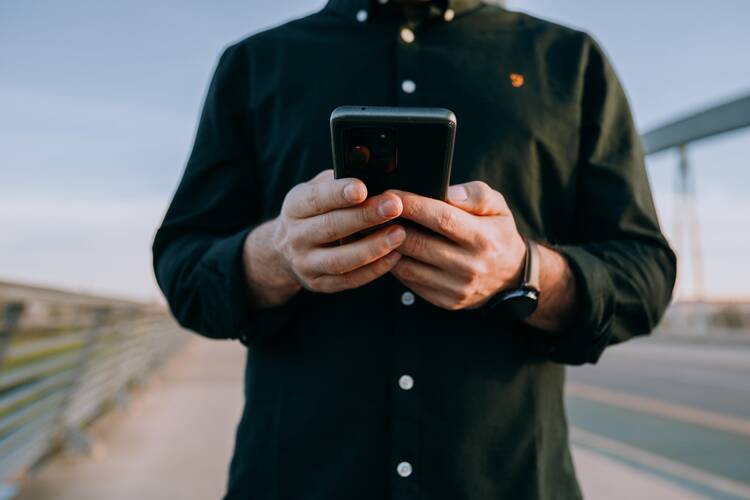 A Reflection for the Third Sunday of Lent

We should worry when we cannot understand even the mere meaning of sacred Scripture, when it reflects a view of the world which we no longer share or even comprehend. No more so than when a direct command of God now seems stilted, superfluous.

From the Burning Bush, the Lord tells Moses,

Come no nearer!
Remove the sandals from your feet,
for the place where you stand is holy ground (Ex 3:5).

Why is this command so out of sync with our current spirituality? The temptation long predates Christianity itself; the faith has struggled with it from the beginning; yet now the ancient heresy may be posed for victory: We think that spirituality involves only the spirit. We disparage the body as unholy, something that we share with mere animals and an impediment to the mastery of our minds over the world.

The internet has become the exemplar of the modern person, who still evidences that ancient desire to stand in the place of God. How so? Because entire worlds of information, pleasure and outright pruriency are at our disposal. Only one thing is absent from the world of the web. Ourselves. We stand outside it, sovereign, disembodied minds who dispose of digital worlds as we see fit. In contrast, the real world—and real people—neither appear nor disappear with the click of a mouse.

The internet has become the exemplar of the modern person, who still evidences that ancient desire to stand in the place of God.

One can read the temptations of a culture in its fantasies. Our science fiction increasingly imagines the final severance of the mind from its enveloping, natural environment. Perhaps, someday soon, your consciousness can be digitized, downloaded and later launched into an eternal cyberworld over which it will stand immortal and undefiled.

Of course, like all science fiction, the fantasy implodes when one asks the right question. Here, that question is: Is the mind a computer of consciousness, sitting in a biological brain, one which can be transferred into a digital world? Or is the human mind better compared to the internet itself, a reality formed by interchange with other minds?

Small wonder that so many Christians asked themselves, during the height of the pandemic, why they should attend Eucharist when they could watch it. The answer to that question? What you only watch, when and where you like, may be a necessary, salutary form of meditation, but is something less than the Eucharist our Lord gave us.

The Eucharist exists as our way of communing with the God who became flesh. Therefore, it remains subject to those very demands of the flesh, which we increasingly reject.

The Eucharist exists as our way of communing with the God who became flesh. Therefore, it remains subject to those very demands of the flesh, which we increasingly reject: It must be in a certain place, at a certain time, with an assembled group of Christians who are themselves enfleshed spirits. They must come together, see and touch one another, be mutually fed.

As noted, the temptation of the spirit to shed the body is old. In the third century, the Latin Church Father Tertullian had to remind Christians that prayer is the work of both body and soul. Christ sanctified both.

We feel pained should any wine or bread, even though our own, be cast upon the ground. At every forward step and movement, at every going in and out, when we put on our clothes and shoes, when we bathe, when we sit at table, when we light the lamps, on couch, on seat, in all the ordinary actions of daily life, we trace upon the forehead the sign [of the cross] (On the Crown of a Soldier 3).

A century later, in the East, one finds St. Basil the Great musing on the meaning of kneeling and standing, insisting that the spirit finds expression in the flesh.

Every time we fall upon our knees and rise from off them we show by the very deed that by our sin we fell down to earth, and by the loving kindness of our Creator were called back to heaven (On the Holy Spirit 27. 66)

One could keep on citing the Fathers, or Scripture itself, because there have always been spiritualities that reject the world as base, the body as a burden and history itself as an illusion. These spiritualities do not change the world by engaging it; they spurn it.

A faith that proclaims God made flesh cannot join them. This world is loved by God; Christ sanctifies us by means of sacraments, which are defined by their material manifestations; and, finally, we are called to redeem and transform the world, not flee from it.

God did indeed create pure spirits to serve and to glorify him. They are called angels. But God created us men and women to be of flesh and blood.

Our Lord grew frustrated when his listeners, like contemporary cable news junkies, dispassionately discussed the sufferings of other people, all the while refusing to recognize that their own time had come, that the Lord himself stood in their midst. They wanted to watch fate play out, not stand before it. How rightly Christ warned them of the barren fig tree!

Beware of ideas that disparage our bodies. We have certainly defined genders too narrowly, but we should worry when a person says: “This body will not do. It is not who I am. I will take the knife to it.” And what is a totalitarian ideologue if not someone who says, “I do not care how many bodies are bombed. I know the identity of this people.”

No, we can no longer easily comprehend why Moses should need to remove his sandals. Or why he “hid his face, for he was afraid to look at God” (Ex 3:6b). But how else does a creature acknowledge the entrance of the creator into creation?

God did indeed create pure spirits to serve and to glorify him. They are called angels. But God created us men and women to be of flesh and blood. We must come together, be fed. We cannot be ourselves without communion with others. Yet we are not lower than the angels!

For to which of the angels did God ever say:
“You are my son; this day I have begotten you”?