One week ago, when traders were still enthralled by the ongoing marketwide short squeeze, which started off as an isolated reddit attempt to (successfully) punish GME shorts such as Melvin Capital, and which cascaded into a widespread liquidation of most popular names as a wave of VaR shocks hit countless hedge funds which had no choice but to rapidly degross and puke their most popular, liquid and profitable positions as their shorts spiked unleashing industrywide margin calls and leading to the biggest alpha drawdown in history… 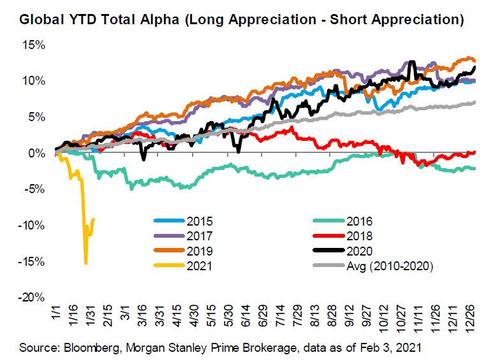 … we summarized recent events in a simple and succinct fashion: “What it all boils down to: the market has been broken since 2009, but broken in moderation and everyone is happy, the rich get richer, etc. But if someone (WSB, whoever) take this breakage to its absurd extreme (where stock prices no longer reflect anything), everything breaks”

What it all boils down to: the market has been broken since 2009, but broken in moderation and everyone is happy, the rich get richer, etc.

But if someone (WSB, whoever) take this breakage to its absurd extreme (where stock prices no longer reflect anything), everything breaks

And for a few seconds… everything did break, and only the rapid intervention of regulators/DTCC forcing Robinhood to effectively shutdown trading is what gave the system on full tilt the critical time it needed to take a breath force a reset and reverse the momentum.

Now, in a post-mortem to recent events, Goldman – which last week warned that if the squeeze isn’t halted, the consequences for market could be dire – wrote a somewhat lengthier take on what happened but its conclusion is similar: the price formation mechanism – and the fundamental investing process itself – broke when millions of retail investors (and a handful of very wily hedge fund investors) plowed into a the most shorted stocks, leading to an unprecedented disconnect between price and value.

It certainly explains why Goldman’s David Kostin starts off with what may well be the best quote to describe recent events:

More than a century ago and written in a completely different context, Oscar Wilde, the Irish playwright, penned a perfect description of the social psychology underpinning a short squeeze. In Lady Windermere’s Fan, one character asks, “What is a cynic?” The friend responds, “A man who knows the price of everything, and the value of nothing.” The dialogue continues, and the original inquirer states, “And a sentimentalist is a man who sees an absurd value in everything, and doesn’t know the market price of a single thing.”

Needless to say, a lot of cynics and sentimentalists were unleashed in the past two weeks.

As Kostin recaps recent events, “every financial market participant knows the recent sequence of events. An extraordinarily high short interest position in a few small cap stocks, most prominently GameStop (GME), was stampeded by a group of social media inspired retail investors. A flurry of odd-lot cash orders and out-of-the-money call options supercharged the stock price and forced short-covering at higher and higher share prices. The situation was compounded because the retail buy orders were placed with broker-dealers which suspended processing trade orders in order to meet the minimum capital requirements of the Depository Trust & Clearing Corp (DTCC). This sequence of events happened within just a few days and caused an epic short squeeze. Billions of dollars were made and lost as share prices rocketed higher and then collapsed within the span of a week.”

But so what: it’s not like this was the first time something like this happened: after all back in Sept 2008 when the world was crashing, a similar short squeeze made Volkswagen the world’s most valuable company… if only for a few hours.

Well, it appears this time was different because unlike back then, the current squeeze happened in a context where virtually everyone was forced to reassess the core principle and tenets of capital markets, or as Kostin poetically puts it:

The market implications of the stock price swings are both very significant and completely inconsequential.

Expounding on this claim, the Goldman chief market strategist says that “those two assessments are not in conflict.” Laying out the case first for why the marketwide short squeeze was a tempest in a teapot, to use the parlance of Jamie Dimon, Kostin says that while what happened was although certainly dramatic, “the wild price action of a few small-cap stocks was dwarfed by the rest of the companies in the market both in terms of scale of business activity and equity capitalization. Corporate fundamentals have been much stronger than expected. During the past month, upward estimate revisions for full-year 2021 EPS have occurred across all 11 sectors. Last week, S&P 500 fell by 3.6% from a then-record high. This week, it rebounded to establish a new high and is up 3% YTD.”

Ok fine, but good luck telling Melvin Capital (or Ken Griffin, or Steve Cohen for that matter) that what happened was “completely inconsequential.” They are more likely to focus on the “yes but” part of Kostin’s assessment, namely that…

The disorderly sequence of events has implications for market structure and oversight. The House Financial Services Committee has scheduled hearings on February 18th to explore recent market volatility in a session titled: “Game Stopped? Who Wins and Loses When Short Sellers, Social Media, and Retail Investors Collide.” Topics likely to be addressed include payment for order flow, capitalization of broker-dealers, rejection of customer trade orders, trade settlement, mechanics of price-vs. liquidity-driven short-covering, and the gamification of retail investing.

Going back to the actual squeeze, Goldman writes that several aspects of the trading in GME shares are worth noting. 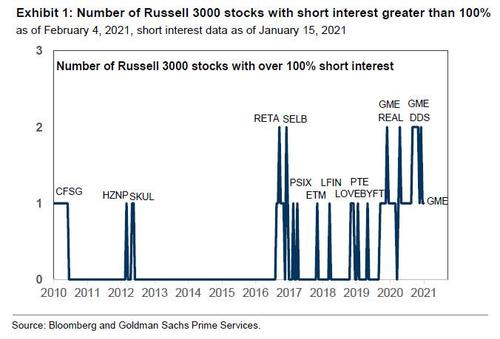 Second, and going back to the quote above, Kostin notes that “the acerbic lines from Wilde’s 1892 play perfectly capture the situation: The entire episode was all about price, and nothing about valuation” as “social media commentary typically referenced price action with lofty targets sometimes illustrated with rocket ship emojis. We almost never read a comment about valuation because the rally implied an astronomical P/E multiple.” Great point David – now maybe you can extrapolate a little beyond what you just said, and tell your clients some more about how the trillions in liquidity sloshing around market have made price and valuations so disonnected even you are forced to only showing the hilariously wrong Fed model as the only justification to keep buying stonks so they can hit your year-end price target of 4,300. Yeah, didn’t think so…

Still, that didn’t stop the Goldman strategist from decomposing Oscar Wilde’s quote into its components as they applied to GME: 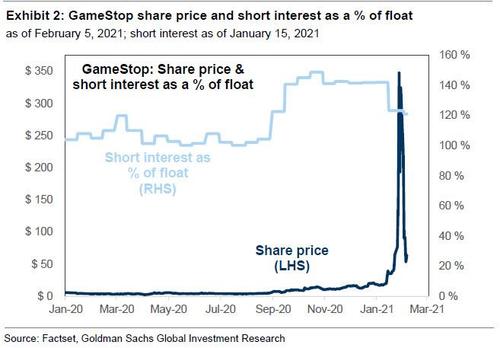 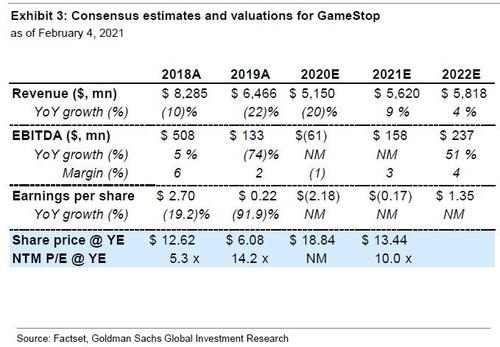 Next, the Goldman chief strategist stubbornly keeps trying to make the point that what happened was an aberration of efficient markets and a “completely inconsequential” impossibility from a fundamental standpoint, as if anyone would even dream of arguing that GME would ever trade above $500 on its own merits…

The absurdity of the January spike in GME share price becomes readily apparent when viewed through the lens of implied valuation. The implied P/E on projected 2022 EPS two years into the future soared from 14x at year-end 2020 to more than 250x at the peak on Jan 27, before retreating to the current P/E of 42x. For context, the shares of Tesla (TSLA), a stock that has both skeptics and cheerleaders around its valuation, but is widely viewed to have strong growth prospects –consensus forecasts a doubling in sales and a quadrupling of EPS between 2020 and 2022 –trades at 140x expected 2022 EPS following its stunning 780% rise last year (just half the percentage gain in GME shares in January 2021). The more mundane S&P 500 index trades at 20x our 2022E EPS of $196.

… without even for a second stopping to consider that it was the Federal Reserve that made this peak absurdity possible. Why? Because in a market where virtually all valuations are in their 100% percentile…

… and where the thread between price and value is barely present across most “serious” companies which are trading at 100x or even 1000x of future earnings and revenues, all the GME daytrading public did was to sever any pretense of linkages between fundamentals and prices and as a result, quickly took prices to their absurd extreme which in the case of GME meant $513.12 per share early in the morning of Thursday, January 28… 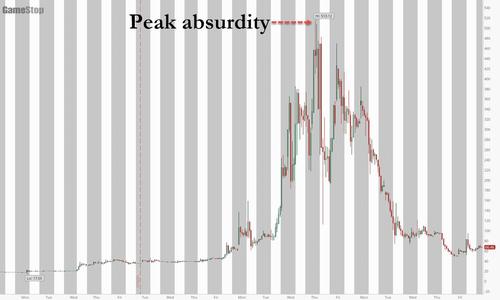