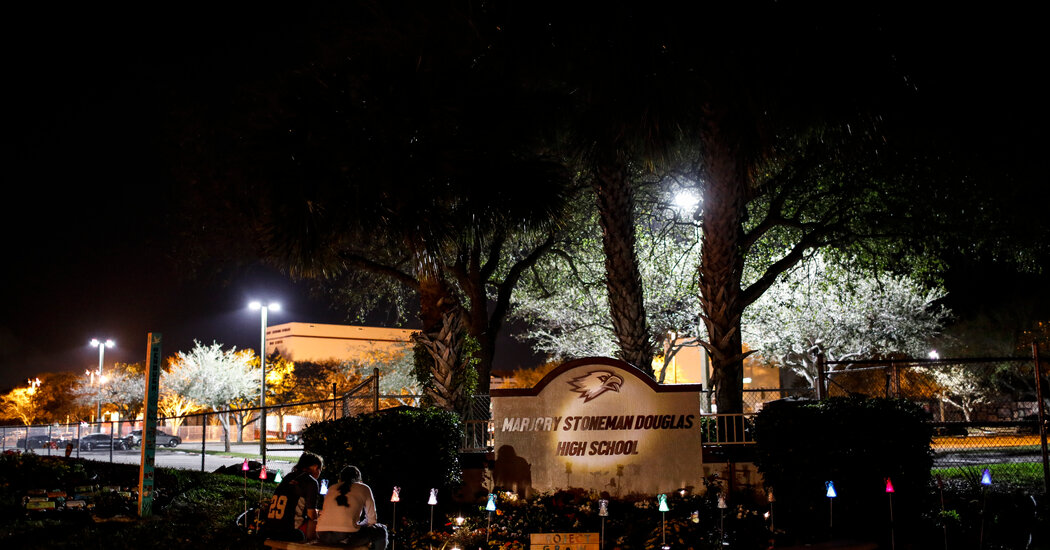 The former student who waged a deadly attack against his classmates and teachers in Parkland, Fla., in 2018 pleaded guilty on Wednesday to the premeditated murder of 17 people and the attempted murder of 17 others, leaving his fate — either spending his life in prison or facing execution — in the hands of a jury.

The 34 guilty pleas were enumerated in a somber courtroom filled with the families of those who were killed and injured at Marjory Stoneman Douglas High School on Feb. 14, 2018. The community had braced for perhaps a monthslong trial but now soon faces what could be a grisly penalty phase as the state seeks to put the former student, Nikolas Cruz, to death.

Mr. Cruz, wearing a blue shirt under a black sweater vest, pleaded guilty after the judge read a lengthy list of questions about whether he understood the gravity of his plea and that it could lead to his death. He responded with “guilty” 34 times as Judge Elizabeth Scherer read each charge — including each victim’s name — and asked how he wanted to plea.

Armed with a legally purchased semiautomatic rifle, Mr. Cruz, then 19, killed 14 students and three faculty members and injured 17 more people in one of the deadliest school shootings in American history. “You’re all going to die,” Mr. Cruz said in one of three videos he recorded on his cellphone before the shooting. Outraged Parkland students helped ignite a national movement of young people against gun violence.

The Parkland case will be the rare instance of a mass shooter who lives to see any sort of trial, since many of them end up dying in their attacks. The white supremacist who killed nine members of a Black church in Charleston, S.C., in 2015 was tried in federal court, found guilty and sentenced to death. The gunman who killed 12 people at a movie theater in Aurora, Colo., in 2012 pleaded not guilty by reason of insanity in state court, was found guilty and sentenced to life.

From the start, Mr. Cruz’s lawyers said he would agree to plead guilty in exchange for life imprisonment. But the top prosecutor in Broward County at the time of the attack, Michael J. Satz, said he would pursue the death penalty. Mr. Satz’s term as state attorney has since ended, but he is still leading the case.

Defense lawyers did not discuss the reason for the decision to enter a guilty plea despite the risk of execution, but legal analysts said it could provide advantages. Once a defense lawyer has determined that a guilty verdict is unavoidable, arguing otherwise might only burn good will with jurors, said William N. Nettles, a former United States attorney in South Carolina.

“In cases like that, it’s often the best course of action to decline to fight a losing battle and instead fight a battle that you might win — and that’s the sentencing battle,” he said.

During sentencing, the defense can present mitigating evidence that would not typically be admissible during the guilt phase, such as background about the defendant’s childhood or “anything they can do to inject to the jury something humanizing,” said George Brauchler, a former district attorney in Colorado who prosecuted the gunman in the Aurora shooting.

“We get to go to a jury and say, ‘Our client did wrong, and he admits he did wrong, but this young man is redeemable at some level, even though he doesn’t deserve to take a free breath again,’” he said.

In Mr. Cruz’s case, Judge Elizabeth Scherer will make the final determination after a jury makes its recommendation. There are 305 people on death row in Florida; the state executed an average of three people each year from 2010 through 2019.

Last week, Mr. Cruz, now 23, pleaded guilty to battery and other charges in a separate case related to a jailhouse fight with a sheriff’s deputy that was supposed to go to trial this week. The judge scheduled Wednesday’s hearing on the shooting case in a larger courtroom to accommodate victims’ families, a gaggle of reporters and a livestream on Court TV.

Mr. Cruz had a history of mental health and behavior problems, many of them documented by the public school district. Victims’ families recently reached a $25 million settlement with Broward County Public Schools over the shooting.

The money will go to the 17 families who lost loved ones, 16 of those who were injured and 19 survivors who suffer from post-traumatic stress or other conditions, according to David Brill, who represents four of the victims’ families and one of the injured.