Home  »  News   »   Hedge Fund CIO: "I Didn’t Realize How Many People Understand The Extent Of The Fed Market Manipulation"

Hedge Fund CIO: “I Didn’t Realize How Many People Understand The Extent Of The Fed Market Manipulation”

By Eric Peters, CIO of One River Asset Management

“I was looking through reddit chatrooms, wallstreetbets, you know,” said the PM. “Kind of felt surprised by the chatter. I didn’t realize how many people out there understand the extent of the Fed market manipulation that occurred over the past year. Ever since 2008 really,” he continued.

“Not sure why it grabbed me. I suppose I’ve just been under this illusion that it’s mostly people in our industry who see through what has been happening, and that the rest of the people working in random industries, with real jobs, haven’t understood it.” I nodded, faith in our institutions gradually slipping away. “The level of disillusion with the system is kind of breathtaking – I just didn’t appreciate how widespread it seems to be.”

BernieSanders.com:  “73% of the benefits of cancelling all student debt will go to the bottom 80% of Americans, making less than $127k a year,” says Bernie’s website. “Trump’s tax cuts for the wealthy and big corporations cost more than $2trln, 83% of which will end up going to the top 1%. Money would be better spent on freeing millions of hardworking people from the burden of student debt, boosting the economy by $1trln over the next 10yrs, and creating up to 1.5mm new jobs every year. By canceling student debt, we will save the avg student loan borrower $3k/yr. That money will be freed up to spend on everything from housing to starting a business.”

Green New Deal:  “The GND will convert the old, gray economy into a new, sustainable economy that is environmentally sound, economically viable and socially responsible,” states the GND manifesto. “It seeks to solve the climate crisis by combining quick action to get to net- zero greenhouse gas emissions and 100% renewable energy by 2030 along with an Economic Bill of Rights which ensures all citizens the right to employment through a Full-Employment Program that will create 20 million jobs by implementing a nationally funded, but locally controlled direct-employment initiative. We will replace unemployment offices with local employment offices offering public sector jobs that are “stored” in job banks in order to take up any slack in private sector employment.”

“The 2020 recession was 5x the average since WWII but it occurred in 25% of the time,” said the investing Legend in an interview. “In a year when 11mm people were unemployed, we had the largest increase in personal income in 20yrs, due to massive policy support. The CARES Act increased the deficit in 3mths by more than the past 5 recessions combined. The Fed in 6wks bought more treasuries than in 10yrs under Bernanke/Yellen. Corporate borrowing (almost always goes down in a recession) which had already increased from $6trln to $10trln going into the crisis due to the Fed’s free-money policies, went up $400bln (in the GFC it contracted by $500bln).”

“The juxtaposition of the US/China policy response is breathtaking,” continued the Legend. “Since 2018, M2 money supply in the US has grown 25% more than nominal GDP. In China, it is where it was 3yrs ago. 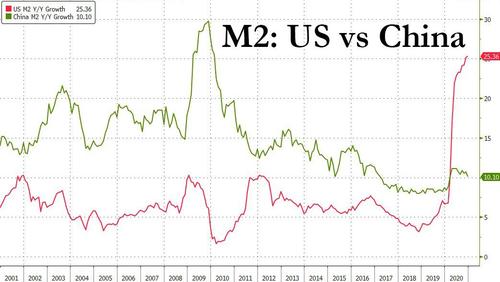 So China hasn’t borrowed anything from their future while we’ve had a massive liquidity input but very little investment – mostly transfer payments and Fed stimulus. And we’ve done a horrific job with the virus. The Chinese and Asia broadly have pretty much defeated it. All this stimulus will be in place and increasing just as vaccines kick in and we unleash the greatest increase in pent up demand globally since the 1920s. Which could make the world look awfully different. This could not be more exciting for a macro investor.”