Independent research shop Hedgeye has filed a lawsuit against one of its former employees-turned-competitors, Darius Dale, alleging that Dale stole trade secrets from the company. Dale has since started his own research firm, called 42 Macro LLC.

According to Dale’s LinkedIn, he worked for Hedgeye for 11 years and 9 months, most recently as a managing director.

The complaint, filed in the U.S. District Court for the Southern District of New York, is allegedly “to prevent the further trade secret misappropriation by a departing senior employee.”

It accuses Dale, upon his resignation from Hedgeye on March 28, 2021, of copying “dozens of computer files comprising gigabytes of information from his company computer to a private Dropbox account” and then “using those files, sophisticated financial models refined by Hedgeye over more than 10 years, in a competing business that he created prior to his departure from Hedgeye”.

The accusations appear to center around Hedgeye’s proprietary GIP model, which the lawsuit alleges Dale claimed he was “the inventor” of. 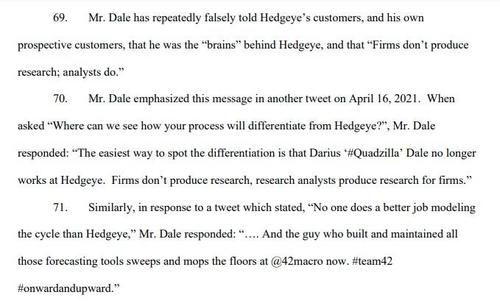 “Mr. Dale was a college senior, not part of the workforce, when Hedgeye was founded in 2008. Hedgeye’s GIP model, the cornerstone of the firm, had been fully developed by the time Mr. Dale was hired, 18 months later, as a junior analyst straight out of school without any work experience,” the lawsuit alleges.

In fact, Mr. Dale took one critical file that Hedgeye has not been able to recover. In other words, Mr. Dale did not just “copy” that file, he actually destroyed Hedgeye’s only copy. The file, named “PRICE VOLUME VOLATILITY.xlsx,” is a dynamic source model which took years to develop, and which contains and constitutes Hedgeye’s proprietary and confidential information and trade secrets.

Hedgeye also filed a temporary restraining order, asking Dale to preserve and deliver the Hedgeye computer files in question. The order was granted: 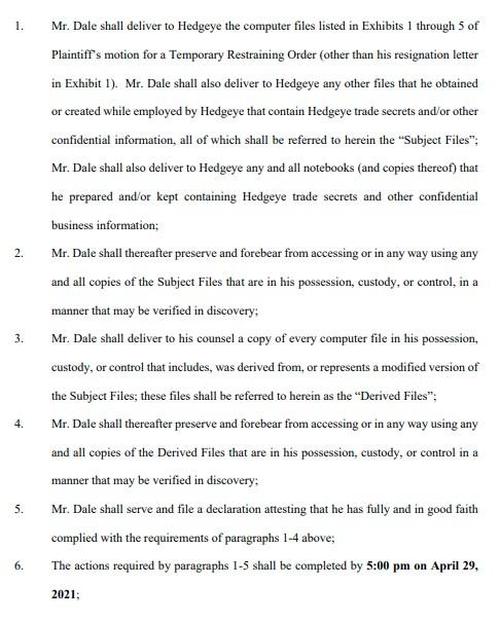 FWIW, I do not have a non-compete. They offered me < 5 months of pay to essentially end my ability to earn a living on Wall St. with 11 pages of single-spaced restrictions. Naturally I turned their B/S offer down and got to work on @42macro. So here we are today. https://t.co/YYELpzJZMT

We will continue to follow the story as details become available.