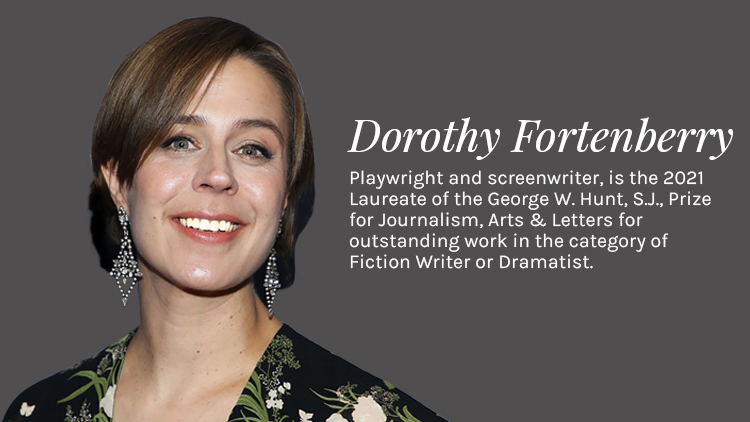 Join us for this Livestream Event as we honor the 2021 Hunt Prize Laureate, Dorothy Fortenberry, at Saint Thomas More Catholic Chapel & Center at Yale University.

You may sign-up to receive a link in your email to the livestream by clicking here.

Dorothy Fortenberry has worked for four seasons as a writer/producer on Hulu’s award-winning adaptation of Margaret Atwood’s novel The Handmaid’s Tale. Before that, she spent three seasons writing on CW’s hit young adult series The 100. Currently, she is a writer and executive producer on Extrapolations, an upcoming limited series for Apple TV+ that focuses on climate change. She has developed original series, adaptations, and screenplays for Bravo, Paramount, Hulu, and MGM.

Ms. Fortenberry is a winner of the 2011 Helen Merrill Emerging Playwrights Award. Her plays include Species Native to California, Partners (Susan Smith Blackburn Award nominee), Mommune, Status Update, Caitlin and the Swan and Good Egg. Her work has been developed at Arena Stage, Ars Nova, Geva Theatre, and the Oregon Shakespeare Festival, among others, and produced by theaters across the country, including the Actors Theatre of Louisville and IAMA Theatre Company in Los Angeles. Her new play The Lotus Paradox, a commission from Yale Rep, will receive its premiere at the Warehouse Theatre in Greenville, South Carolina in 2022. She has received an EST/Sloan commission, a fellowship to the MacDowell Colony, a residency at the Djerassi Program, and a Walter E. Dakin Fellowship at the Sewanee Writers’ Conference.

Ms. Fortenberry is a graduate of Harvard College, the Yale School of Drama and is a past recipient of a Rockefeller Fellowship, which allowed her to live in Haiti and work with formerly homeless youth.

About the Hunt Prize

The George W. Hunt, S.J., Prize for Excellence in Journalism, Arts & Letters, was established in 2014 to honor the memory of George W. Hunt, S.J., the longest-serving editor in chief of America magazine, and to promote scholarship, the advancement of learning and the rigor of thoughtful, religious expression; to support and promote a new generation of journalists, authors and scholars; and to support the intellectual formation, artistic innovation and civic involvement of young writers. Previous recipients of the Hunt Prize are: Dr. Philip J. Metres III, of John Carroll University; Elizabeth Dias, of The New York Times; Liam R. Callanan, of the University of Milwaukee-Wisconsin; Phil Klay, of The American Scholar; Mary Szybist of Lewis & Clarke College, and Emma Green, of The Atlantic.