Update (1350ET): With COVID cases finally on the decline, the UK is apparently taking no chances, with HMG announcing that travelers to the UK will be tested twice upon arrival.

In New York, hospitalizations appeared to stall in their decline.

Today’s update on the numbers:

Total COVID hospitalizations are at 7,937.

Sadly, there were 153 fatalities. pic.twitter.com/2Y8JHdq2Vy

93% of first doses allocated to NYS health care distribution sites have been administered as of 11am today.

Notably, hospitalizations in New York are falling, but not as quickly as other former hotspots, according to Bloomberg. 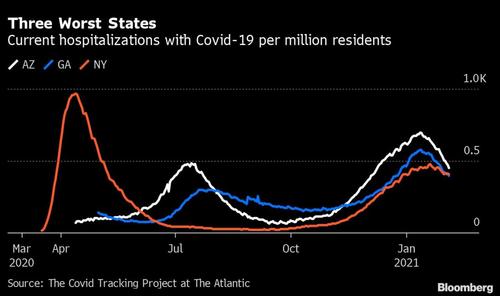 The Empire State has 410 people per million residents hospitalized with the virus, down 14% from Jan. 20, its latest peak. Meanwhile, Arizona and Georgia, also hit hard, have seen their numbers drop by 29% and 27%.

In other news, Spain has joined the club of EU nations that have approved the AstraZeneca-Oxford COVID-19 vaccine, while SinoVac has just published data showing its jab is 91.3% (according to China’s numbers).

Update (1030ET): Depending on the data provider, the US reportedly cracked 5K deaths on Thursday, which is technically the highest daily tally yet – except for the fact that 1.5K of those deaths were delayed reports from the state of Indiana. The exact number according to Johns Hopkins was 5.08K new deaths and 122.5K new cases, while some data providers like the COVID Tracking Project stripped out the Indiana numbers. The additional Indiana deaths were added after an “audit” of the state’s prior numbers.

Vaccines are once again the top COVID-19 story on Friday as AstraZeneca and Oxford have returned with even more data about their jab. This time, the data purport to show that the vaccine is, in fact, effective against the B.1.1.7 mutant strain first isolated in Kent. Anxiety about the ability of a mutating coronavirus has intensified ever since trial data appeared to show that Novavax’svaccine was only 50% effective in blocking the mutant strain from South Africa.

It wasn’t the only vaccine news from Friday morning: Johnson & Johnson shares rose after the company said it had asked US health regulators to authorize its single-dose COVID-19 vaccine for emergency use, and that it would apply to European authorities in the coming weeks. The company, the world’s biggest drugmaker, released data showing the vaccine, which will be doled out in a single dose, isn’t as effective as its rivals. 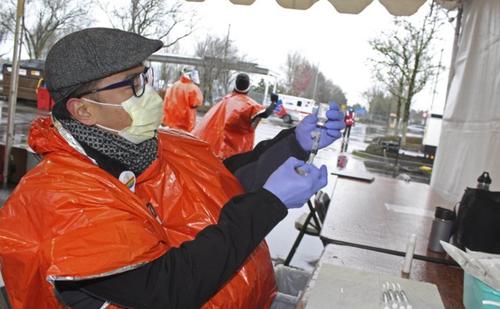 The vaccine data dropped a week ago, and already western nations are warring over supplies. A group of EU leaders from Austria, Greece, Denmark and the Czech Republic sent a letter to European Commission President Ursula von der Leyen warning that JNJ should be forced to keep vaccines which must reportedly be sent to the US for “fill and finishing” in Europe – and find some other way to get the job done – if shipping the vaccines overseas might somehow jeopardize EU access to the vaccines.

As COVID cases finally show some signs of easing in the UK, the British government has made a deal with CureVac whereby the company will deliver an initial supply of 50MM doses against COVID-19 variants. Britain will require travelers arriving from coronavirus hot spots to quarantine in hotels starting Feb. 15, almost three weeks after the plan was announced by Prime Minister Boris Johnson.

In response to news in the west that a trial would be run involving the Moderna and Pfizer COVID vaccines, Russian vaccine developers are reportedly in discussions with China’s CanSinoto test a combination of their shots reportedly aimed at showing better results. In Hungary, the first EU member to approve both the Russian and Chinese coronavirus vaccines, Prime Minister Viktor Orban said Friday that Hungary could gradually return to normality this spring by inoculating the most exposed people by March 15.

As case numbers and hospitalizations decline in the EU, Germany is reportedly considering yet another extension of its COVID-19 lockdown, while French President Emmanuel Macron faces increasing pressure to consider a third lockdown in France.

Globally, COVID cases declined day over day, with the overall trend seen as moving lower still. The total number of cases was just under 105MM, while global deaths climbed to 2.3MM.

In the US, cases were higher day over day, but overall trends remained lower across the board. 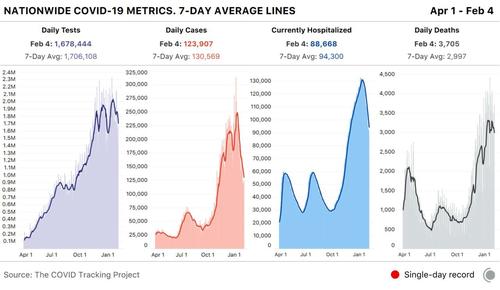 Hospitalizations nationwide continued a streak of declines that began in early January. 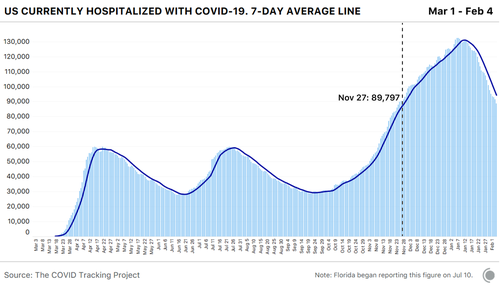 Finally, Pfizer said Friday that it had withdrawn an application for emergency use authorization of its COVID-19 jab in India after apparently failing to meet the drug regulator’s demand for a local study on its safety and ability to provoke an immune response.

Trump will spend 'rest of his years in civil and criminal courts,' Swalwell says

Wall to Wall: Future of Small Business Amid Pandemic