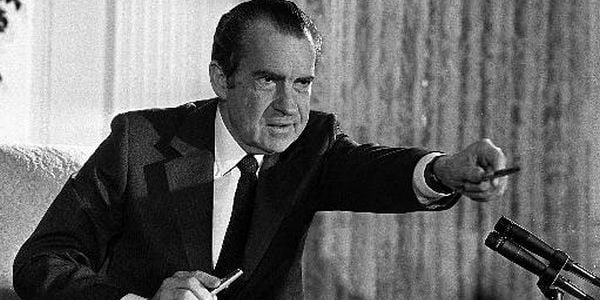 President Nixon during the Watergate scandal

Fifty years ago today, one of the most significant occurrences in the modern presidency took place. No one was impeached, there was no scandal, and no one stormed the U.S. Capitol. No newspapers covered the event contemporaneously, and children do not learn about it in school today. February 16, 1971 is not one that would ever be worth remembering – except that it was the date the Nixon White House taping system began operating.

With a simple flip of a switch, Richard Nixon unwittingly changed how we think about the U.S. presidency. As fellow stakeholders in our democratic system of government, we are both better off and worse off for the act. While the extended wrangling over executive privilege during the Watergate investigation caused distress and consumed a great deal of national energy, I argue that we are better off for the existence of these White House time capsules.

“You see, the purpose of this is to have the whole thing in the file for professional reasons,” Nixon said in the first recorded conversation. “Mum’s the whole word. I will not be transcribed,” he added in one of the only times on the taping system that its operation is discussed. Most of those recorded did not know their privacy was being violated. This seemingly included the president himself: Nixon thought the best way to preserve the words of his presidency was simply to forget the system existed – and he proved to be a Method actor.

The tapes are the only records that document the uncensored operations of a White House as events unfolded. Nixon was not the first president to realize this. His two immediate predecessors, Lyndon B. Johnson and John F. Kennedy, made extensive use of White House taping systems. JFK made some 260 hours of recordings, while the Johnson tapes run to about 800 hours. Franklin Roosevelt was making tapes as far back as 1940.

All of the earlier presidents to use taping systems had one thing in common: They did so selectively. Not Nixon. By recording everything within audible range of the microphones spread across the White House, he did not selectively curate the events of his administration. Nixon understood history well enough to know it is messy. Rather than retaining just the high points, or those that made him look good, he wanted to preserve the mess, too.

In the recordings, we see statecraft played at the highest level. “Play the weaker against the stronger. That’s what we’re doing with the Chinese,” Nixon said a few weeks before his trip to China in February 1972 as Sino-U.S. relations were  in the news – as they are again today. “I deal with the China things for long-range reasons – very, very important reasons,” Nixon added in 1971. Partisanship aside, the world is safer when we have presidents who have the ability to think strategically. We don’t know if President Biden recorded his recent phone call with Chinese Premier Xi Jinping, but he would certainly be following a precedent by doing so.

The Nixon tapes altered the relationship between the rulers and the ruled. We learned how a president really talks. While the sprinkling of four-letters word was shocking when first disclosed, regardless of one’s politics such talk is hardly shocking now. It is safe to say worse things have been said in the Oval Office since then. It made Nixon more human. We demand that presidents are held to account, as we are; we should remember that they are also flawed.

As a result of the tapes, our democracy is stronger. Public officials are held to account. The field of investigative journalism grew exponentially after Watergate. We have more information about how our government runs than ever before. The scandals of the Nixon administration were as much a long-awaited check on executive power – the “Imperial Presidency,” as Arthur Schlesinger Jr. called it – as they were unique to the personalities within Nixon’s White House.

On this commemoration, which immediately follows Presidents Day, let’s remember our leaders. Fifty years after Nixon began making the most controversial subset of White House tapes and more than 80 years since FDR made the very first, these records — while part of popular lore — remain largely underutilized and misunderstood. From each one we can learn something. Rather than canceling them, we should embrace history for what it can teach us.

The post How a 'flip of the switch' 50 years ago made 'our democracy stronger' appeared first on WND.

Previous post: [ Biden's obsession on 'green jobs' to replace oil industry 'a mistake' ]
Next post: [ Jen Psaki: Biden has not ruled out using executive orders to crack down on gun rights ]