How old is too old to lead? Joe Biden and Pope Francis have people asking. 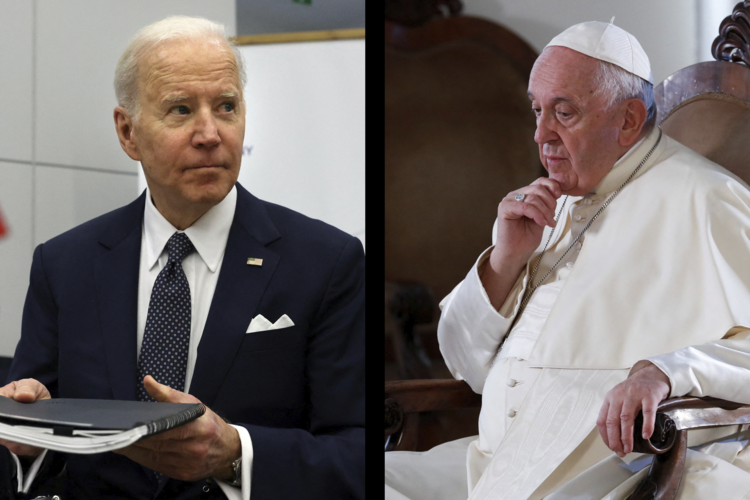 Catholics in the United States are witnessing the leaders of their nation and their church struggle with questions about their advanced age and capacity to lead, with debates in Rome and Washington about whether and when they should step aside. But Pope Francis, 85, and U.S. President Joseph Biden, 79, have engaged these questions differently, offering clues about their leadership styles and priorities.

On Sunday, Pope Francis arrives in Canada for a six-day “pilgrimage of repentance,” during which he is expected to apologize for the church’s part in an abusive government-led assimilation campaign of Indigenous peoples over the past two centuries.

The trip, first announced last fall, was nearly scuttled because of health challenges plaguing the pope.

Pope Francis, 85, and U.S. President Joseph Biden, 79, have engaged questions about their age and capacity to lead differently, offering clues about their leadership styles and priorities.

Francis continues to be bothered by a torn ligament in his knee that affects his mobility. Another planned trip, for early July, to the Democratic Republic of Congo and South Sudan, was postponed because of his knee pain. Some commentators have suggested that the pope looks frail in recent video footage. The church analyst Thomas Reese, S.J., speculated last year that we are witnessing “the beginning of the end of his papacy.”

But recent high-profile interviews not only gave journalists opportunities to question the pope during a time of international upheaval but allowed the Vatican to show that Francis is still in charge.

The pope’s willingness to speak to the press is not new. A few months into his papacy, Francis established his willingness to speak candidly with journalists on a flight back to Rome from World Youth Day in Brazil when he famously replied “Who am I to judge” in response to a question about gay priests. A few months later, he gave he gave a wide-ranging interview, published by America and other Jesuit journals, that defined his papacy as one marked by openness to dialogue about difficult topics. More recently, through a robust media campaign that included at least three high-profile interviews in recent weeks, Francis seeks to show he remains in command. He spoke to the Argentine news agency Télam in an interview published July 1, to Reuters in a series of pieces that began running on July 4 and finally to TelevisaUnivision’s streaming service ViX on July 12.

Recent high-profile interviews not only gave journalists opportunities to question the pope during a time of international upheaval but allowed the Vatican to show that Francis is still in charge.

In those interviews, the pope commented on everything from his attempts to reform the Vatican to turmoil in Europe to abortion politics in the United States—and responded directly to questions about his health and ability to lead.

Francis denied rumors that he was planning to resign next month, a development some said was possible given his planned Aug. 28 visit to L’Aquila, the Italian city that is the burial place of St. Celestine V, who abdicated the papacy in the 13th century, which will be followed by a meeting of cardinals. When asked by Philip Pulella of Reuters if the visit and the meeting indicated his imminent resignation, the pope responded: “For the moment no, really. But when the time comes that I see that I can’t do it [run the church, because of bad health] I will do it [resign].”

The pope called rumors that cancer had been found during a surgery to remove part of his left colon “court gossip,” but said he would consider stepping down when he felt he could no longer perform the functions of his job.

The papal interviews do not always break new ground, but for Francis to speak so candidly about his health is a change for an institution that does not always acknowledge reality about the vitality of its leader.

For Francis to speak so candidly about his health is a change for an institution that does not always acknowledge reality about the vitality of its leader.

His comments urging bishops to act as pastors and not politicians in the case of Catholic leaders who support abortion rights, in the wake of the U.S. Supreme Court overturning Roe vs. Wade, for example, are consistent with previous statements. But the very fact that he regularly engages the press is the point. The interviews demonstrate that he is in control and has his finger on the pulse on issues affecting the world and the church. That kind of engagement is not necessarily a given for church leaders, where it is sometimes difficult to get cardinals and other bishops to weigh in on news.

Here in the United States, President Joseph Biden has also been dogged by claims that he is too old to lead since he launched his presidential campaign in 2019. This week, the president’s health was again in the spotlight, when the White House announced that he had tested positive for Covid-19, though he is experiencing mild symptoms. Other Democrats, though expressing support publicly for Mr. Biden, appear ready to run for the 2024 Democratic nomination should he change his mind and not stand for reelection.

Like the pope, the president faces ideological adversaries who try to exaggerate and amplify perceived physical and cognitive declines. Writing in The Atlantic, Yair Rosenberg highlighted how Republican operatives circulated a deceptively edited video last week that purports to show the president in a state of confusion during his recent visit to Israel, asking “What am I doing now?” The real context was more mundane, with Mr. Biden asking where he was to stand during a photo op on a tarmac.

Like the pope, the president faces ideological adversaries who try to exaggerate and amplify perceived physical and cognitive declines.

Mr. Biden has written for the opinion pages of major newspapers and delivered primetime addresses, and occasionally answers questions shouted at him by journalists. But he does not engage the press as formally or as robustly as the pope. At this point in his presidency, Mr. Biden has granted fewer interviews than his modern predecessors and held fewer press conferences. Reducing the number of unscripted interactions Mr. Biden has with the media lessens the chance he goes off script, but some analysts argue that it also sends a signal that he is not up to the job.

Still, there are similarities between the two.

Supporters of the president argue that their respective bosses are up to the tasks at hand, trying to fend off suggestions that Mr. Biden may not seek reelection in 2024. They point to his successes in passing a massive economic stimulus, increased infrastructure spending and new gun safety laws.

Mike Donilon, a senior advisor to Mr. Biden, told The New York Times, “On the way back from long trips when the staff is wiped out, he’ll want to spend four hours planning for how we hit the ground running on domestic policy, when all much younger staff want to do is sleep.”

Francis, too, faces an organized opposition, fueled partly by well-funded media operations, based in the United States with a global reach, that regularly call attention the pope’s health.

As for the pope’s advisers, Cardinal Kevin Farrell, the Irish-born American who leads the Vatican’s Dicastery for the Laity, the Family and Life, said that reliance on a wheelchair doesn’t affect Francis’s ability to lead the church, pointing to the pope’s own words when he told Italian bishops, “The pope governs the church with the head, not with the legs.”

Both President Biden and Pope Francis had planned lives of retirement before being elected to the highest positions in their respective realms. It was inevitable that questions related to their age would arise, but the methods used to offer assurances that they remain able to carry out their duties have differed.

Last year, Mr. Biden visited Pope Francis in Rome. According to the Vatican, the two leaders discussed a range of shared interests, including the environment, responding to the fallout from Covid-19 and meeting the challenges facing migrants. The pair spent about 75 minutes in private conversation, a lengthy meeting by Vatican standards.

As for whether each leader can make progress on any of those priorities or others remains to be seen, but any success will likely come from being able to convince their constituents that they are up to the job and can stick around long enough to see their reforms through.