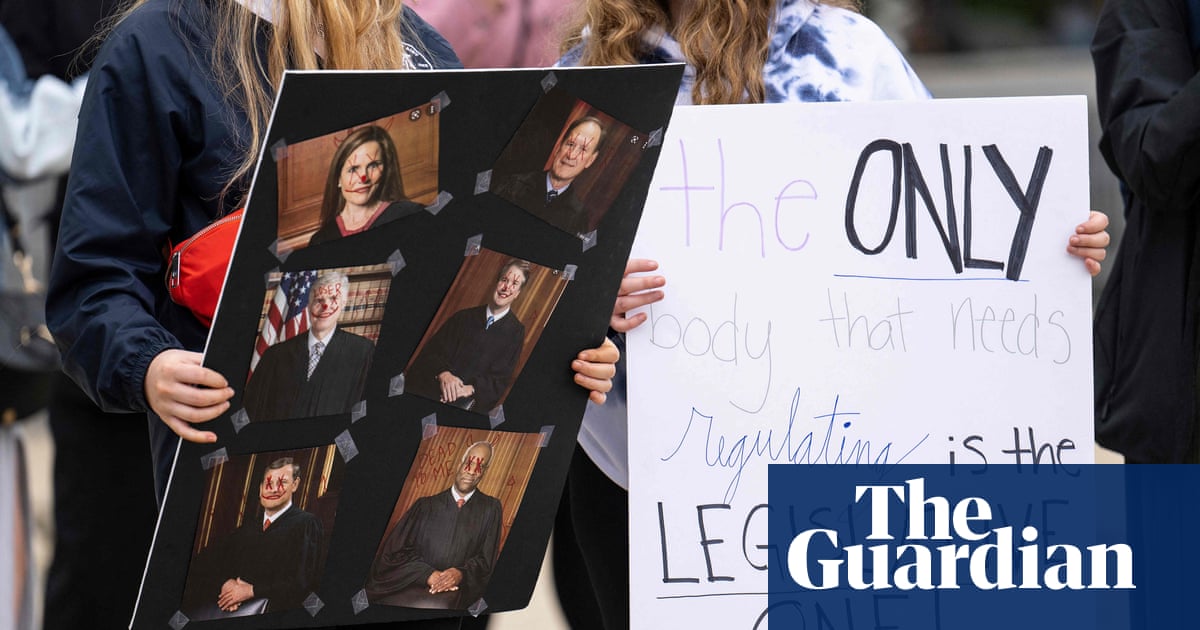 As the US waits to see whether the supreme court will follow through on its provisional decision to end the federal right to abortion, Democrats and Republicans are already preparing for how a reversal of Roe v Wade would affect the 2022 midterm elections.

Republicans have been heavily favored to retake control of the House and probably the Senate as well, but the court’s forthcoming final opinion in the crucial Mississippi case now before it, Dobbs v Jackson Women’s Health Organization, could alter those predictions.

Since the court’s draft opinion leaked on Monday night, vulnerable Democrats have made a point to portray themselves as champions of abortion rights.

“My opponent says that overturning Roe v Wade and ending protections for a woman’s right to choose is a ‘historic victory’,” Catherine Cortez Masto, a Democratic senator who is up for re-election in the swing state of Nevada, said on Tuesday. “I trust women and their doctors to make the healthcare decisions that are best for them – not politicians.”

Speaking to reporters on a Thursday press call, Jaime Harrison, chair of the Democratic National Committee, argued that abortion rights will become a critical issue in the November midterms if the 1973 landmark decision in the Roe case is overturned.

“The Republican attacks on abortion access, their attacks on birth control and women’s healthcare – these things have dramatically escalated the stakes of the 2022 election,” Harrison said. “In November, we must elect Democrats who will serve as the last lines of defense against the GOP’s assault on our established and fundamental freedoms.”

But Republicans have insisted that issues such as record-high inflation and Joe Biden’s handling of the US-Mexican border will weigh far more heavily on voters’ minds in November.

“Could be wrong, but I’d predict that all those issues that have 60% of Americans [feeling] we are on the wrong track (high inflation, rising crime, the border, etc.) will play a bigger role in the elections [than] a Supreme Court decision on Roe,” Republican strategist Doug Heye said on Twitter.

Rather than celebrating the news of Roe’s likely demise, Republican leaders have mostly tried to focus on the leak itself, saying it represents a break in court decorum and blaming the incident on Democrats. (It is not known who leaked the draft opinion.)

Asked about the court’s provisional decision on Tuesday, the Senate minority leader, Mitch McConnell, told reporters: “You need, it seems to me, a lecture to concentrate on what the news is today. Not a leaked draft, but the fact that the draft was leaked.”

Even the de facto leader of the Republican party, Donald Trump, has been hesitant to address the content of the court’s decision. The normally verbose former president has not yet released a statement about the draft opinion, although he has commented on the leak when asked by reporters.

“Nobody knows what exactly it represents, if that’s going to be it,” Trump told Politico on Wednesday. “I think the one thing that really is so horrible is the leaking … for the court and for the country.”

The former president also promised during his 2016 campaign to select supreme court nominees who would help reverse the landmark 1973 case.

Now Republicans stand on the precipice of achieving their decades-long goal, and many of them seem hesitant to declare victory. However, some Republican primary candidates are using the draft opinion to draw a contrast between themselves and their opponents.

“I’m calling on Brian Kemp to join me in calling for an immediate special session of the legislature to ban abortion in Georgia after Roe v Wade is overturned,” Perdue said on Thursday. “You are either going to fight for the sanctity of life or you’re not.”

Perdue and Kemp will face off in the Georgia gubernatorial primary later this month, providing an early test of how Republican voters feel about the looming end of Roe. But other Americans’ thoughts about the matter will not be fully known until November.

Meanwhile, new metal barriers went up in front of the marble steps and columns of the majestic supreme court building in Washington DC, close to the US Capitol, this week, a stark symbol of the sudden politicization of the court that has always preferred to keep itself above the partisan fray.

This came after fierce protests erupted there within minutes of the leak on Monday, with police separating protesters in rival camps the following day.

Now law enforcement officials in many places across the US are braced for potential civil unrest and women’s rights groups are planning massive protests in several cities for next weekend to demand the protection of the right to choose in reproductive healthcare.