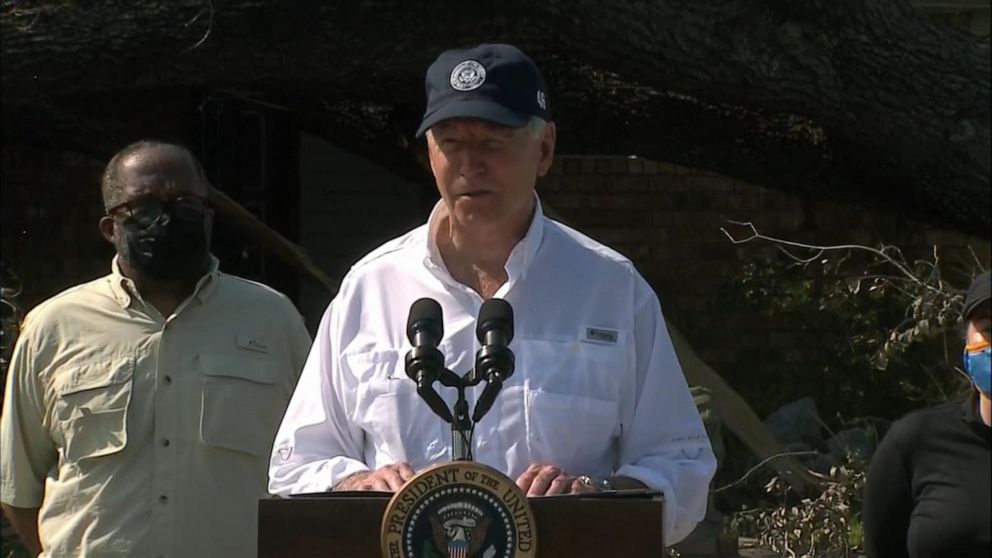 Power out, high voltage lines on the ground, weeks until electricity is restored in some places: The dismal state of power in Hurricane Ida’s wake is a distressingly familiar scenario for Entergy Corp., Louisiana’s largest electrical utility.

The power company has grappled with other widespread outages after Hurricanes Katrina, Rita, Gustav and Ike — not to mention Laura, Delta and Zeta — over the past decade and a half. Other Louisiana and Gulf Coast utilities have faced similar disasters, sometimes needing to rebuild entire networks. If anything, power restoration has gotten faster in recent decades.

Still, critics question the enormity of the outage from Hurricane Ida and why it is still so widespread nearly a week after the storm slammed into the state with 150 mph (241 kph) winds.

The concerns are most acute in the New Orleans area. All eight of the transmission lines that link a region of more than 900,000 people to power from the outside world failed during Ida — even though storm damage in the area was less severe than to the south and west. As of Friday, Entergy had restored three of the lines.

“For all eight to fail, I’m just wondering whether this could have been prevented and that’s what we’re going to be looking into,” New Orleans City Council Member Helena Moreno, who oversees energy regulation in the city, told WWL-TV.

While Entergy was heavily criticized for widespread failures and slow restoration after Hurricane Gustav in 2008, many are holding back from pointing fingers post-Ida. Gov. John Bel Edwards said Wednesday that “nobody” is satisfied with a weekslong restoration process. “But I am mindful that we just had the strongest hurricane, at least tied for the strongest, that the state has ever experienced.”

“We’ve been led to believe the transmission system was built for this level of wind, but it couldn’t have possibly been,” Burke said.

The isolation of metro New Orleans has always made power supply tricky, because there aren’t enough power plants inside the area to meet needs. But regulators are likely to ask why Entergy didn’t use a new $210 million plant in eastern New Orleans to restart electricity.

When it was lobbying the city to build the facility — a process during which the company hired actors to pose as plant supporters, prompting a $5 million fine — Entergy told officials the plant would have what’s called “black start” capability, the ability to power up a blacked-out grid.

The plant does have black start capability, but Entergy determined that a small disturbance could knock the plant offline and that it would be better to use it along with electricity from elsewhere for greater stability in balancing the power load, said Entergy Louisiana CEO Philip May.

“If we have the ability to pursue a path … that allows us to do this in a more controlled and more robust way, that’s going to be the path we pursue,” he said.

Entergy’s transmission troubles were underscored when a high voltage tower crumpled beside the Mississippi River in the New Orleans suburb of Avondale during Ida. The utility says it builds new transmission towers to withstand winds up to 150 mph, but the company has said its oldest towers were only designed to withstand 100 mph (160 kph) winds. It’s unclear how many older towers remain.

Asked that question, Entergy spokesman Jerry Nappi replied in an email that the company seeks to upgrade “priority structures” under yearly plans and bring up damaged towers to “more resilient standards” when repairing or replacing them.

Flying debris hitting lines is often a bigger problem than damage to towers, and the overall transmission system may have been knocked offline not by destroyed towers but as circuits tripped. May has said the Avondale tower recently passed an inspection and hadn’t been reinforced because it was already “robustly engineered.”

Regulators could force Entergy to further toughen its grid, lessening future risks from the more frequent and severe storms wrought by climate change. Florida, for example, now requires every privately owned utility to submit an annual plan for making the electrical system more resistant to outages.

But upgrades cost money — and money usually comes from customers.

“When you’re looking at something like storm hardening, the important thing to remember is that ultimately it is going to be the people that are paying all of these costs,” said Ted Kury, director of energy studies at the University of Florida’s Public Utility Research Center.

Customers will be paying for 2008 hurricanes Gustav and Ike through next summer; and Isaac, which hit in 2012, through 2026. Entergy wants another $2 billion to cover costs from Laura, Delta and Zeta last year. Repairing Ida’s damage will cost still more.

With customers paying for old damage, it’s hard to focus on investing for the future, Burke said.

“It sucks up all the time and energy and capacity as costs start hitting bills,” he said.

Some upgrade ideas have been rejected as too expensive or technically impractical. While Louisiana encourages burying local distribution lines in new developments, studies have suggested that burying high voltage transmission lines could cost billions. There are also questions about feasibility, Kury said, because underground transmission lines can overheat and be damaged by water.

David Dismukes executive director of the Center for Energy Studies at Louisiana State University, said he would “caution people that redundancy comes with a big cost, and usually when you start working and penciling the numbers out, the economics usually don’t work out on this kind of thing.”