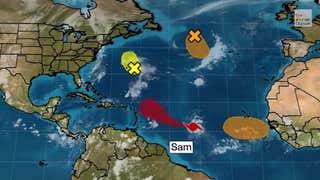 Hurricane Sam is rapidly intensifying in the eastern Atlantic Ocean and will soon become a major hurricane. However, it’s uncertain whether it will strike the Leeward Islands next week.

This upgrade from the National Hurricane Center was based on infrared satellite imagery showing a compact inner core of thunderstorms and microwave satellite imagery taken just before midnight Eastern Time showing an incipient eye.

Sam is still over 1,400 miles east-southeast of the northern Leeward Islands moving west.

An Uncertain Future For Leeward Islands

Despite Sam’s rapid intensification, it’s not yet clear if Sam will ever threaten land, but it will slow down.

Sam’s forward speed will slow this weekend, as high pressure to its north acting as its initial steering wheel weakens.

According to the latest computer forecast models, Sam may not reach the longitude of the Leeward Islands until next Wednesday or Thursday.

Whether it passes over parts of the islands or bypasses them to the north is still unclear, at this time.

Enjoy The Outdoors With This Portable Outdoor Fan (SPONSORED)

Residents in the Leeward Islands should monitor the latest forecast for any possible changes.

Beyond that, the large majority of computer model forecasts eventually curl Sam away from the U.S. East Coast late next week or next weekend.

That’s because they’re forecasting a weaker, less expansive Bermuda high over the Atlantic Ocean and a stronger trough, or southward plunge of the jet stream, near the East Coast, as described in a previous article here.

That pattern would cause Sam to curl north, then northeastward into the central or western Atlantic Ocean, rather than simply plowing westward.

However, it’s far too soon to completely rule out Sam as a potential U.S. threat.

That’s because the long-term steering forecast for Sam could change in future computer model forecast updates.

Sam could at least generate high surf and rip currents along the East Coast more than a week from now even if it stays well offshore, as Hurricane Larry did earlier this month despite passing east of Bermuda.

Sam On the Way to Becoming an Intense Hurricane

Sam is in an environment conducive for intensification into at least this weekend, including low wind shear and increasingly warm water.

In this environment, Sam is expected to become a formidably strong hurricane, at least Category 3, by Saturday.

Beyond that, Sam’s environment may become a tad less cooperative

Fluctuations in intensity due to replacement of Sam’s eyewall can be expected beyond this weekend, but Sam is still expected to remain a formidably strong hurricane well into next week.

Sam is a small hurricane with both its tropical storm-force and hurricane-force winds covering a small area relative to other hurricanes.

Rapid intensification – defined as an increase in maximum winds of at least 35 mph in 24 hours or less – is common in small hurricanes like Sam.

(MORE: Why Some Hurricanes Rapidly Intensify While Others Don’t)

Check back with us at weather.com for the latest forecast updates on Sam.