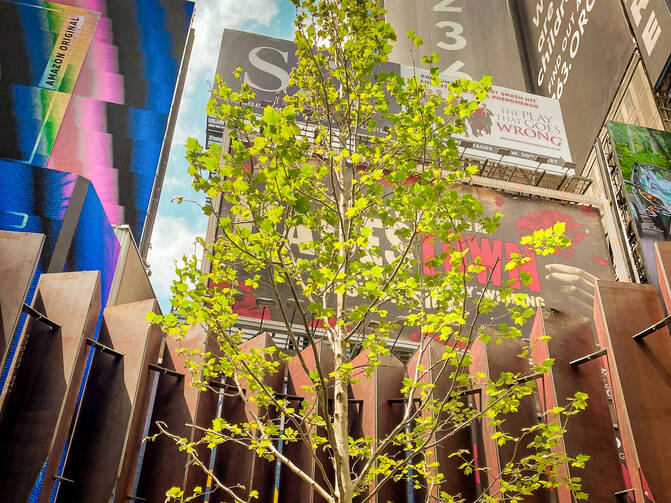 For visitors to New York City, Times Square is a prime destination, maybe even the first thing on their bucket list. There is just nothing like wandering amid so many people and so many massive advertisements to make you feel like you are really a part of things here, like you are the hero of the story. You have arrived.

But for people who live in New York City, Times Square is a nightmare place, a hellish whirlpool of bodies, noise and capitalism. It’s like a cellular signal dead zone but for hope. We go there only when we have to, flee as fast as we are able, and tell stories afterward of the horrible things we encountered in between.

Over the weekend, I had to undertake such a journey. But I was surprised to discover something new and not awful: a 20-foot-high open-air, circular pavilion with simple wooden seats on the inside where people can stop and rest.

For people who live in New York City, Times Square is a nightmare place, a hellish whirlpool of bodies, noise and capitalism. It’s like a cellular signal dead zone but for hope.

This is “FILTER,” a temporary installation designed by CLB Architects as a part of New York City’s Design Week festivities. The company describes it as offering an “urban ‘pause’” in its promotional material. “FILTER,” it goes on to say, “carves out space for quiet recentering within the frenetic energy of Times Square.”

Inside the pavilion, an old woman with brilliant purple hair was resting against her walker; a husband and wife who were almost certainly tourists—the hats from the Grand Canyon are a dead giveaway—ate their lunch; an employee on break from one of the nearby shops sipped a Dunkin’ coffee and checks his phone. And sitting down I was stunned to find that even though the intermittent steel beams, which gave the pavilion its structure, definitely let in the noises, scents and visual stimuli of the city—everything really did seem quieter in there, peaceful.

In part, I think it was the tree that sat in its center. Like a candle in a church, it gave the space a kind of focus and character of its own. And the tree was quite simple: no soaring redwood but a young, still-fragile thing with tiny budding leaves. Its vulnerability within the sharp-elbowed aggressiveness of the surrounding world was so relatable and compelling.

But the structure also put the world around us into a different perspective. Above us hung a massive ad for the musical “Hadestown.” Behind me a group of teenagers shrieked “We did it!” as they took their Times Square photo. But being in that structure took the edge off of all of it. Somehow just the act of creating a little space of its own gave us who were within the pavillion the distance to be able to contemplate the world around us without being overwhelmed by it. It was like we had unexpectedly stepped into an undersea diving bell; we sat and watched all the sounds and scents and colors, and even delighted in them.

Sitting in front of a little tree amidst the never-ending clown car that is Times Square hardly seems like a religious act. And yet there is unexpected solace here.

The longer I sat there, the more I found the space was giving me perspective on my own life, too. It reminded me of what I hope for from church—room to breathe that gives us a chance to connect with God and ourselves; a place that will welcome us and enable us to more deeply appreciate our lives and respond.

But I also found myself deeply relieved that this wasn’t actually a church and felt surprised by that, too. Who hasn’t felt the comfort of time spent in an empty church, the restful peace that can descend upon us there in that quiet space?

And yet it’s just so hard to know what to expect when you enter a church these days. Constantly worrying that a partisan screed dressed up as a homily makes it hard to be present and open at what might be a perfectly good liturgy. But even outside of Mass times, statements from church leaders on things like Black Lives Matter or local politicians erode some of the spiritual tissue of our faith. Churches start to feel less like places where anyone can go in at any time of day and connect with God, and more like political arenas in which you are only really welcome and safe if you agree.

Sitting in front of a little tree amidst the never-ending clown car that is Times Square hardly seems like a religious act. And yet there is unexpected solace here. And God seems all around us.