I’m a priest who never had a devotion to the rosary. So I decided to dig into its meaning. 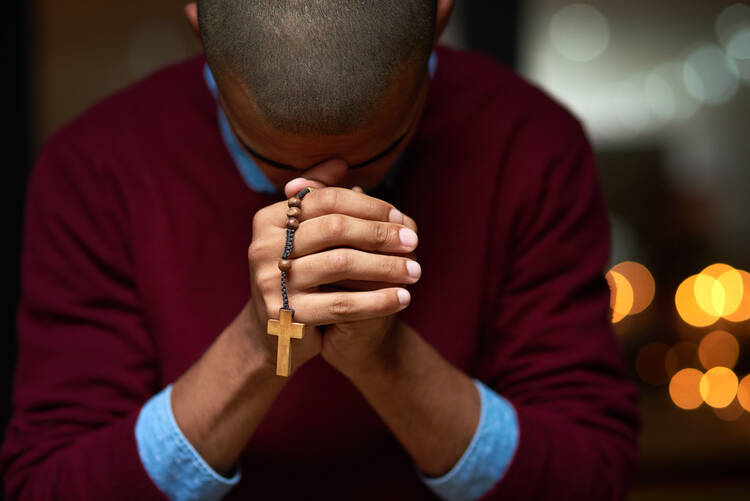 One of the crazy aspects of being a priest is that people expect you to know all the things. “Is that a venial or a mortal sin?” (Shoot, are we still doing that?) “Who was Gregory the Great?” (Um, Marcia and Jan’s older brother?) As a priest you have to learn once again that “I don’t know” is always an O.K. answer, as is “May I introduce you to my friend the internet?” But there are some things you end up realizing you probably should know.

Like, the rosary. What’s the deal with that? I’m asking seriously. It was never a common practice in my family when I was growing up. I never really engaged with it until after I became a priest, when, either just before or after daily Mass, I would find this little clutch of people sitting in the church praying quietly while the sound of little beads clicking echoed throughout the space.

I could understand the potential draw of the beads themselves, like a little trace of the holy that we could keep with us, hold onto when things got hard. But the mumbled rote prayers, often spoken at high velocity? I just didn’t get the attraction. (I realize that this is probably the most stereotypical American Jesuit thing that I could possibly write.)

But I really have been curious: Where did this practice come from, and why is it such an important part of so many Catholics’ spiritual lives?

And so, in honor of this month of the rosary, I did a little digging.

What is the rosary?

The rosary is a set of beads, usually (but not always) 59 of them on a circle of string with a crucifix hanging at the end. And each bead plus the cross itself represents a prayer to be said. The term comes from the Latin word rosarius, which means “garland.” As the author Regis J. Flaherty puts it, a rosary is basically “a bouquet of prayers offered to God.” Which is a pretty lovely sentiment.

As the author Regis J. Flaherty puts it, a rosary is basically “a bouquet of prayers offered to God.”

Do all rosaries look the same?

There are lots of variations in the rosary—different prayers that some people add to make things a little more interesting, and even different kinds of rosaries. There are single-decade rings with little protruding beads that you can wear on your finger. There are Franciscan rosaries that have seven decades and involve praying not on the life of Jesus but on the seven joys of Mary. There are also lots of different designs, from a beautiful colored-stoneRosary of Modern Sorrows created by refugees from the Congo (and sold by Contemplative Rebellion, one of America’s advertisers), to the Green Bay Packers rosary the first parish I served as a priest gave me. (Each bead was a green football—which for a kid from Chicago is basically like pouring holy water on a vampire. Not cool, you guys. Not cool.)

Where did the rosary come from?

There are at least two answers to this question. Let’s start with the anthropological one. As far back as the third or fourth century there were Christian hermits living in the desert who used knotted ropes to help them pray. According to the Sayings of the Fathers, an angel taught St. Anthony to pray in this way when he felt afflicted by evil spirits. At first, the standard prayer they used is thought to have been the Jesus Prayer (“Lord Jesus Christ, Son of God, have mercy on me, a sinner.”); but there is also evidence that some used the ropes to help them pray through all 150 Psalms every day. (Yep, you read that right. And on top of that they did it from memory.)

As far back as the third or fourth century there were Christian hermits living in the desert who used knotted ropes to help them pray.

At some point lay people started imitating this practice, as you do when you admire someone holy. The problem was, most of them could not read, so reading the psalms was not an option. Instead they would pray 150 Our Fathers, which is a lot. Hence the continued need for a cord with knots in it to keep track.

Over the centuries, offering prayers invoking Mary became a more and more popular form of spiritual expression. In the 12th century St. Albert is said to have recited 150 Hail Marys every day. He also really got his body into it, doing 100 of them while genuflecting and 50 while lying on the ground.

In the 13th century three English anchoresses walled themselves up in a cell to live a life of complete solitude and prayer. Their rule, or guide for life, simplified the 150 Hail Marys down to our current practice of 50 Hail Marys broken into sets of 10. Two hundred years later, the Carthusian Monk Dominic of Prussia would add the idea of meditating on the life of Jesus during these prayers, with a quotation from Scripture at the start of each decade.

One answer as to where the rosary came from is none other than Jesus’ mom, the Virgin Mary. Tradition says she gave to St. Dominic in a vision in 1208.

The other answer as to where the rosary came from is none other than Jesus’ mom, the Virgin Mary. Tradition says she gave to St. Dominic in a vision in 1208. As described by the Dominican Sisters of Springfield, Ill., Dominic was wandering in a wood in Toulouse, France, praying about the challenges he was facing dealing with “heretical sects” (a notion we will come back to). And after three days of prayer and fasting, he had a vision of angels alongside a ball of fire, after which he heard Mary tell him to pray “her psalter.” And so he began to pray it and also preach it in France. (Here’s the spot where St. Dominic is said to have had his vision. It’s really pretty!)

This was not a story widely known at the time, though. In fact it was not until 1475 that it was noted in the documents of the Order of Preachers (the Dominicans), when another Dominican, Blessed Alanus de Rupe, also known as Alan de la Roche, started telling everyone about it, including how Mary had made 15 promises to those who prayed the rosary, all of which can be summarized as “the Catholic good stuff,” i.e. grace, protection from sin and eternal life. This motivated people in many countries to begin the practice of saying the rosary.

Why is it prayed together?

In fact, many people say the rosary privately, by themselves. But from its early days with the Dominicans the practice also has been prayed as a group activity, with one person leading the prayer—which is to say, announcing the mysteries and saying the first line of each prayer alone, after which the whole group joins in. St. Alanus developed “confraternities of the rosary,” groups of lay people who would agree to pray the rosary as a regular part of their spiritual practice.

In part, the practice of praying the rosary in public as a group was done to promote the practice itself. Seeing other Catholics saying the rosary encouraged more people to do it. This was understood as being to their benefit, a means of improving their lives and faithfulness as Christians. A modern-day commentary on the practice talks about the rosary as teaching people virtue, by way of the lives of Jesus and Mary, and “inflame[ing] us with the holy love of God, by bringing to our view the many advances our dear Lord has made in order to gain our hearts.”

[Related: Our Lady of Manhattan: What I learned praying the rosary while biking around New York City]

But it seems as though the practice of praying in common was also considered its own specific form of blessing. Pope Leo XIII described the practice as gathering “a great number of men”—he was writing in the 19th century, with all its assumptions and linguistic issues—“united through fraternal charity, to praise and to pray to the Blessed Virgin Mary, and to obtain her protection through praying with one accord.” In praying aloud together we experience that communion with each other and with God that we believe the church offers us, and also perhaps are fortified in our individual vocations and desire to do good for others.

There is one other, more unusual element to the group experience. Believe it or not, at various times in its history, the rosary has been used by groups as a military strategy. In some ways you can see the seeds of that in the origin of the practice itself. St. Dominic was looking for a tool to overcome the heresy of Albigensianism (basically, the idea that the world is evil and run by a second god known by the very mustache-twirling monicker of the Demiurge), and Mary gave him the rosary.

But 100 years later, when the navy of the Ottoman Empire was poised to take control of the entire Mediterranean Sea, Pope Pius V—who was himself a Dominican friar and said the rosary every day—asked believers to pray the rosary so that the Catholic states of southern Europe could overcome the odds and beat back the invasion. The feast of Our Lady of the Holy Rosary on Oct. 7 commemorates the Catholics’ win at that battle in 1571. Supposedly the sound of soldiers praying this strange rhythmic prayer through the night also freaked out the Turks.

Over the centuries since there have been other occasions when Catholics faced with danger or threat have turned to the rosary—before military battles, at the prospect of Communist rule. Jesuits working in Hiroshima prayed it after the atomic bomb was dropped there and according to one of them, none of them ever experienced any radiation poisoning.

Today I often hear about families doing the rosary together. It is a way of teaching their children the faith and also experiencing a relationship with God together, as a family. For some, the rosary can sometimes offer a more tangible sense of communion than the standard liturgy, insofar as it is more participatory.

It may seem strange to some to keep saying the same prayers aloud over and over, but it can also be like singing the songs popularized by the Community of Taizé. Somehow the repetition allows your spirit to let go and wander into a space of peace and contemplation. The prescribed form can alleviate the pressure we sometimes feel to say the supposed right thing in prayer and help us to focus on feeling close to God, and maybe find a little comfort in the sound of little clicking beads echoing around us.