In Canada, a pro-abortion, pro-LGBT Conservative is seeking to unseat Justin Trudeau 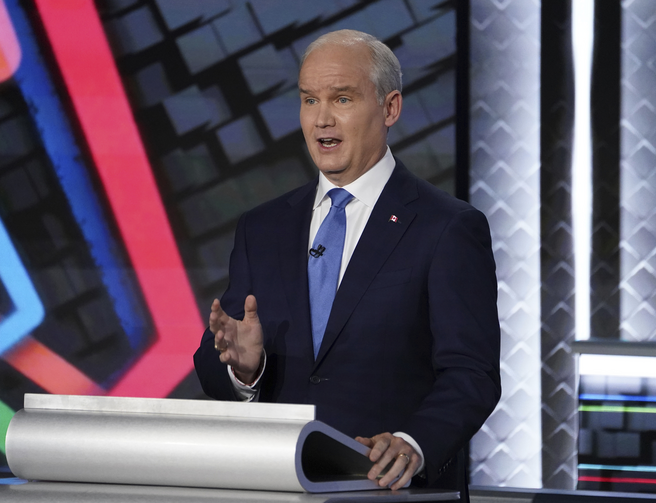 TORONTO (AP) — The man who could oust Prime Minister Justin Trudeau from power advertised himself a year ago as a “true-blue conservative.” He became Conservative Party leader with a pledge to “take back Canada” – and almost immediately started working to modernize the party by pushing it toward the political center.

Erin O’Toole, a military veteran and a member of Parliament for nine years, has only quickened his pace while campaigning for Canada’s snap federal election. Despite criticism that the former lawyer would say and do anything to get elected, polls show O’Toole’s Conservatives could defeat Trudeau’s Liberal Party on Monday.

O’Toole’s strategy, which has included disavowing positions held dear by his party’s base on issues such as climate change, guns and balanced budgets, is designed to appeal to a broader cross-section of voters in a country that tends to be far more liberal than its southern neighbor. Whether moderate Canadians believe O’Toole is the progressive conservative he claims and whether it has alienated conservatives have become central questions of the election campaign.

“He has distanced himself from being a Conservative,“ said Jenni Byrne, who served as campaign manager and deputy chief of staff to former Conservative Prime Minister Stephen Harper. “Not just from the Harper years but from his leadership campaign less than two years ago.”

Byrne calls it a gamble and a mistake and said she has been talking to Conservatives across the country.

“There seems to be a lack of enthusiasm everywhere,” Byrne said.

Whether moderate Canadians believe O’Toole is the progressive conservative he claims and whether it has alienated conservatives have become central questions of the election campaign.

John Baird, a former Conservative foreign minister, said he didn’t want to opine on whether he thinks O’Toole is taking the party in the right direction. But Baird said O’Toole is the opposite of Trudeau, who has made the cover of Rolling Stone and been featured in Vogue magazine.

“He’s not the sizzle, he’s the steak,” Baird said of the Conservative Party chief.

A Conservative win would represent a rebuke of Trudeau, 49, who called the election despite the pandemic in hopes of shoring up his minority government but now is at risk of losing office to the head of the opposition, a politician with a fraction of the name recognition.

“O’Toole tells Conservative friends what he’s really going to do and pretending to Canadians something completely different,” Trudeau said during a campaign stop in Montreal on Thursday. “Whether it’s been on guns, on the environment or whether it’s been on vaccines, Mr. O’Toole has been misleading Canadians, not leading.”

O’Toole calls himself a Conservative leader with a new style and says he rejects the politics of celebrity and division. He describes his views as pro-abortion rights and pro-LGBTQ rights. He told the crowd at a Quebec campaign event: “You’ve been let down by all parties of all stripes, mine included, at times.”

“From the first day of my leadership, my priority has been to a build a Conservative movement where every Canadian can feel at home: inclusive, diverse, forward-looking, progressive, worker-friendly,” O’Toole said Wednesday. “We’re not your dad’s Conservative Party anymore.”

That’s dramatically different language from what O’Toole used during his bid to become Conservative Party leader last year. O’Toole won the post with the support of social conservatives and gun enthusiasts, and by disparaging a centrist opponent’s Conservative credentials.

O’Toole calls himself a Conservative leader with a new style and says he rejects the politics of celebrity and division.

Since then, many of his actions more closely resemble those of the leadership candidate he beat than of a right-wing standard-bearer.

For example, he reversed the party’s position on guns at the beginning of the month, contradicting the Conservative platform he put out in August by pledging to maintain Trudeau’s list of prohibited firearms. O’Toole also now favors a carbon tax to fight climate change, a policy of Trudeau’s which his party vehemently opposed for years and O’Toole had promised to overturn.

He also tempered his support for allowing health care workers to exercise so-called “conscience rights” by refusing to participate in abortions, assisted suicide or other procedures on moral or religious grounds.

Robert Bothwell, a professor of Canadian history and international relations at the University of Toronto, said an O’Toole victory would give moderate Republicans in the United States evidence to argue that a more centrist, big tent party can win elections.

“This is an indication that if you run to the center, which the Republicans always used to do, it works,” Bothwell said. “If I were a moderate conservative, I’d be pleased, and I would point to it as much as I could.”

Ian Brodie, a University of Calgary professor who served as chief of staff to former Conservative Prime Minister Stephen Harper, said he thinks hatred of Trudeau will prevent the most conservative voters from abandoning O’Toole on Monday.

Brodie said many Conservatives in Western Canada think Trudeau, who has talked about a day when oil is not needed, has a condescending view of the oil industry that is central to Alberta’s economic vitality.

“I can’t overstate how much people want to get rid of Trudeau here, so it’s all hands on deck,” he said.

“This is an indication that if you run to the center, which the Republicans always used to do, it works,” Bothwell said.

Political observers have been quick to note O’Toole’s new stripes. Robyn Urback, a columnist for the Globe and Mail, Canada’s national newspaper, wrote, “If there are still those who don’t like Mr. O’Toole’s position on something, well, all they have to do is wait a few minutes.”

University of Toronto political science professor Nelson Wiseman described O’Toole as “two faced” but said the party leader’s policy reversals do not seem to have registered with voters even though “everyone is calling him out on it.”

But Wiseman thinks that O’Toole not requiring Conservative candidates to get vaccinated against the coronavirus and refusing to say how many of them are not could cost him Monday, especially after a provincial Conservative government in Alberta apologized this week for mishandling the pandemic.

“The Conservative position on vaccinations is hurting the party and O’Toole because growing numbers of the vaccinated are becoming increasingly upset with those who refuse to get vaccinated,” the political scientist said.

Like Trudeau, the son of the late Prime Minister Pierre Trudeau, O’Toole was born in Montreal and is the son of a longtime politician. His father served as a Conservative member of Ontario’s provincial legislature for almost 20 years.

O’Toole’s mother died of breast cancer when he was 9. After his father remarried, he grew up the oldest in a blended family with five children. Influenced by his father’s public service, he entered the military at 18 and went on to attend the Royal Military College of Canada.

One of his professors there, Lubomyr Luciuk, said O’Toole impressed him.

“Was he my most intelligent student? No,” Luciuk said. “But he was one who asked good questions and listened and learned. He wasn’t afraid to put himself forward and say, ‘What should I read about this?’”

After graduating in 1995, O’Toole was commissioned as a Canadian Air Force officer. He flew on a Sea King helicopter as a navigator for naval search and rescues, and eventually left military service for law school.

After earning his degree, O’Toole worked on Canada’s version of Wall Street in Toronto. He first was elected to Parliament in 2012, representing a suburban district outside Toronto, and three years later joined Harper’s Cabinet as minister of veteran affairs.

He lost a bid to become party leader in 2017 but won last year with help from the ranked-choice voting system the Conservative Party uses. Longtime friends say the married father of two is neither an ideologue nor a Trump-style populist.

Luciuk said he thinks his former student’s lack of celebrity appeals to Canadians after more than five years of Trudeau’s leadership.

“He’s not debonair. You don’t say, ‘Oh wow, what a handsome man.’ He’s not,” the professor said. “I see a pretty ordinary guy, but most of us are. He’s resonating with people because he’s got common sense, he’s pragmatic. He’s not doctrinaire. He’s not beholden to some of the wingnuts, frankly, who are in the Conservative Party.”