In hard-fought race, Boston’s mayoral field is cut down to Wu and Essaibi George – The Boston Globe 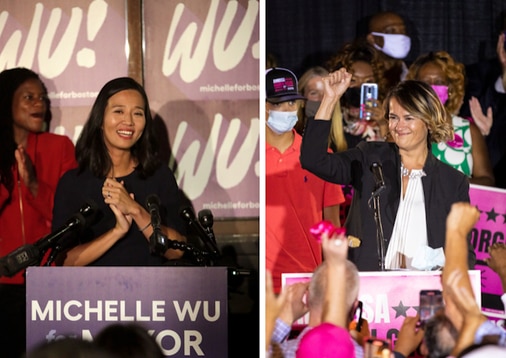 But Wu, the front-runner in polls, expressed confidence to her supporters just after 10 p.m., even as the city election site showed nothing but zeroes. She said she was sure she had claimed one of the top two spots to move on to the final. The individual campaigns had gathered and tallied voting numbers from each precinct before the city had released them, and said their tallies showed that Wu’s victory was inevitable.

“I am humbled by your support, I am inspired by your leadership,” Wu said to her volunteers, many of whom have spent weeks knocking on doors and were at polling locations all day on Tuesday.

“While the votes are still to be counted tonight . . . we already know what the choice is for the city of Boston — this is about a choice for our future,” she said. “This is a choice about whether City Hall tackles our biggest problems with bold solutions, or we nibble around the edges of the status quo.”

She added, as the crowd erupted in cheers, “Boston is in a moment of incredible opportunity, and it’s on our shoulders right now [to] meet that moment.”

Across the city in Dorchester, Essaibi George danced on stage with friends and supporters at the Venezia restaurant, and told the crowd just after 11:30 p.m. that she was assured she had made it into the final.

Essaibi George was less declarative than Wu, but still confident, thanking her mother for support and declaring “her daughter will be mayor.”

“It’s super important we take the time necessary to count every vote,” she said in what sounded like a victory speech. “It doesn’t mean we don’t celebrate, but we make sure that every vote is counted.”

The crowd was raucous, breaking out in occasional chants of “Annissa!”

She also seemed to take early shots at Wu for having what she framed as pie-in-the-sky ideas.

“You will not find me on a soapbox … you will find me in your neighborhood, doing the work,” she said, adding, “Boldness is about getting it done. Instead of just advocating and participating in academic exercises.”

John Barros, the city’s former chief of economic development, came in last among the major candidates, according to the campaign tallies.

“This campaign was never about a job. We proposed a bold future for Boston with transformational changes. This is work I’ve been doing my whole life, and I look forward to continuing this work for the people in my community and throughout Boston — in partnership with our community,” Barros said in a statement.

Despite the failure of the city to produce any results well past midnight, two women of color will square off in the Nov. 2 general election for the first time in Boston’s 200-year history of electing mayors, a sea change for a city that has served as a bastion of white male political power, and that is still recovering from the wounds of its racial past.

And yet the results also dealt a heartbreaking blow to Boston’s Black communities, who had looked to Campbell and Janey as their best chance since 1983 at seeing a Black person elected mayor. That’s the year when Mel King galvanized blue-collar communities to become the first Black man to make it to a final, following decades of racial strife in the city. He ultimately lost to Raymond Flynn.

Janey, who never appeared at her own party, issued a statement just after midnight. “While we are still waiting on some results, it appears that we have come up short in the election,” Janey said, offering congratulations to Wu and Essaibi George. She expressed pride in what she had accomplished in her time as acting mayor.

“At City Hall — as the first woman and first Black mayor of Boston — we not only made history, but we made a difference,” she said.

Wu, a 36-year-old mother of two from Roslindale, is Asian American, the daughter of immigrant parents from Taiwan. Essaibi George, 47, is a mother of four from Dorchester, and her father was a Tunisian Arab Muslim, her mother of Polish descent.

Tuesday saw disappointing turnout levels, with only about 100,000 voters, or roughly 25 percent of the electorate casting a ballot. The low level of interest in the race likely helped Essaibi George, who had built a solid base among voters who are most likely to cast a ballot in a preliminary election, according to a recent poll conducted by research group MassInc. Preliminary municipal election turnouts are typically lower than other races and attract only the most consistent voters.

Those conditions did little to help Janey and Campbell, who had been in a fierce competition for second place with Essaibi George leading to Tuesday, and were dependent on a high voter turnout, according to the recent poll. Wu had commanded the lead in that poll and other recent surveys.

The voting results were below the 31 percent turnout the city saw in the last preliminary election for mayor, in 2013. In that race, Martin J. Walsh — an ally and close friend of Essaibi George, who grew up in the same Dorchester neighborhood — bested a crowded diverse field of candidates to advance to the final election. He ultimately won.

Essaibi George had inherited many of Walsh’s supporters; she escorted his mother to the polls on Thursday.

What comes now is an ultimate, historic showdown between Wu, a flag bearer of the politically progressive movement that has taken hold in Boston and reshaped its ideological identity, and Essaibi George, who has taken a more conservative lane to focus on quality of life issues, such as public safety and improving schools.

An aide for Essaibi George told the Globe that the campaign was already preparing for a final between the two candidates, and would define Wu as a big picture progressive whose focus on topics such as the environment and transportation were unrealistic and unrelated to the day-to-day duties as mayor.

Essaibi George had laid a groundwork of putting social workers in schools and focusing on education and public safety.

But Wu has ridden the very progressive moment that has led to an ideological shift in Boston, as voters identify as more liberal and progressive, according to recent polls. A city councilor since 2014, and the first woman of color elected council president, she has also built a platform of addressing housing inequities, and addressing racial and economic disparities.

She’s also popular among newer and younger voters, in a city that has seen its population grow by over 60,000 people over the last decade, according to a recent Globe poll.

The poll of 500 likely voters shows that what they care about most is education (20 percent), followed by housing (19 percent), racism and equity (17 percent) and the economy and jobs (14 percent).

The matchup could also frame a city of shifting ideologies, pitting Boston’s traditional voting strongholds in West Roxbury, Dorchester, and South Boston, where Essaibi George’s support is strong, against new areas where residents have sought to set the city’s agenda, in Jamaica Plain and Roslindale, where Wu has dominated.

Essaibi George has strong support among public safety groups, and a superPAC that was recently formed on her behalf has already spent a half-million dollars supporting her campaign. SuperPACs are independent entities that can spend unlimited amounts on behalf of a candidate so long as they don’t coordinate with the campaign. The pro-Essaibi George superPAC was organized by former police commissioner William Gross, and it has received donations from police unions and Jim Davis, the New Balance chairman who also donated heavily to former president Donald Trump.

Essaibi George has sought to distance herself from the superPAC.

The support was palpable for both candidates Tuesday, as they set out supporters in get-out-the-vote drives. Wu’s team sent a large truck with a screen fixed to the side playing a video of Senator Elizabeth Warren, who endorsed the Wu campaign, urging residents to vote.

At the Jackson Mann school in Allston, 23-year-old Zach Sheola said his vote was for Wu.

“I like her climate plans . . . and her plans for transit,” said Sheola, who’s pursuing a master’s in social work at Boston College. “Plus, she’s the best candidate on housing.”

He added, “I care a lot about progressive and leftist politics. So I’m looking for candidates that genuinely care about the well-being of Bostonians.”

She added, “I think she’ll take care of everybody’s interests.”

Earlier in the day, Nicki Kobacker reflected on the moment of history, as she cast her ballot at the Condon Community Center in South Boston and expressed optimism that the city would see a shift from the nepotism and good-ol’-boy network that have long permeated the city’s political scene.

“This is really exciting for Boston,” she said. “For how many years, it’s been, ‘Is it the Irish guy or the Italian guy’ . . . You feel like Boston’s joining the rest of the world.”