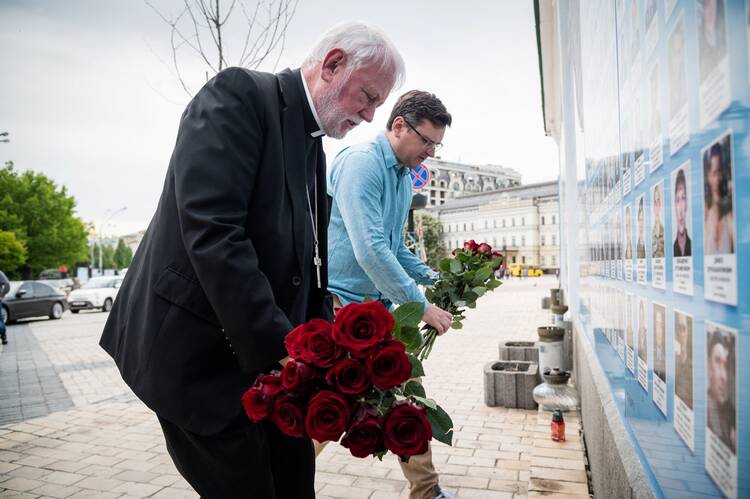 Archbishop Paul Gallagher has been the Vatican’s secretary for relations with states for the past seven and a half years. On July 11, he granted a wide-ranging interview to America’s Vatican correspondent, Gerard O’Connell, in which he spoke about the geopolitical situation in the world, the war in Ukraine and relations between Russia and the Vatican.

He also discussed the Holy See’s provisional accord with China on the nomination of bishops, Cardinal Joseph Zen’s arrest, the Vatican’s concern about the situation in the Holy Land, the relations between the Holy See and the United States, the Holy See’s accession to the U.N. convention on climate change, the pope’s visit to Canada and possible papal visits to other countries. He concluded by describing developments he would like to see in the world over the next two to three years.

The interview will be presented in three parts over the coming days.

Part I: A World in Conflict

Speaking from his vantage point in the Vatican and his meetings over the years with heads of state, senior government ministers and religious leaders from all continents, Archbishop Gallagher expressed his profound concern at the conflicts and polarization in countries across the globe. “We’re getting to a very dangerous situation worldwide,” he said, “and it wouldn’t take much to make things even worse” and to arrive at “a world in conflict.” He emphasized the urgent need “to make our multilateral institutions work better” and advocated a forceful engagement at the political, diplomatic and church levels “to heal” the conflicts.

“We’re getting to a very dangerous situation worldwide,” Archbishop Gallagher said, and it wouldn’t take much to make things even worse” and to arrive at “a world in conflict.”

He spoke about the war in Ukraine and his recent visit to that country, as well as relations between the Vatican and the Kremlin. “It’s difficult to see a solution on the horizon,” he said, while emphasizing the need to “keep the hope of dialogue and negotiation alive.” He confirmed that the pope intends to visit Kyiv, perhaps as soon as August.

As secretary for relations with States since November 2014, you have gained an extraordinary overview of the situation across the globe. How do you read the geopolitical situation in the world today?

I think it’s a situation of unprecedented conflict and polarization. Going back to the pope’s early expression that we are experiencing the “Third World War piecemeal,” everybody thought he was talking nonsense or at least very imprudently, but it’s all proven to be correct. The other day I gave a talk to a group of women religious, and we took four maps of different parts of the world. I went through the countries with them, and it was amazing how nearly everywhere in the world there is some form of conflict; it may not be a war, but it may be social polarization or a conflict between different political systems within a country.

“Going back to the pope’s early expression that we are experiencing the ‘Third World War piecemeal,’ everybody thought he was talking nonsense, but it’s all proven to be correct.”

But, certainly, the most worrying thing, the real danger is that you have centers of conflict around the world, and there’s a danger that you get sort a cross infection and that all the dots suddenly become joined up, and we find ourselves in a world in conflict, not just regions or countries and continents, but a world in conflict. I think that is the reality today. I think it’s what we must work at, whether we’re working on a political level or a diplomatic level or at the church level, we have to recognize the reality of this conflict and try to heal it.

The pope has said that we’ve effectively got World War III. Is it so?

I don’t think we’ve formally got World War III because to have a war you have to declare war. But certainly we are getting to a very dangerous situation worldwide, and, as we know, it wouldn’t take much to make things even worse. Therefore, I think we have to be working now, not just saying, “If things get worse in a couple of years’ time, maybe we have to do something.”

We’ve got to try and make our multinational, multilateral institutions work better. We have to try and get the United Nations to be incisive in confronting and resolving some problems in the world. And if necessary, maybe these institutions have to be reformed. For example, here in Europe, the Organization for Security and Cooperation is more or less paralyzed. We have to work at this, I think, in some way, making them more efficient and proactive.

Would you agree that multilateralism has to a large extent crumbled in these seven and a half years since you became secretary for relations with states?

Crumbled is not the right word, but I think it’s been severely debilitated. At the very least, we’ve still got institutions, we’ve still got some goodwill; but, yes, the world has possibly not been well served by these institutions. The pope, however, is very committed to multilateralism. He believes in the multilateral system, even if, I think, he believes in a reformed and renewed multilateral system, more responsive to the challenges of the 21st century.

“We are getting to a very dangerous situation worldwide, and, as we know, it wouldn’t take much to make things even worse.”

People always talk about rules-based organizations, but, obviously, people have become cherry picking with the rules: I follow the rules if it suits me; otherwise, I don’t. And this is very dangerous. Unfortunately, in these seven and a half years, where I’ve been working, although many things have progressed in some ways, at the same time, generally speaking, in international relations there is a profound crisis. By recognizing the crisis and going back to the old meaning of crisis, we have to grasp the opportunities that the current crisis presents us do our best to implement improvements and to make things work.

You visited Ukraine in May. Did you learn something from your visit that you didn’t know before?

But there, although I didn’t see personally some of the things that have been described as happening in Ukraine in these months, I did go to some of the places where those things had happened and saw the degree of destruction in Irpin and the obvious traumatization of the town of Bucha, where we visited the place where the bodies had been buried and visited the photographic exhibition in the Orthodox church there. That’s what I think struck me most and going into the government buildings which were all blacked out, and the people were living downstairs in the lower parts of the buildings with very rudimentary lights and passageways, and everything was protected by sandbags. There was much to experience. And then I suppose from that experience, to learn.

How do you read the situation today in Ukraine?

Obviously, the war continues. It’s to some extent what people describe as a war of attrition. But there’s a great loss of life. It’s difficult to see a solution on the horizon. I obviously hope and pray that a solution will come about and that it will come about through negotiation and diplomacy, to which certainly the Ukrainians are committed. But it’s very difficult for the Ukrainians to envisage real negotiations at this time because of the depth of the suffering and the trauma of the people. I’m afraid that it’s going to go on, with losses on both sides.

“It’s very difficult for the Ukrainians to envisage real negotiations at this time because of the depth of the suffering and the trauma of the people.”

I think it is incumbent upon the international community to keep the hope of dialogue, the hope of negotiation alive. And I think that’s certainly part of the role of the Holy See at this time, without ignoring the violence and the conflict, at the same time saying, “Ultimately, we have to talk; ultimately, there has to be negotiation; ultimately, there has to be the restoration of peace.”

Has there been any approach from Moscow to the Vatican regarding mediation?

Cardinal Pietro Parolin has said that at different times, including when the pope visited the Russian Federation’s Embassy to the Holy See, the Vatican has made various requests to the Kremlin. Has there been any positive response from the Kremlin to any of these requests?

And there has been no invitation to Moscow for the pope?

No, not explicitly. Again, I think there have been some nice noises, some positive remarks, but nothing as explicit as an invitation.

When you were in Kyiv, you described Russia as “the aggressor” in Ukraine, and you said the Holy See supports “the territorial integrity of Ukraine.” I take it you were speaking in the name of the pope.

I was speaking in the name of the Holy See, and the Holy Father hasn’t corrected me so far on what I’ve said on his behalf. I should point out that when we talk about the Holy See supporting the sovereignty and territorial integrity of Ukraine, that is our position, and we believe that it corresponds to the position of the government. Now that’s a point of departure. It’s up to the Ukrainians to negotiate with others, with the Russians, obviously, in particular. Now, if they want to modify that territorial integrity, that is up to them. But as far as we are concerned, I understand that that is their position to this day, and we respect it.

It’s a principle that one applies across the board. For many decades, for example, we respected the sovereignty and the territorial integrity of the Baltic countries during the Soviet occupation. We never changed our position on that, and that was very much appreciated by those countries, particularly when they regained their independence after the fall of the Soviet Union.

So you wouldn’t recognize a unilateral declaration of independence of the Donetsk and Luhansk regions?

No, we wouldn’t recognize any such unilateral declaration of independence.

You said on Italian state television some days ago that Pope Francis could go to Kyiv in August? How realistic is that?

I don’t know. I’m not the pope. I’m not the pope’s doctor. And we’ve yet to make the visit to Canada. But I think the pope is in good spirits. He undoubtedly has made great progress in his mobility. Maybe when we come back from Canada, and with the coming of August, it may be that he will want to start looking at that seriously and making some plans.

But from what you know, he’s determined to go?

Oh yes, he wants to; he wants to and he feels he should go to Ukraine.

Despite the lack of an invitation from Moscow?