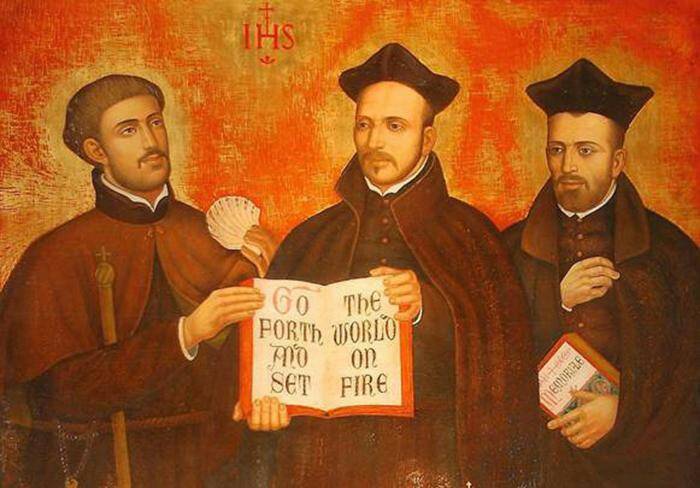 Markus Friedrich is passionate about Jesuit history—how it is studied, how it should not be studied and about its larger importance today. A professor of history at the University of Hamburg, Friedrich has publishedThe Jesuits: A History, an English version of a text he first wrote in German under the title Die Jesuiten: Aufstieg, Niedergang, Neubeginn. Translated by John Noel Dillon, it is a door stopper of a book (at 872 pages), offering a sweeping and engaging account of nearly five centuries of labor by members of the Society of Jesus.

Studying the Jesuits, said Friedrich, is a helpful prism through which historians and others can engage the world: “The best scholars do not study the Jesuits per se but rather use the Jesuits to better understand larger issues,” he told me. The book also offers what Friedrich hopes is a reason to celebrate the Jesuits, a multifaceted, heterogeneous social entity. Recently, he arose in the predawn moments in Hamburg to discuss his book with me by video conference. The following interview has been edited for clarity and length.

The book offers a reason to celebrate the Jesuits, a multifaceted, heterogeneous social entity.

Before we get into this history of the Jesuits, please tell us the history of this book. Why tackle such a large story?
I had started studying the Jesuits in a purely academic fashion by writing a book on the order’s administration. The idea for this project came from the original German publisher, who sensed a need for a larger examination of the Society of Jesus. As the book hopefully shows, the Jesuits were part of nearly every story you can tell about the last 500 years of European and even global history. So it was an enriching experience for myself to learn about topics that I never expected to study, such as military planning, and to mature as a historian.

On those unexpected topics, what surprised you when engaging this larger history?
First, geographically, it was a rollercoaster experience—around the world in 80 days—to learn about different regions. Indeed, what I know now about southern Argentina or Vietnam, for example, comes largely from looking at the Jesuit experience in those locations. Second were the unexpected individuals. One of the beauties of Jesuit history are the well-known figures who led lives worthy of Hollywood movies. Even more fascinating to me, though, were the less well-known individuals. One example is Georg Kamel, a Jesuit naturalist, a lay brother in Asia who gave his name to the camellia flower. And there were artists and others who, through the Society, found ways to lead amazing lives.

I discovered Jesuits like Georg Kamel, a naturalist, a lay brother in Asia who gave his name to the camellia flower.

Those observations might help answer my next question. John O’Malley, writing for America in 2005, called the Jesuits “a new hot topic.” And yet interest has only grown since then. What makes the study of Jesuit history particularly fascinating today, especially for non-Jesuit scholars?
There is a technical answer, as the Jesuits provide a glorious set of sources that are abundant and multifaceted. The order has it all, from administrative, bone-dry details to the personal experiences of those details in deeply moving narratives. Also, as an entry point to history more generally, the Jesuits sit comfortably with recent scholarly interests, such as balancing local studies with a global perspective. If you are a cultural historian, you inevitably come across the Jesuits very quickly. The Jesuits are a great body of actors, such as the missionary traveling through Sonora on his mule or what have you.

What advice can you give to your fellow non-Jesuit scholars when engaging with materials full of a vernacular unique to the order? And is there a role for Jesuit scholars to play in the examination of these sources?
I tell young scholars studying a Catholic order that you must first commit yourself to understanding how its members thought. You can disagree about original sin as much as you want, but you have to understand how your subjects approached it and were motivated by it. So you have to learn the vernacular and even speak it yourself, and this is the Jesuits’ unparalleled advantage. They live this life. I find it extremely helpful to have Jesuits review my own observations and reformulate in their own lingo. Sometimes I think that Jesuits should be even more adventurous and outspoken in claiming their own history, as O’Malley took repossession of that story in The First Jesuits and made it accessible to a larger audience.

You can disagree about original sin as much as you want, but you have to understand how your subjects approached it.

So, where is that field going, and where should it be going?
A generation ago, no one would have seen Jesuit studies as a clearly demarcated field, and we have come a long way. I look with awe at the founding generation of scholars—John O’Malley, S.J.. the French historians Antonella Romano and Pierre-Antoine Fabre, and the Italian researcher Sabina Pavone. As the field is booming, it is increasingly hard to identify neglected topics, but there are small lacunae. Perhaps economic history has potential or technical aspects such as the legal framework of the Society of Jesus or Jesuits and liturgy. Yet, by and large, for the early modern Society of Jesus, the focus should be on nuancing our overall image. Of course, the big elephant in the room is the order of the 19th and 20th centuries. So much work needs to be done, and some of the most exciting work now is with modern, contemporary Jesuit history. What we require, though, is an integration of pre-suppression scholarship with that of the restored Society. [The Jesuits were formally suppressed as a religious order by the papal brief “Dominus ac Redemptor,” issued by Pope Clement XVI in 1773. They were fully restored in 1814 by Pope Pius VII.]

Sometimes I think that Jesuits should be even more adventurous and outspoken in claiming their own history.

I fear the field falling into two camps: the historians of the old Society and those of the new Society. That would be devastating for the latter. We cannot understand the Jesuits after 1814 without building our perspectives with a strong knowledge of the history before then. It is not because of an unbroken continuum, but rather because 19th- and 20th-century Jesuits knew well their order’s past and had to reckon with that past. We have to relate these modern developments, in full, with the fundamental pre-modern Jesuit life, to integrate them with the longue durée history. [The study of history centered on the evolution of long-term historical structures.] Otherwise, our understanding will fall short of its potential. More scholars should ask questions that do not break with the suppression. Why not write on topics that run from 1650 to 1950?

The best scholars do not study the Jesuits per se but rather use the Jesuits to better understand larger issues.

You do like long books, don’t you?
Yes, I do! But I know of only a few scholars with a good understanding of both sides of the 1814 divide. Yet, as we engage larger issues, this could pose a problem for the field. Another problem emerges if Jesuit studies becomes a cottage industry. That is bold for me to say, having written such a large book on the Jesuits. The best scholars do not study the Jesuits per se but rather use the Jesuits to better understand larger issues. We must be careful not to lose that broader perspective while also avoiding the pitfalls of periodization. Things are improving, though I found in writing this book that we still lack a chronologically overarching narrative for all of Jesuit history.

You wrote the German edition of this book some time ago. Based on these more recent improvements, what would you add to this already large book?
I started writing that edition in 2012, so a decade ago now and before the surge of interest in the Jesuits after 1814. What would I do differently now? I would add volume two! The modern period deserves as thorough an examination as the early modern, though immersing myself in the sources and providing a fine-grained view could take a lifetime.

I hope that people see how multifaceted Catholicism has been—and is—through the Jesuits’ experience.

Have you noticed changes in the book’s reception from its German version to this English edition?
In many ways, the book came back as a zombie to me: I had laid it to rest, after so many years of work, and it then resurfaced. Still, I am grateful for the generally positive reception. I have been astonished, though, that for the American audience the Jesuits are a recent phenomenon, associated mostly with the 19th and 20th centuries, while the European perspective is the opposite. Especially in Germany, the fascination is much more strongly with the Society of Jesus of the early modern period because the Jesuits do have less of a public presence these days.

Meanwhile, in the United States, the dominant interest is of more recent developments, as there is a more present cultural Catholicism. A magazine like America, for example, might have parallels in Europe, and yet it has a much larger public impact in this country. It reflects a Catholic milieu that might not be academic but that is deeply informed by cutting-edge research and that is deeply interested in how historical examinations relate to current events. I often wonder what it means for Jesuit life to have such a different public presence in the United States, at least compared to Germany.

Given that milieu, what are the lessons of Jesuit history? Specifically, what do you want Jesuits and their collaborators to take from The Jesuits: A History?
That is a big, big question.I hope that people see how multifaceted Catholicism has been—and is—through the Jesuits’ experience, and I hope that people see it is good to have such heterogeneity. If this book has a broader message, it is that the Jesuits offer a productive acceptance of a sometimes even contradictory plurality in Catholicism. That fact should inspire us in the 21st century. Yes, there were struggles for unity—especially within an order as diverse as the Society of Jesus—but the Jesuits tell us a social body can have an impact precisely because it is diverse, plural and has different agendas. Yes, there is friction, but, today, we should celebrate this openness and embrace it as a good.

So, why were the Jesuits so successful?
They refused to identify themselves with any one thing, other than their desire to save souls. Notice, though, that goal is entirely abstract, and there is nothing limiting to that goal. So, be everything to every person and do not set any limits. The Jesuits should be proud of their past, should know their past, should cultivate their familiarity with their shared history and should continue to be open about it. Because if you know your past, then you can even choose to liberate yourself from it. I hope the Jesuits continue in their critical, constructive way of engaging with their past.