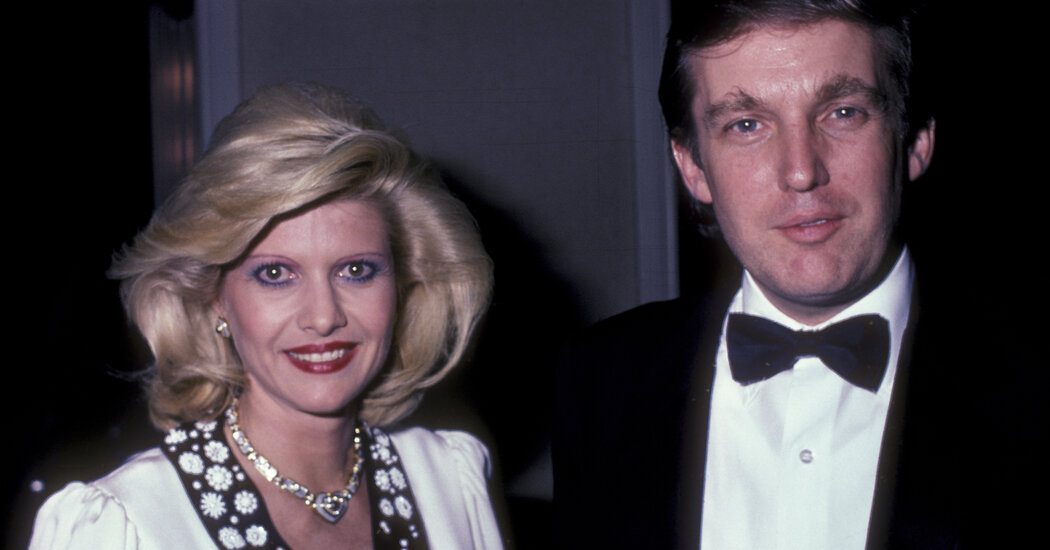 Ivana Trump, the glamorous Czech American businesswoman whose high-profile marriage to Donald J. Trump in the 1980s established them as one of the era’s quintessential New York power couples, died on Thursday at her home in Manhattan. She was 73.

Mr. Trump announced her death in a statement on Truth Social, the conservative social media platform he founded.

The New York City police were investigating whether Ms. Trump fell down the stairs at her townhouse on the Upper East Side, according to two law enforcement officials with knowledge of the matter. One of the officials said that there was no sign of forced entry at the home and that the death appeared to be accidental. A spokeswoman for the city’s chief medical examiner’s office said it would investigate the death.

Throughout their marriage, Ms. Trump commanded almost as much media attention as her husband as they helped define the 1980s as an era of gaudy excess among the elite, an image that Mr. Trump used to fuel his turn as an outsize television personality before his 2016 run for the White House.

It was Ms. Trump who rechristened her husband “the Donald,” a moniker that became a fixture in New York’s tabloid press, where she was a regular and boisterous presence. Every bit as ambitious as her husband, she liked to brag that “in fifty years, we will be the Rockefellers.”

Where her husband was brash and often uncouth, Ms. Trump came across to the city’s moneyed elite as charming and sophisticated, opening doors to rarefied social circles that Mr. Trump could then barrel through.

She was more than a socialite: Though Mr. Trump often bragged about his business prowess, Ms. Trump played a critical part in building his real estate empire, beginning soon after their marriage in 1977.

Often described as detail-obsessed and a workaholic, she worked alongside her husband on several of his early signature projects, like the development of Trump Tower in Manhattan and the Trump Taj Mahal casino in Atlantic City, N.J.

She was the vice president for interior design for his company, the Trump Organization, and managed one of his most prized properties, the Plaza Hotel, all while raising their three children.

The couple’s divorce in 1990, driven in part by Mr. Trump’s affair with Marla Maples, whom he later married, provided tabloid fodder for weeks. In a deposition, Ms. Trump accused him of raping her, though she later said that she had not meant the word literally.

The divorce made Ms. Trump something of a heroine for spurned wives everywhere — she even had a cameo in the 1996 film “The First Wives Club,” in which she tells a group of disgruntled divorced women, “Don’t get mad, get everything!”

She used her business prowess to great effect as well. She developed a line of clothing, jewelry and beauty products, which she promoted through outlets like the Home Shopping Network and QVC. She invested in real estate, domestically and in Europe, and wrote several books, including “The Best Is Yet to Come: Coping With Divorce and Enjoying Life Again” (1995) and, most recently, “Raising Trump” (2017), a memoir of her marriage to Mr. Trump.

In a family statement posted on Facebook, her children Eric, Donald Jr. and Ivanka Trump, wrote, “Our mother was an incredible woman — a force in business, a world-class athlete, a radiant beauty, and caring mother and friend.”

And on his social media platform, Mr. Trump wrote of her, “She was a wonderful, beautiful, and amazing woman, who led a great and inspirational life.” He added, “Rest In Peace, Ivana!”

The Czech-American businesswoman, whose high-profile marriage to former President Donald Trump in the 1980s helped make him a household name, died at 73.

Ivana Marie Zelnickova was born on Feb. 20, 1949, in Gottwaldov, Czechoslovakia, now known as Zlin and located in the Czech Republic. Her father, Milos Zelnícek, was an electrical engineer, and her mother, Marie (Francova) Zelnickova, was a telephone operator.

Athletically gifted as a child, Ivana was particularly adept at skiing and competed with the Czech junior national team, an experience that allowed her to see at least some of the world beyond her small town. (Although Mr. Trump liked to say that she was an alternate on the Czech Olympic ski team, there is no proof that this was the case.)

She attended Charles University in Prague and received a master’s degree in physical education in 1972.

She was briefly married to Alfred Winklmayr, an Austrian ski instructor, in what she later termed a “Cold War marriage,” which allowed her to receive an Austrian passport and move to Canada. She said that they never lived together and that the marriage was “dissolved” in 1973.

In Canada, she worked as a ski instructor and as a model promoting the 1976 Olympics in Montreal. It was while working at a reception in New York that she met Mr. Trump, who at 29 was just beginning to plot his rise to the top of the Manhattan real estate world.

The two married less than a year later in a ceremony officiated by Norman Vincent Peale, the author and Protestant clergyman.

One of Mr. Trump’s first big projects was redeveloping the aging Commodore Hotel, adjacent to Grand Central Terminal in Midtown Manhattan. Ms. Trump, who was then working on her interior design license, jumped in alongside him. At first she oversaw plumbers and electricians, and later, near the end, she passed judgment on “every pillow, every table and chair, and every brass column,” as she told Vanity Fair in 1988.

The hotel reopened in 1980 as the Grand Hyatt, a glitzy marker of a new decade of rapid development and material excess, qualities that would become synonymous with the Trump brand.

Ivana soon became an equal if behind-the-scenes partner in Mr. Trump’s business. She emphasized opulence: It was she who chose the pink marble and gleaming brass of Trump Tower, on Fifth Avenue. Though she insisted that her husband was the boss, it was also clear that she was among his closest confidantes — advising him, for example, on his decision to go into the casino business in Atlantic City.

She held even more sway over the growing Trump household. In the introduction to “Raising Trump,” she bragged about Donald Jr., Ivanka and Eric and minced no words about who did what in their upbringing.

“I believe the credit for raising such great kids belongs to me,” she wrote. “I was in charge of raising our children before our divorce, and I had sole custody of them after the split. I made the decisions about their education, activities, travel, child care and allowances. When each one finished college, I said to my ex-husband, ‘Here is the finished product. Now it’s your turn.’”

The couple used their wealth to take on the New York social scene, but they ended up projecting themselves far beyond it, into the TV sets and reading material of Americans far from the skyscrapers of Midtown. They became fodder for gossip columns, People magazine profiles and even “Saturday Night Live” sketches.

And as the couple rode high toward the end of the 1980s, with a fortune estimated at $3 billion, she coyly batted down speculation about an imminent run for the White House by her husband.

“It’s not for the next 10 years, definitely not,” she told Vanity Fair. “There is so much to do. We have invested in this town close to a billion dollars. We can’t just put it in escrow and go to the White House. It would go down the drain in a second. It’s too young, too new. But in 10 years Donald is going to be just 51 years old — a young man.”

A year later, however, their marriage began to implode as rumors swirled about Mr. Trump’s relationship with Ms. Maples. The Trumps were seen fighting in public, and Mr. Trump reportedly locked her out of her office at the Plaza Hotel.

After almost a year of gossip and legal posturing, a court granted the couple a divorce in December 1990 on the grounds of cruel and inhumane treatment by Mr. Trump. But a bitter settlement fight ensued when Ms. Trump insisted that he owed her half of his fortune — not knowing, perhaps, that he was close to bankruptcy at the time.

Ms. Trump developed a following of sorts: Fans held candlelight vigils outside the Plaza and waited for hours to get a glimpse of her leaving home or court. Liz Smith, the venerable gossip columnist, became a sort of Ivana whisperer, filling her articles with chunks of dirt about Mr. Trump and helping to establish Ms. Trump’s post-divorce image as a strong woman unfairly wronged.

The couple finalized the settlement in 1992, largely along the lines of their last prenuptial agreement. She received $14 million, their 45-room mansion in Greenwich, Conn., an apartment in Trump Plaza on the Upper East Side, and access to their Mar-a-Lago mansion in Florida for one month a year. She also received $650,000 a year to support their three children.

Ms. Trump bought her Upper East Side townhouse, just off Fifth Avenue near Central Park, after the divorce and decorated it in her own ostentatious style.

“My home reflects my style perfectly,” she wrote in “Raising Trump.” There was the marble staircase, heading up to the “white piano room” on the second floor, followed by a “leopard sitting room” another flight up.

She began to build her own business empire, this time around fashion and beauty, and, more important, sought to construct an identity separate from her famous ex-husband’s.

“You don’t have to put down the second name,” she told a reporter from The New York Times in 1995. “Ivana is what the people call me.”

While developing her clothing and jewelry business, she hired three secretaries to help her handle mounds of fan mail, which she tried to answer personally. She became a regular on daytime talk shows and was always happy to make a TV or movie cameo, her high pile of blond hair and her still-pronounced Czech accent instantly recognizable.

Despite her admonition in “The First Wives Club” to “take everything,” she largely spared Mr. Trump from further public embarrassment.

“This is not a revenge book for Donald,” she told The Times about “The Best Is Yet to Come,” her 1995 book. “This is an advice book for women. I threw in some of my experiences, but 90 percent is the stories of the women. The last thing I wanted to do is bring Donald in.”

She married two more times. Her marriage to Riccardo Mazzucchelli, an Italian businessman, in 1995, ended in divorce two years later. She married the Italian actor Rossano Rubicondi in 2008, in a ceremony at Mar-a-Lago, with Mr. Trump in attendance. That marriage lasted less than a year.

Along with her three children, Ms. Trump is survived by 10 grandchildren.

Although she said little about her ex-husband’s presidency, Ms. Trump occasionally rankled Melania Trump, who married Mr. Trump 15 years after he and Ivana Trump were divorced — with Ms. Maples, his second wife, sandwiched uncomfortably in between.