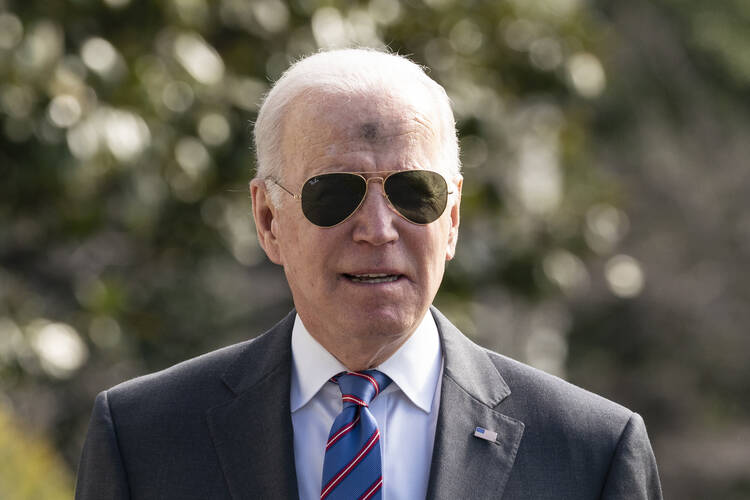 President Joe Biden told reporters on Ash Wednesday that earlier in the day he met with a cardinal for prayer and ashes—and revealed what he has given up for Lent.

Asked by a reporter to comment on the request from Pope Francis that Catholics devote the first day of Lent to prayer for peace in Ukraine, Mr. Biden said: “I was with the cardinal this morning. He came over, and he gave me ashes. We both prayed for that, for the people of Ukraine.”

The meeting was with Cardinal Wilton Gregory, the archbishop of Washington.

President Joe Biden told reporters on Ash Wednesday that earlier in the day he met with a cardinal for prayer and ashes—and revealed what he has given up for Lent.

“As President Biden shared this morning, Cardinal Gregory paid a brief pastoral visit to the White House for Ash Wednesday,” a spokesperson for the archdiocese said in a statement. “It was a private moment, at which the President and the Cardinal prayed for the people of Ukraine. Cardinal Gregory also gave the President a cross-shaped mark of ashes on his forehead, a traditional Christian way to mark the beginning of Lent.”

Wednesday’s meeting was not the first time the pair met. They appeared alongside one another at a Covid-19 memorial service in January 2021. Cardinal Gregory waded into the controversy about some of Mr. Biden’s political views that put him at odds with church teaching, stating in 2021 that though he disagreed with Mr. Biden’s stance on abortion, he would not deny him Communion. The cardinal also said in 2021 that he looked forward to occasionally discussing faith with the president.

“He’s not going to be on speed dial, and I hope I’m not on his speed dial,” the cardinal told NBC News last year. “But there will be moments when I will be able to speak to him about faith, about the works that he is trying to accomplish that we can be supportive of but also areas where we’re not going to agree. But I’m going to always try to do it in a respectful way.”

“All sweets, and you know me, I start off with dessert. No ice cream, nothing,” Joe Biden said when asked what he is giving up for Lent.

With a light smudge of ashes on his forehead, the president also revealed on Wednesday what he is giving up for Lent.

“All sweets, and you know me, I start off with dessert. No ice cream, nothing,” he said in response to a question.

Mr. Biden has appeared in public with ashes on his forehead on many Ash Wednesdays during his long political career, including in 2010, when a Sky News anchor mistook them for a bruise. Last year, the president received ashes at Georgetown University and released a statement about Lent.

In his State of the Union address last night, the president reaffirmed his support for legal abortion, which has led to public calls from some bishops for him to refrain from receiving Communion.

“The constitutional right affirmed by Roe v. Wade—standing precedent for half a century—is under attack as never before,” he said. “If you want to go forward—not backward—we must protect access to health care. Preserve a woman’s right to choose. And continue to advance maternal health care for all Americans.”

A reporter asked Mr. Biden on Wednesday morning, “Why do you support abortion as a Catholic?”

“I tell you what, I don’t want to get into a debate with you about theology,” he said. “I’m not going to make a judgment on other people.”

The president and First Lady Jill Biden are traveling to Wisconsin for an event about U.S. infrastructure.