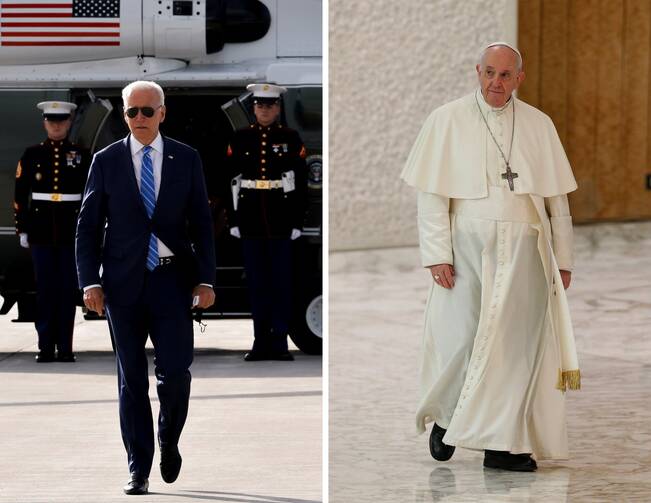 President Joe Biden, who will meet Pope Francis at the Vatican on Oct. 29, is Catholic. The country’s first Catholic president, John F. Kennedy, visited the Vatican, too. But meetings between U.S. presidents and popes have been a staple of politics since the Kennedy era, whether the president was Catholic or not.

Woodrow Wilson was the first sitting president to meet a pope, visiting Pope Benedict XV amid peace negotiations after World War I. Dwight Eisenhower met John XXIII as part of an international goodwill tour. Lyndon Johnson first met with Paul VI when the pontiff came to New York for a historic address at the United Nations in 1965. Richard Nixon twice met with Paul VI, despite the Pope’s clear opposition to the war in Vietnam. Gerald Ford met with Paul VI in 1975, and Jimmy Carter greeted the new pope, John Paul II, in 1979.

Meetings between U.S. presidents and popes have been a staple of politics since the Kennedy era, whether the president was Catholic or not.

Those meetings all preceded the establishment of formal diplomatic relations between the United States and the Holy See, as the Vatican city-state is known in formal diplomacy. The two states finally exchanged ambassadors in 1984, under Ronald Reagan and John Paul II. Both were committed anti-communists, and their move to establish official ties marked an important geopolitical alliance.

In my research on the relationship between Catholicism and U.S. politics, their partnership stands out as a turning point – and a boon for Reagan. At the time, he needed a Catholic ally, and found one in John Paul II.

The Holy See has been an independent city-state since 1929, but in reality, the pope has been a head of state at least since the eighth century.

It is a unique situation: a religious leader functioning fully as a head of state. Yet the Roman Catholic Church occupies a unique place in world history. As the first global power, the church has shaped world politics for centuries. Today the church is not only home to more than a billion believers, but it directly and indirectly supports a tremendous amount of nonprofit work around the world.

When Reagan formalized the long-standing U.S. diplomatic relationship with the Holy See in 1984, the church’s wide influence provided a good reason. But not the only one.

When Reagan formalized the long-standing U.S. diplomatic relationship with the Holy See in 1984, the church’s wide influence provided a good reason.

The previous year, shortly ahead of his reelection campaign, Reagan had reason to worry that Catholic voters might not support him. U.S. bishops had published a pastoral letter, “The Challenge of Peace,” which said that “good ends (defending one’s country, protecting freedom, etc.) cannot justify immoral ends (the use of weapons which kill indiscriminately and threaten whole societies).” It was a direct challenge to the Reagan administration’s arms buildup, which had heated up the Cold War.

The administration went to lengths to discredit the bishops, suggesting they were out of step with the pope. American public opinion was turning against the arms race, and Reagan needed a powerful ally who could help him hold on to Catholic voters.

Reagan found that ally in John Paul II, who shared his wariness toward the Soviet Union. While the bishops’ pastoral was being drafted – a process journalist Jim Castelli has traced in depth – John Paul warned that the church must not call for the U.S. to disarm unilaterally. The Polish pope had experienced Soviet domination and hoped to liberate the world from communist influence.

Given the president and the pope’s common cause, Rome likely would be more sympathetic to Reagan’s perspective than the U.S. bishops. The U.S. established diplomatic relations with the Holy See eight months after publication of “The Challenge of Peace” and 10 months before the 1984 election.

Given the president and the pope’s common cause, Rome likely would be more sympathetic to Reagan’s perspective than the U.S. bishops.

Abortion politics heated up in the run-up to the election, as pro-choice Catholic Mario Cuomo, the Democratic governor of New York, considered running for president. The Democrats eventually nominated Walter Mondale, with another pro-choice Catholic, Geraldine Ferraro, as his running mate. Reagan, who positioned himself as pro-life, focused attention on the issue in another effort to win back Catholic voters, one assured to carry approval from the pope.

Reagan won the 1984 election in a historic landslide. He carried 49 states and took the greatest share of the Catholic vote that any Republican had won to that point in history.

Today, 37 years later, the Biden presidency faces its own Catholic dilemma – the latest chapter in a long struggle about Catholics in American public life, highlighting a deeper rift between U.S. bishops and the Vatican.

Many U.S. bishops want to bar public figures from receiving the sacrament of Communion – the focus of every Catholic Mass – if they support the right to an abortion, which the church considers a grave sin. In 2019, a South Carolina priest refused to offer Communion to Biden because of the politician’s pro-choice stance.

As Biden prepares for his papal visit, the administration may have Reagan’s instructive history in mind.

In November, U.S. bishops will gather to debate a document on “Eucharistic coherence,” which may contain instructions about who is eligible for Communion.

But the Vatican has all but urged the bishops not to go ahead with the document.

“I have never refused the Eucharist to anyone,” Pope Francis told reporters in September 2021, urging priests to think about the issue “as pastors” rather than from a political viewpoint.

As Biden prepares for his papal visit, the administration may have Reagan’s instructive history in mind. The president – like Reagan – may find a more receptive ear in Rome than at home.