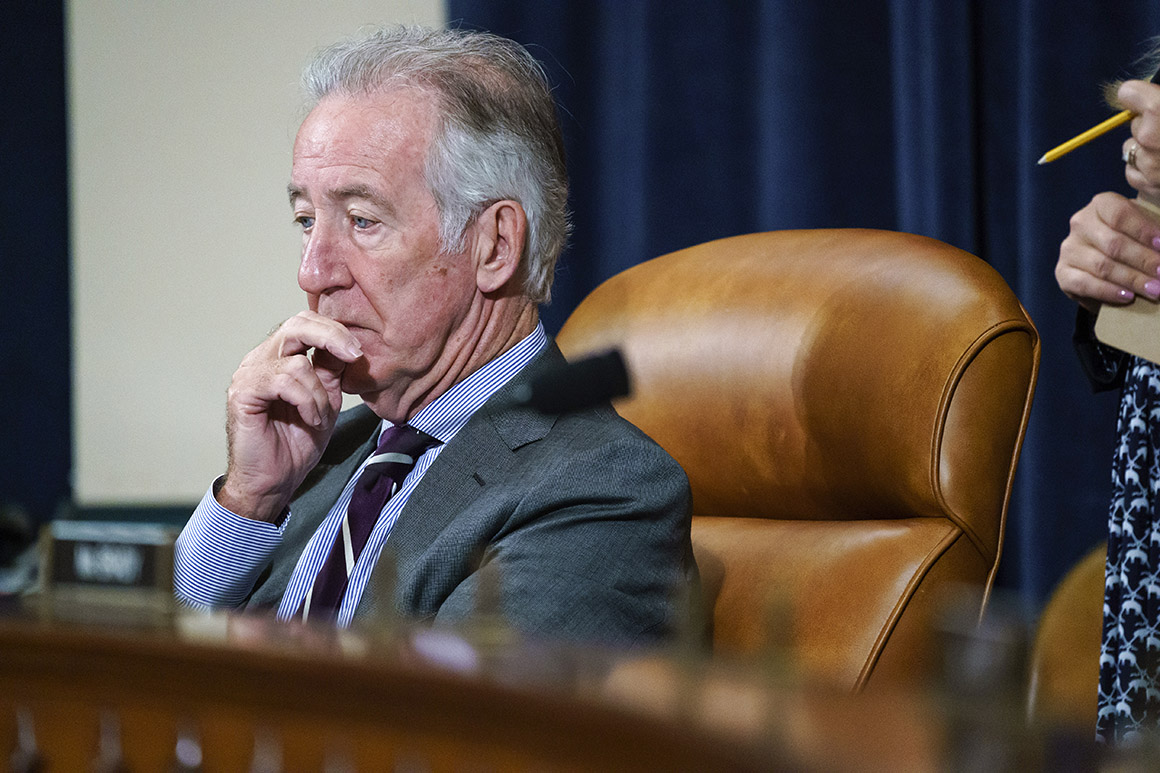 House Democrats have proposed just over $2 trillion worth of tax increases in legislation unveiled Monday, according to the nonpartisan Joint Committee on Taxation, roughly split between corporate tax provisions despised by powerful Washington business groups and individual rate hikes aimed at the country’s biggest earners. The increases, along with money for increased IRS enforcement and drug pricing reforms fiercely opposed by the deep-pocketed pharmaceutical lobby, are meant to offset what could be a once-in-a-generation investment in climate change mitigation and expansion of the social safety net.

The draft text released by House Ways and Means Chair Richard Neal (D-Mass.) this week included milder tax hits in most circumstances than the White House proposed earlier this year. And his Senate counterpart, Finance Chair Ron Wyden (D-Ore.), has proposed his own tax plans, despite efforts by Democrats in each chamber to “pre-conference” their bills to minimize differences and speed the process wherever possible.

“Some big corporations are spending millions of dollars in — legitimately, I mean, they’re lobbying — to try to escape their obligation to pay the taxes they owe, leaving working families to pay a larger share of the burden,” he said at the White House in remarks on the August jobs report. As he predicted, business groups and industries impacted by the tax increases slammed the House bill this week, with Neil Bradley, the top lobbyist at the U.S. Chamber of Commerce, calling it an “existential threat to America’s fragile economic recovery and future prosperity.”

A number of interest groups have launched six and seven-figure ad buys in vulnerable members’ districts targeting parts of the Democrats’ bill, including the drug, manufacturing and fossil fuel lobbies.

In an open letter Wednesday morning signed by every member of PhRMA, the trade association representing drug makers contended that Democrats’ plan to allow the government to directly negotiate the cost of some drugs amounted to an “attack” on an industry that’s built up an enormous amount of goodwill during the pandemic.

The plan, which was projected to generate close to $700 billion in government savings over the next decade, hit a major stumbling block Wednesday afternoon when a trio of centrists blocked it from advancing out of the Energy and Commerce Committee.

Democrats hope to pass the bill using a procedure known as reconciliation, which would allow them to sidestep a Senate GOP filibuster. But with some Democratic lawmakers like West Virginia Sen. Joe Manchin calling for as much as $2.5 trillion to be knocked off the measure’s price tag and the cadre of House centrists opposed to leadership’s drug pricing proposal, K Street is feeling good about their prospects of successfully slimming down the tax proposal.

“The question is the size and scope of what ultimately passes Congress,” said Siddiqui. She predicted “a fierce competition not only on which provisions survive, as well as ensuring that some of the revenue offsets strike the right balance on policy and politics,” leading into next year’s midterms.

One former Democratic Senate staffer who’s now a lobbyist was more blunt. “It’s not passing at all like this in the Senate,” they said of Neal’s tax plans, calling it “laughable” that House Democrats are “even thinking about this.”

The lobbyist expressed surprise that Democrats would put vulnerable House moderates in the position of voting on a corporate tax rate higher than what Manchin, who could single handedly sink the bill in the Senate, previously said he would support.

House Democrats’ draft would raise the rate large corporations pay to 26.5 percent, up from the 21 percent Republicans lowered the rate to in their 2017 tax bill. But that’s still less than the top rate prior to that bill (35 percent), and lower than Biden’s preferred top rate of 28 percent.

In interviews this week, lobbyists were also bewildered by House Democrats’ plans to enact nearly $100 billion in new taxes on tobacco and nicotine products, calling the proposal hard to square with Biden’s campaign vow that no taxpayer earning less than $400,000 a year would see their taxes increase as a result of the reconciliation bill.

“That’s absolutely going to affect people that are making less than $400,000,” said Mark Williams, a principal at Ferox Strategies and a former House GOP aide.

While K Street was largely in agreement that Democrats’ lofty tax and spending plans will be scaled back, there is less consensus around the final price tag, if the bill even makes it to Biden’s desk at all.

Williams said there’s a sentiment that Democrats can’t fail to pass the bill, which is being loaded up with as many of the party’s priorities as possible ahead of the midterms. But “they’ve got to figure out how to get it done,” he said. “I just don’t know that anyone has any clarity on how to get it across the finish line.”

Others downtown were more confident in the political prowess of Democratic leadership, including Pelosi, who has shown time and again the ability to keep her fractious party in line and navigate delicate political dynamics to pass major legislation. Biden has begun to personally intervene, too. He hosted two of Senate Democrats’ biggest wild cards — Manchin and Arizona Sen. Kyrsten Sinema — at the White House on Wednesday to discuss the reconciliation package.

The president and top administration officials have also been combing the country as they try to sell the reconciliation bill, along with a separate trillion-dollar bipartisan bill investing in roads, bridges and other more traditional infrastructure items. In the last month, Biden has visited hurricane-ravaged states in the South and Northeast as well as wildfire-scorched Western states, where he’s framed the reconciliation bill’s climate investments as a matter of dire economic importance.

House Democratic leaders are looking to tie passage of the bipartisan measure, which is enthusiastically supported by the business community, to passage of the reconciliation bill in order to retain leverage.

With House committees finally finishing marking up their portions of the package, lobbyists now must scramble to figure out where they can begin chipping away at provisions their corporate clients despise or how to preserve those their clients have fought to have inserted.

It’s a process that’s “been like drinking out of a firehose,” Siddiqui said. She added that this bill is particularly unique because of how drastically it’s likely to change from the time each piece is approved by committees to the time it actually hits the floor.

One key challenge for K Street has been determining who to target for the changes they seek, given all of the moving parts. That can also work in their favor, as it only takes one senator or a few House members to throw a wrench in the process.

And cutting at least a trillion dollars from the bill will be a painful experience for both clients and lawmakers, said one veteran K Street hand who has worked on every major tax bill for the last four decades.

Typically, “whoever gets burned in the House runs to the Senate [and] screams the loudest,” the veteran tax lobbyist said. “And the Senate historically listens to those screams. So you’ll see the Senate probably showing where they see political pain is coming from and trying to start making adjustments accordingly.”

But lobbyists also need to be wary of focusing their efforts on one chamber of Congress at the expense of the other.

“As you get later and later in these negotiations, it’ll be harder to impact the process,” Siddiqui said. “So time is of the essence. Obviously, those who laid the groundwork for their strategies earlier in the process are better situated. But, ultimately it is one of those things where it isn’t over till it’s over, and you cannot take anything for granted.”

There’s still a “narrow window” for securing revisions, said David Skillman, a former Ways and Means staffer now at the law and lobbying firm Arnold & Porter. “People are working and working fast on closing these issues out.”

Even the Biden administration is lobbying the House on favored provisions. In a letter to Neal on Wednesday, Treasury Secretary Janet Yellen dinged the panel for failing to include a provision requiring financial institutions to disclose certain bank account activity to the IRS. Supporters say that would help the IRS reduce tax evasion among the wealthy, who Yellen wrote are responsible for 30 percent of unpaid taxes.

“We are in conversations with the administration on reporting proposals that target sophisticated tax avoidance and evasion without impacting middle class and working Americans,” Neal said at the Ways and Means markup.

Another factor that could play into what stays in the bill and what gets stripped at this point is the complexity of the provision.

“Things that are less well understood, from a policy perspective, are easier to drop out of consideration, and the things that are more well understood are harder to dislodge,” he noted. One example he offered was a border-adjusted carbon tax, which would be applied to imports from high polluting countries, but was left out of the bill.

On the revenue-raiser side, it may be less politically painful to tweak corporate taxes than individual ones. Neal’s bill already doesn’t eliminate loopholes targeting the so-called step-up basis — the ability of the rich to pass assets on to heirs tax-free — or the lower tax rate capital gains on a form of compensation called carried interest championed by the private equity and hedge fund industries. And it steers clear of taxing wealthy Americans’ vast assets, in favor of taxing their income.

On some of these fronts, opposition there came from friendly faces.

Former red state Democratic Senators Heidi Heitkamp and Max Baucus and former congressman Collin Peterson have all warned that taking away the step-up basis break that could crush family farms, an assertion Agriculture Secretary Tom Vilsack has sought to counter.

Opponents of the plan are likely to cling to every poor economic indicator possible as the country grapples with a resurgent coronavirus, supply chain issues and increasing consumer prices to try and pick off votes.

“I’ve seen 16 state polls where the number one issue is the price of items,” the Democratic lobbyist said. The White House “can trot out Austan Goolsbee,” the Obama administration’s top economist and a frequent cable news presence, “to make them feel good about themselves and come up with numbers that show that inflation isn’t real, but it doesn’t matter, people think inflation’s real.”

And even as much of corporate America howls at Democrats’ tax plans, the response from the left has been tepid, underscoring the treacherous path ahead for the party. Patriotic Millionaires, a group of hundreds of wealthy investors and businesspeople that lobby lawmakers to raise their taxes, is so incensed that it’s prepping an ad blitz attacking Neal back home in his Massachusetts district, accusing him and fellow Democrats of letting the ultra-wealthy off the hook.

“Richie Neal and his friends in Washington are rewriting the tax code, and billionaires like Jeff Bezos are popping champagne,” the ad’s narrator says, alongside a photo of the laughing Amazon founder. The spot closes with a photo of Bezos in a space suit. “This isn’t rocket science, Richie,” the narrator says. “Tax the rich, save America.”