Vice President Kamala Harris was on mostly friendly ground in her native California on Wednesday as she campaigned for embattled Gov. Gavin Newsom, who faces a recall election next week.

But that didn’t mean Harris fully escaped any criticism of her time in office.

About 100 yards from the Newsom rally stage in San Leandro, a city of about 90,000 residents located south of Oakland, some protesters chanted and waved the flag of Afghanistan during Harris’ appearance, Fox 40 of Sacramento reported.

Social media posts by Sacramento-based reporter Ashley Zavala, a contributor to FOX 40 and other stations, showed some of the demonstrators.

“Free, free Afghanistan!” the group chants in one video.

In another post, demonstrator Willy Moosayar identifies himself as an Afghan-American whose parents fled the Taliban and came to the U.S. He criticizes Harris for not speaking out about what he describes as a humanitarian crisis in Afghanistan.

He said many Afghan refugees now in the U.S. feel guilt about being safe here while other Afghans who remained behind face the Taliban’s rule.

“We have to fight for them, we have to be their voices,” Moosayar says.

He said the group was protesting Afghan women’s loss of rights under the Taliban as well as reports of Taliban opponents facing retribution from the militant group, he said. 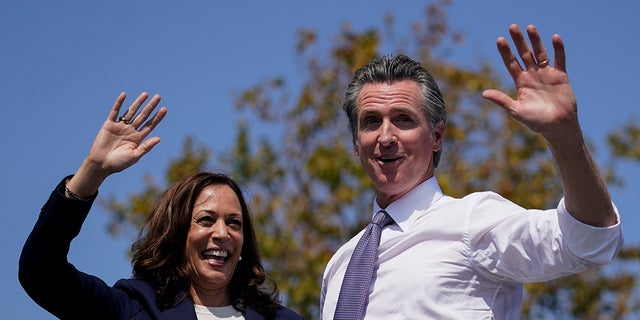 Harris had originally been scheduled to campaign for Newsom in late August, on the way back to Washington from her trip to Singapore and Vietnam, but that event was postponed after the Aug. 26 terror attack in Kabul that left 13 U.S. service members and dozens of Afghans dead.

The vice president did stop at Pearl Harbor in Hawaii to meet with some U.S. troops during her return trip but that event was closed to the press.

Both President Biden and Harris have faced bipartisan criticism for what many critics have described as a “botched” job of removing U.S. troops from Afghanistan after a 20-year U.S. military presence following the terror attacks of Sept. 11, 2001.

The Biden administration has also faced criticism for its handling of evacuations of American citizens and others from Afghanistan since its fall to the Taliban last month.

On Wednesday, White House press secretary defended the administration’s decision to not allow chartered flights from Afghanistan to land at U.S. military bases, claiming concerns about a lack of proper vetting of the people aboard the flights.

Harris on Wednesday became the latest high-profile Democrat to campaign for Newsom. Others have included U.S. Sen. Elizabeth Warren of Massachusetts.

Republican talk show host Larry Elder is viewed as the greatest threat to replace Newsom if voters decide to oust the Democrat at the polls next Tuesday.