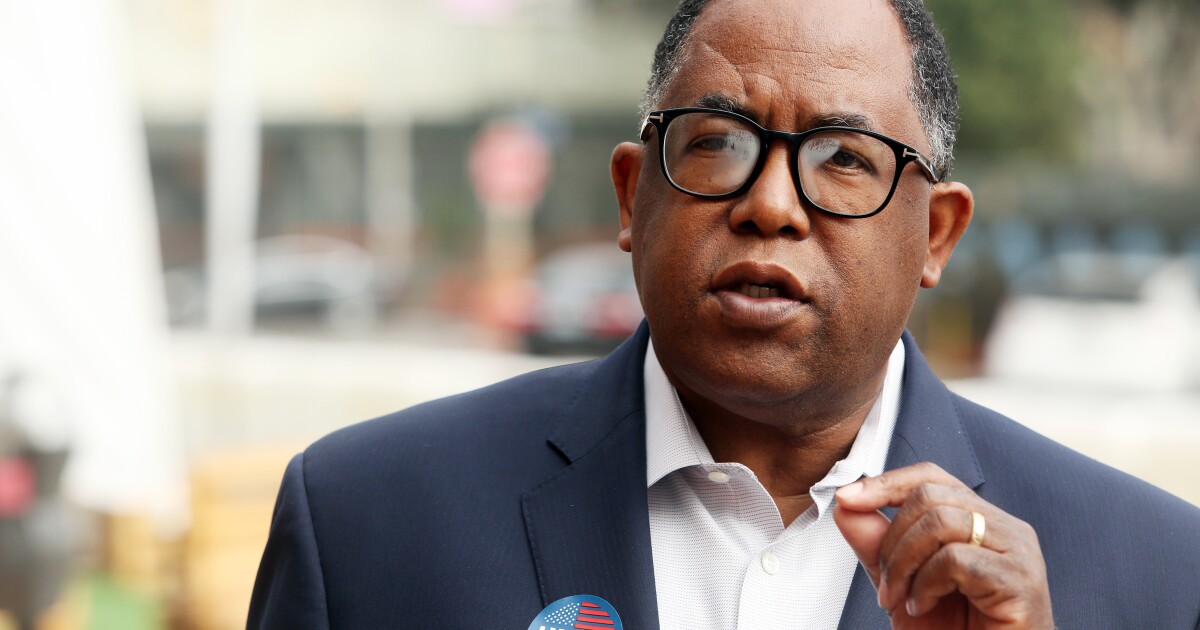 The Los Angeles City Council voted Wednesday to suspend Councilman Mark Ridley-Thomas, one week after the veteran L.A. politician was indicted on federal charges, including bribery and other counts.

The 11-3 vote to suspend him came two days after Ridley-Thomas announced that he would “step back” from participating in City Council meetings and committees. Ridley-Thomas, who has denied any wrongdoing, has said he will not resign and will fight the federal charges against him.

Councilman Mike Bonin unsuccessfully asked the council to refer the suspension question to a committee, rather than proceed to a vote.

In a letter sent Wednesday morning to City Atty. Mike Feuer and the City Council, Ridley-Thomas’ lawyer warned that any suspension of the councilman would be “unlawful.”

Attorney Michael Proctor wrote that the charges involve allegations that took place when Ridley-Thomas was a county supervisor, so the City Council has no grounds to suspend him.

“The motion to be heard today, authored by Council President Martinez and seconded by President Pro Tempore O’Farrell, is not just rash, it is without legal basis,” Proctor wrote in the letter obtained by The Times. “Simply put, there are no allegations that involve Councilmember Ridley-Thomas’s work as a City official.”

Proctor said that a suspension “would be an unlawful act by the Council, and would be immediately subject to challenge in court.”

Asked by The Times on Wednesday if he had been contacting his colleagues about the prospect of being suspended, Ridley-Thomas replied yes, through a spokeswoman. He declined to say whom he had been talking to about the vote.

Proctor’s letter also argues that there “are significant differences between this accusation and those against previous council members who have been indicted of crimes.”

“Unlike the others, the allegations against Councilmember Ridley-Thomas, which are false and will be refuted, make no assertion that he had received any personal gain,” Proctor wrote. He also said that L.A. County “did a comprehensive review” in 2018 after the allegations were first made and that no wrongdoing was found.

In a series of tweets late Tuesday night, Ridley-Thomas’ wife, Avis Ridley-Thomas, was sharply critical of the council.

“Why are you trying to punish my husband before he can defend against lies? Why rush to judgment? Treat him with the same fairness, respect and decency you would want. #DoTheRightThing,” she wrote in a tweet directed at Council President Nury Martinez and Councilman Mitch O’Farrell.

“Whoever would have believed that the LA City Council would act as judge, jury and executioner based on unproven allegations?” she asked in another tweet.

Avis Ridley-Thomas didn’t respond to an email Wednesday about the tweets.

Federal prosecutors allege that Ridley-Thomas conspired with Marilyn Louise Flynn, former dean of USC’s School of Social Work, to steer county money to the university in return for admission of his son Sebastian into graduate school, with a full-tuition scholarship and a paid professorship. The 20-count indictment includes charges of conspiracy, bribery and wire fraud.

Martinez’s motion, which was introduced Tuesday, says the City Charter allows the council to “suspend any elected officer against whom felony criminal proceedings” have begun.

City Controller Ron Galperin also said this week he would stop Ridley-Thomas’s salary payments and benefits if he is suspended by the council. City Council members earn nearly $224,000 annually.