Tens of thousands of people who fled South Lake Tahoe in the teeth of a wildfire were returning home as crews finally managed to stall the advance of flames scant miles from the resort.

But authorities warned that residents of the scenic forest area on the California-Nevada state line weren’t out of the woods yet, with risks ranging from smoky, foul air to belligerent bears.

Evacuation orders for South Lake Tahoe and other lakeside areas were downgraded to warnings on Sunday afternoon and California Highway Patrol officers began removing roadblocks along State Highway 50 from Nevada to the city limits. 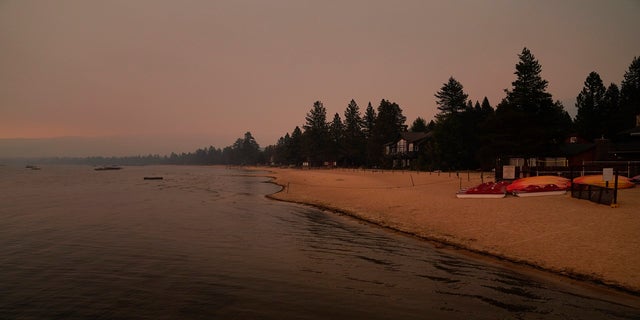 An empty beach is seen on Tuesday, Aug. 31 after a mandatory evacuation was ordered due to the Caldor Fire in South Lake Tahoe, Calif.  (Associated Press)

The threat from the Caldor Fire hasn’t entirely vanished but downgrading to a warning meant those who wish could return to their homes in what had been a smoke-choked ghost town instead of a thriving Labor Day getaway location.

“So far it hasn’t been a mad rush of cars,” South Lake Tahoe Fire Chief Clive Savacool said at an evening briefing. “We’re happy to see that people are slowly trickling in, just because the city does need time to get ready.”

However, he said people with health problems might want to consider staying away because of the smoky air.

People who do return should have enough medication and groceries and a full gas tank in order to be self-sufficient, Savacool said.

Law enforcement was still patrolling so “your home will still be safe,” Savacool said.

LABOR DAY FORECAST: SHOWERS, THUNDERSTORMS COULD APPEAR IN THESE AREAS

However, authorities also warned that in the absence of humans, bears had gone to town, spreading trash everywhere that must be picked up.

“The delicate balance between humans and bears has been upset,” and anyone who thinks a bear may have entered their home should call law enforcement, El Dorado County sheriff’s Sgt. Simon Brown said.

The lifting of mandatory evacuation orders for the Tahoe area marked a milestone in the fight against the fire, which erupted on Aug. 14 and spread across nearly 340 square miles of dense national parks and forests, tree-dotted granite cliffs and scattered cabins and hamlets in the northern Sierra Nevada. 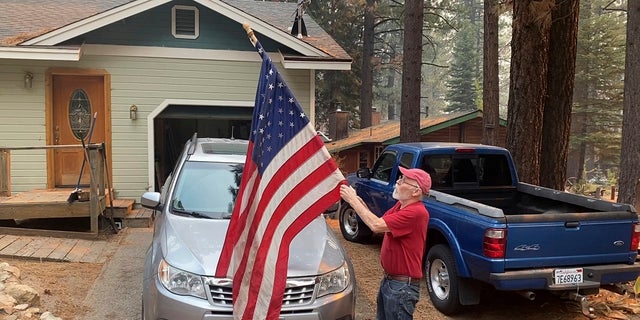 Bill Roberts rolls up an American flag in front of his house in South Lake Tahoe, Calif., last Tuesday — a day after the city was ordered to evacuate because of the approaching Caldor Fire.    (Associated Press)

At its peak, the fire had burned as much as 1,000 acres an hour and last month virtually razed the small community of Grizzly Flats.

But in recent days the winds had eased and thousands of firefighters took advantage of the better weather to hack, burn and bulldoze fire lines, managing to contain 43% of the perimeter.

Most of the western and southern sides of the fire had been corralled, although some areas still were off-limits.

FEMA DIRECTOR CALLS CLIMATE CHANGE THE ‘CRISIS OF OUR GENERATION’

No homes had been lost on the northeastern side of the fire nearest to the lake, and crews managed to carve more fire line along one edge of a fiery finger.

The fire hadn’t made significant progress for days but there were still sections where crews were struggling to expand safe areas and mop up hot spots, allowing evacuation orders there to be lifted.

“We’re up into the wilderness area,” said Jake Cagle, a fire operations section chief. “It’s just a tough piece of ground. We’re in there beating it up. It’s over a two-hour hike to get in there.”

Mandatory evacuation orders on the Nevada side of the state line were lifted Saturday, although Douglas County authorities urged residents to stay alert, saying the fire still has the potential to threaten homes.

California and much of the U.S. West have seen dozens of wildfires in the past two months as the drought-stricken region sweltered under hot, dry weather and winds drove flames through bone-dry vegetation.

No deaths had been reported specifically from the fires. However, authorities said two people assigned to fire-related duties died from illness this week, officials said.

Marcus Pacheco, an assistant fire engine operator for Lassen National Forest with 30 years of experience, died on Thursday. He was assigned to the Dixie Fire burning north of the Caldor Fire, authorities said.

The Dixie Fire began in mid-July in the northern Sierra Nevada and is the second-largest wildfire in recorded state history. It has burned nearly 1,400 square miles in five counties and three national parks and forests, according to Cal Fire.

A retired firefighter who was hired to help with the French Fire died from complications of COVID-19, authorities said. He was identified as Allen Johnson.

The French Fire in Kern County was 52% contained after burning about 41 square miles.

Fire concerns have shut down all national forests in the state.

California has experienced increasingly larger and deadlier wildfires in recent years as climate change has made the West much warmer and drier over the past 30 years. Scientists have said weather will continue to be more extreme and wildfires more frequent, destructive and unpredictable.