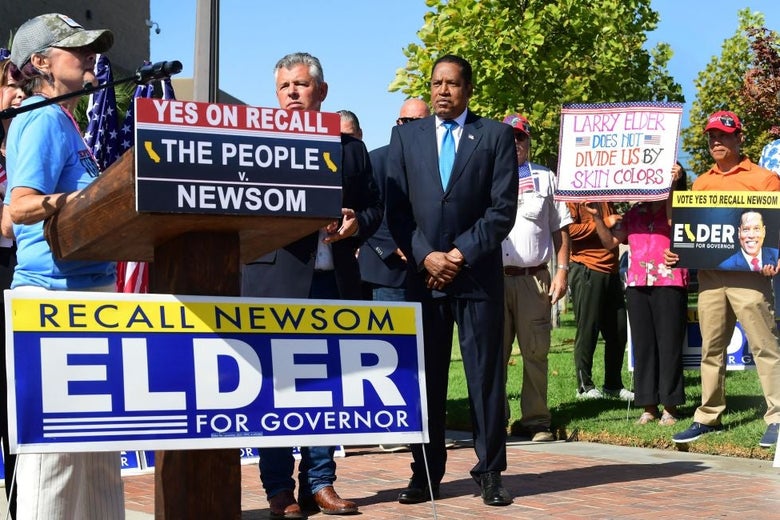 Tuesday is the last day for Californians to vote in the state’s gubernatorial recall election, which incumbent Democrat Gavin Newsom is expected to win. His leading Republican opponent is a conservative talk-show host named Larry Elder who has been endorsed by a number of the party’s most nationally prominent right-wing figures and is campaigning against vaccine mandates. (In July, Elder hosted a self-identified doctor from Texas, “Kathy,” on his radio show. She suggested Bill Gates may be using the vaccine to control minority populations and said that COVID-19 can be treated with, among other things, hydrogen peroxide and the anti-parasitic drug ivermectin.)

On Monday, NBC News noticed that Elder’s campaign website has begun linking to another site funded by his campaign, StopCAFraud, which asserts that fraud has been “detected” in the results of the recall election, which, if you’ll remember from earlier in this post, is not over:

Republican Larry Elder appealed on Monday to his supporters to use an online form to report fraud, which claimed it had “detected fraud” in the “results” of the California recall election “resulting in Governor Gavin Newsom being reinstated as governor.”

You’re reading that right—a website paid for by Newsom’s main competitor says Newsom has won the election and been “reinstated” in a job he never stopped doing:

Statistical analyses used to detect fraud in elections held in 3rd-world nations (such as Russia, Venezuela, and Iran) have detected fraud in California resulting in Governor Gavin Newsom being reinstated as governor. The primary analytical tool used was Benford’s Law and can be readily reproduced.

Benford’s law—it came up a lot in late 2020—is a real statistical idea that can be used to detect potentially fraudulent data sets, but it cannot travel through time to do so in the future. Actual California results will begin coming in at 8 p.m. Pacific time Tuesday, though a winner might not be declared immediately. For now, the state has only released early vote totals by party identification, which, while helpful for prognosticating about the final result, are not the kind of information that could possibly allow one to conclude that Newsom had won his race to remain governor, fraudulently or otherwise.

The claimed purpose of Elder’s new site is to collect signatures for a petition demanding a legal review of the election. Its language implies—albeit in a very confusing, unnecessarily elaborate way—that violence might also be ultimately required:

They say that in America, there are four boxes of liberty. The soapbox, the ballot box, the jury box, and the ammo box. When we vote we exercise our rights as Californians and as Americans to make our voices heard via the ballot box, having listened to others make theirs heard through the soapbox. We trust in our elected officials to safeguard that ballot box, such that its results will truly reflect our will as Californian’s. However, when those officials, either through laziness or incompetence, allow thieves to steal amidst the dead of night and cheat our ballot box, we can no longer rely on its contents. Will we now have to fight the California jury box, in the hope that the final box—the one most akin to Pandora’s – remains closed?

Never open the final box! It’s the one most akin to Pandora’s!

The other key touch of 2021-style Republican politics—in which anyone who knows how things actually work is perceived with suspicion by core voters—on Elder’s new page is that the petition calls for “a special session of the California legislature to investigate and ameliorate the twisted results of this 2021 Recall Election of Governor Gavin Newsom.” In California, special sessions of the Legislature can only be called by the governor.

To review, this document is effectively a letter to Newsom (which probably isn’t actually being sent to him) asking him to call a special session to investigate his own victory in an election that has not yet actually ended.

Ultimately, the explanation for what’s happening is next to a checkbox at the bottom of the page, below a form that asks for the signee’s address, email address, and phone number:

I’d like to receive email marketing and SMS updates from StopCAFraud.com & partners.

So, it’s a fundraising thing.