Amess was speaking to constituents at a Methodist Church on Friday when a man entered and repeatedly stabbed him. He was 69.

Drew, a frequent MSNBC guest whose columns have appeared in The New York Times, The Daily Beast, Vanity Fair and Project Syndicate, took to Twitter amid the breaking news and poked fun at Amess’ name.

“A perfect last name for a pol who’s stabbed at a town meeting. British lawmaker dies after being stabbed multiple times while meeting with constituents, police say David Amess,” Drew wrote in the now-deleted tweet. 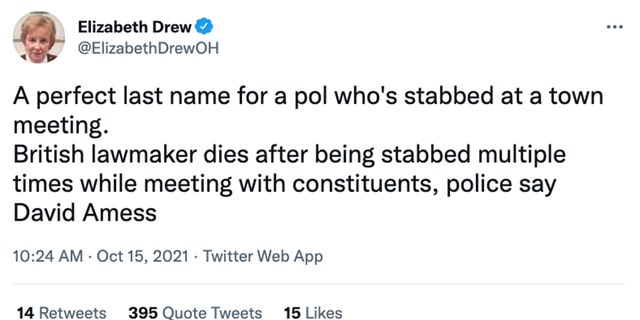 The 85-year-old veteran journalist was torched by critics for writing such a callous tweet.

“Hoping this New Yorker veteran has some millennial doing her tweets, because this is just ghastly. She should take it down,” NewsBusters executive editor Tim Graham reacted.

“Were you always a bad person or did social media help you to get there?” Washington Examiner commentator Becket Adams asked.

“This is sick. Shame on you,” Mediaite writer Jackson Richman scolded Drew.

“You know when you inevitably say ‘my account was hacked’ no one will believe you,” comedian Bennett Arron told the columnist.

Drew, who famously covered the Watergate scandal that led to the ousting of President Richard Nixon, has in recent years been a vocal critic of President Donald Trump. She’s a recurring guest on “The Last Word with Lawrence O’Donnell” and has appeared on several other MSNBC programs.

Amess had been a member of parliament since 1983 and a member of his current constituency – Southend West in Essex – since 1997.

Essex police issued a statement following Amess’ murder saying, “We are not looking for anyone else in connection with the incident and do not believe there is an ongoing threat to the wider public.”