Authored by Ivan Pentchoukov via The Epoch Times,

Jennifer Horn resigned from the Lincoln Project, which she co-founded, on Friday, according to a statement from the organization.

“Upon careful consideration, I have terminated my relationship with the Lincoln Project, effective immediately,” Horn told the New York Times.

Horn resigned amid a scandal surrounding the allegations of sexual harassment made by 21 men against John Weaver, another co-founder.

“John Weaver’s grotesque and inappropriate behavior, coupled with his longstanding deceptions concerning that behavior, are sickening. It is clear at this point that my views about how the Lincoln Project’s efforts are managed, and the best way to move the Lincoln Project forward into the future in the wake of these awful events, have diverged.’’

The organization quickly responded with the following statement:

“Forty-eight hours ago, at a moment when the Lincoln Project was under attack from the Trump organization and their propaganda allies, Jennifer Horn, in written communication, requested from the Lincoln Project an immediate ‘signing bonus’ payment of $250,000 and a $40,000 per month consulting contract,”

“This followed a Christmas Eve communication from Jennifer, where she demanded a board seat from the Lincoln Project, a television show, a podcast hosting assignment, and a staff to manage these endeavors. She also stated her goal was ‘to establish immediate and long-term financial security,’” the statement continued.

“These demands were unanimously rejected by the management committee and board. We immediately accepted Jennifer Horn’s resignation from the Lincoln Project.” 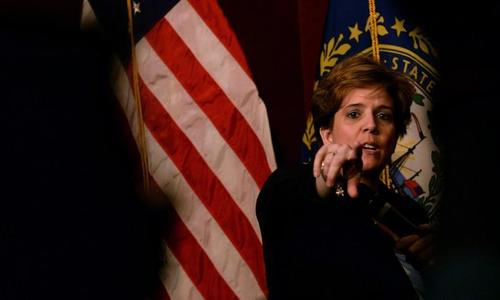 Weaver’s alleged solicitations included messages to a 14-year-old boy which became more pointed after he turned 18. In a statement last month, Weaver admitted to sending “inappropriate” messages and apologized “to the men I made uncomfortable.”

The Lincoln Project is a political action committee run by current and former Republicans. The project endorsed Democrat Joe Biden for president and worked to prevent the reelection of President Donald Trump.

According to the Center for Responsive Politics, The Lincoln Project raised more than $87 million and spent more than $81 million during the 2019-20 election cycle. The group’s aggressive, blunt ads drew the attention of Democrat strategists, who said the Republicans on the project were fighting harder against Trump than some Democrats.

“Let me tell you, the Lincoln group and The Bulwark, these Never Trumper Republicans, the Democrats could learn a lot from them. They’re mean. They fight hard. And we don’t fight like that,” Jame Carville, a Democratic operative, told MSNBC.

Although Horn is leaving the anti-Trump group, she added in her statement to the Times that she would “remain fully committed” to fighting Trumpism.

“I originally joined the Lincoln Project because I recognized Donald Trump as an existential threat to our country and our way of life.”

She said that she “brought my credibility, integrity and professionalism to the Lincoln Project’s efforts every day to defeat Donald Trump and Trumpism.” She said that the success experienced in fighting Trump “is undeniable but also unfinished,” according to the Times.