Via Planet Free Will News,

A new poll shows the American public believes that as government grows more powerful, the less free they become. 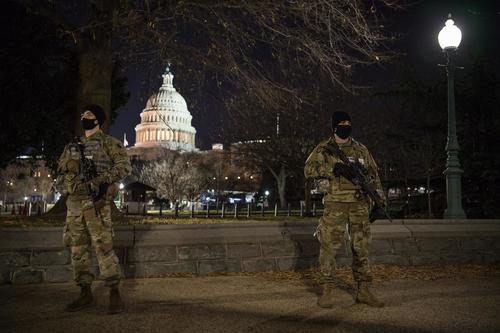 According to a new Just the News Daily Poll with Scott Rasmussen, 63% of Americans say increasing government’s power means individuals will enjoy less freedoms, while only 22% disagree with that proposition.

Meanwhile, 15% of those polled were “not sure.” 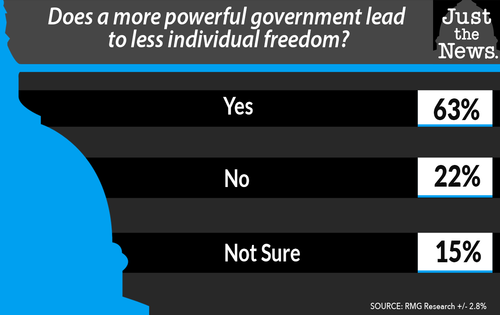 As Just the News reports:

The responses by party affiliation were largely as expected, with a higher percentage of Republicans than Democrats expressing concern about the loss of individual freedom. However, some of the responses appeared unexpected:

Seventy-nine percent of Republicans said more government means less freedom, but a near-majority Democrats – 49% – also had that concern, as did 50% of “somewhat liberal” respondents.

When considering that government growth in the United States is constant – as can be seen with recent calls for expanding terror laws domestically, the Orwellian idea of installing a “reality czar,” and the passage of legislation to form a federal commission to consider racial reparations – the results of the poll are unsurprising, and in fact, a continuation of what appears to be long standing concern amongst Americans.

In 2019, a poll by Harris Poll/Purple Project, which surveyed 2,002 people nationwide, found that 92% of Americans were concerned their rights were being jeopardized. Specifically, Americans were highly concerned with maintaining their freedom of speech, right to bear arms, and ability to receive equal treatment under the law. 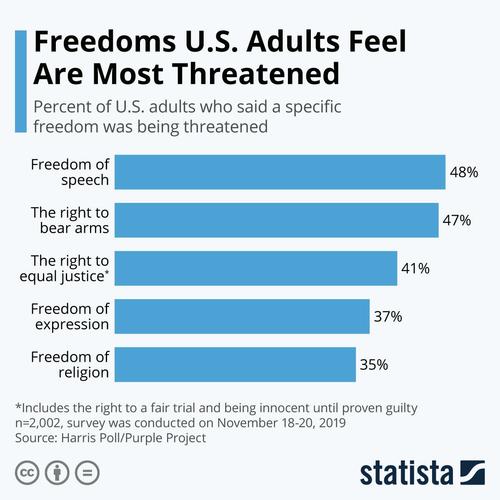 The Harris Poll/Purple Project results came out one week after it was revealed by the Foundation for Individual Rights in Education that at least 6.4 million students at nearly 500 campuses in the U.S. have experienced their freedom of speech being restricted, reports Zero Hedge.

Also in 2019, Reporters Without Borders dropped the U.S. to No. 48 out of 180 on its annual World Press Freedom Index, three ranks lower than the previous year.

“Never before have US journalists been subjected to so many death threats or turned so often to private security firms for protection,” the press freedom watchdog stated.

In 2020, Reporters Without Borders ranked the U.S. 45th on their Press Freedom Index, behind countries such as South Korea, Australia, and Taiwan.

The optics of a militarized police state in Washington D.C. and razor fencing around the Capitol building in 2021 also surely isn’t helping Americans hold on to the belief they live in the most free country in the world …