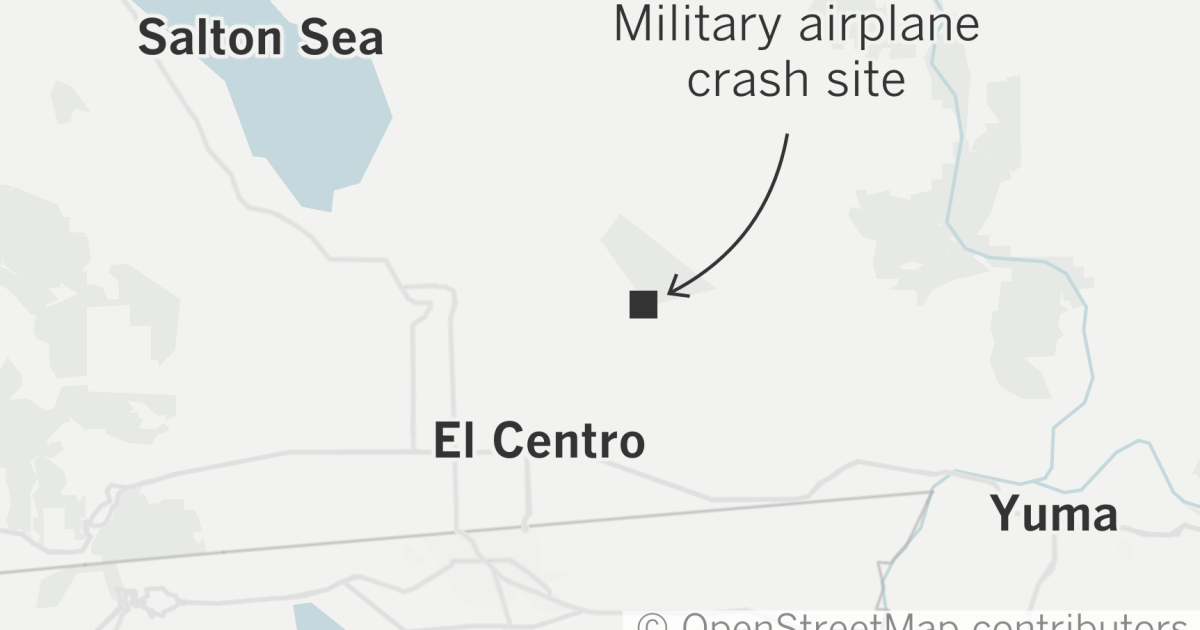 A military aircraft crashed in Imperial County near the Arizona border Wednesday afternoon, killing four people, according to reports.

The crash involved an MV-22B Osprey aircraft, said Cpl. Sarah Marshall, a spokesperson for the 3rd Marine Aircraft Wing, which operated the aircraft. Contrary to reports on social media and early radio calls from the scene by emergency responders, there were no nuclear materials onboard, she said.

The Osprey went down somewhere near the Glamis Dunes, around Coachella Canal Road and Highway 78, according to dispatch reports from emergency responders and Imperial County spokesperson Gil Rebollar.

Although military officials could not say whether there were any fatalities, a federal source who spoke on condition of anonymity said there had been five people aboard the helicopter and four were dead.

The Osprey is a tiltrotor aircraft that can take off and land like a helicopter and fly like an airplane by pivoting its rotors.

Versions of the aircraft are flown by the Marines, Navy and Air Force to transport troops and equipment. The Osprey has a higher top speed and longer range than a helicopter but is able to hover and land in a similar manner.

But the aircraft has a troubled and controversial history.

In March, four North Carolina-based Marines were killed in another Osprey crash during a NATO exercise in Norway.

Wednesday’s fatalities added to at least 46 since the military began testing the unique aircraft, available crash records show. Since the Pentagon made it operational in 2007, there have been eight Osprey crashes.

After an Osprey crashed in the Arabian Sea in 2014, killing its crew chief, Marine Corps investigators concluded in a 183-page report that the aircraft was doomed on takeoff because it was accidentally started in maintenance mode.

During development and testing, the aircraft’s advocates argued that the Osprey would revolutionize warfare because of its tiltrotor capabilities, but it became embroiled in scandal during testing after a series of fatal crashes.

In 2001, the Marine Corps suspended the commander of its MV-22 Osprey training squadron amid allegations that he had urged subordinates to falsify maintenance records, according to reporting by The Times.

The Pentagon’s top testing official said in a November 2000 study that the Osprey had unusually high maintenance needs and suffered from problems that, unless corrected, would make it unreliable and often unavailable for missions.

The study and suspension came after two fatal Osprey crashes in 2000 that marred the controversial aircraft’s record. One crash near New River Marine Corps Air Station in Jacksonville, N.C., on Dec. 11 killed four Marines. Another on April 8 in Arizona killed 19.

Despite strong support from Marine leaders and Congress, the $40-billion program was troubled by four crashes that killed 30 Marines since 1991, The Times reported in January 2001.

The crash near Glamis was also the third military crash with fatalities this month.

Navy Lt. Richard Bullock, assigned to Strike Fighter Squadron (VFA) 113, was killed late Friday when his F/A-18E Super Hornet jet crashed near Trona, Calif., about 250 miles from Naval Air Station Lemoore, where he was based.

That same day, Electronics Technician 2nd Class John Deltoro was killed in a vehicle crash while returning from training at Camp Billy Machen near Niland. The crash involved Deltoro and five other sailors, all of whom were part of a West Coast-based Naval Special Warfare unit.

Two of those sailors suffered critical injuries; two others were listed over the weekend in stable condition, according to the Navy.