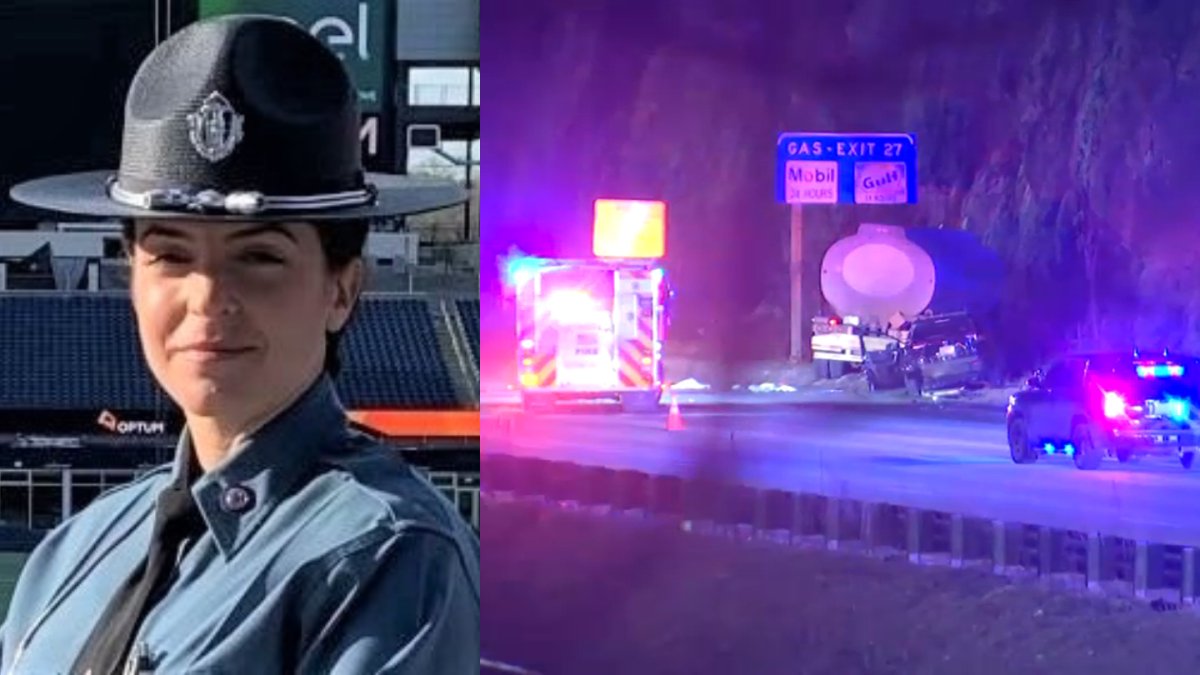 A 34-year-old Massachusetts State Police trooper was killed in a crash with a tractor trailer on I-93 overnight after just under two years of working her “dream” job.

Trooper Tamar Bucci, of Woburn, was struck by a tanker truck around 11:45 p.m. Thursday as she tried to pull over to help a car in the breakdown lane on the northbound side of the highway in Stoneham. The truck was carrying a full load of approximately 10,000 gallons of gasoline, Massachusetts State Police said Friday.

“I can tell you that she will be sorely missed,” Colonel Christopher Mason said during a press conference Friday morning. “She always had a dream and aspiration to be a trooper. She worked very hard during the academy.”

The force of the impact pushed Bucci’s cruiser, a fully marked Ford interceptor SUV with blue lights activated, off of the roadway, authorities said. Two good Samaritans who were driving by stopped and pulled her from the heavily damaged cruiser.

A Stoneham police officer who came upon the scene performed emergency first aid, including CPR, until EMS arrived. The officer was rushed to Massachusetts General Hospital, where she was pronounced dead.

“The department is devastated by our loss,” Mason said. “Her death is a reminder of the dangers that troopers and police officers face each day in order to protect society. While we are heartbroken by this tragedy, we resolve to continue our mission to protect and serve by following the example set by Trooper Bucci. In her brief MSP career, she set an example for all of us to follow. Her life was cut too short, too soon.”

Bucci was assigned to the Medford Barracks last month. She graduated from the State Police Academy on May 6, 2020, the ceremony for which was held at Gillette Stadium.

Before joining the Massachusetts State Police, Bucci worked in the security department at Encore Boston Harbor and also worked as a personal trainer. She graduated from Middlesex Community College and Andover High School.

A state trooper was taken to Massachusetts General Hospital after getting into a serious crash with a tractor trailer on I-93 in Stoneham overnight.

The driver of the truck, a Methuen man, was not injured. Police said he has been cooperative and was interviewed early Friday morning. The truck is owned by PJ Murphy Company. No charges have been filed at this time.

The woman who was in the disabled car that Trooper Bucci was trying to help was taken to an area hospital for evaluation. Police said she has minor injuries and is expected to recover.

It was not immediately clear if the disabled car was struck by the tractor trailer or the trooper’s vehicle. An investigation into the crash is ongoing.

There was an outpouring of support from local police departments and other public safety agencies on Twitter Friday, including the FBI.

“The men and women of FBI Boston offer our deepest condolences to the family, friends, and colleagues of Mass. State Police Trooper Tamar Bucci who was killed in the line of duty. It is a devastating loss and our hearts go out to them,” FBI Boston wrote.

“Our thoughts and prayers are with the family and friends of Trooper Tamar Bucci and the Mass. State Police,” the Boston Fire Department said.

“The Methuen Police Department joins all of Law Enforcement in expressing our most heart felt condolences to the Mass. State Police and all of Trooper Tamar Bucci’s Family and Friends,” Methuen police wrote.

The scene was very active early Friday morning as crews worked to tow the vehicles from the scene. A portion of the highway was closed on the northbound side for some time, causing delays during the morning commute.

No further information was immediately available.