Matt Malone: Why I’m stepping down as editor in chief of America Media 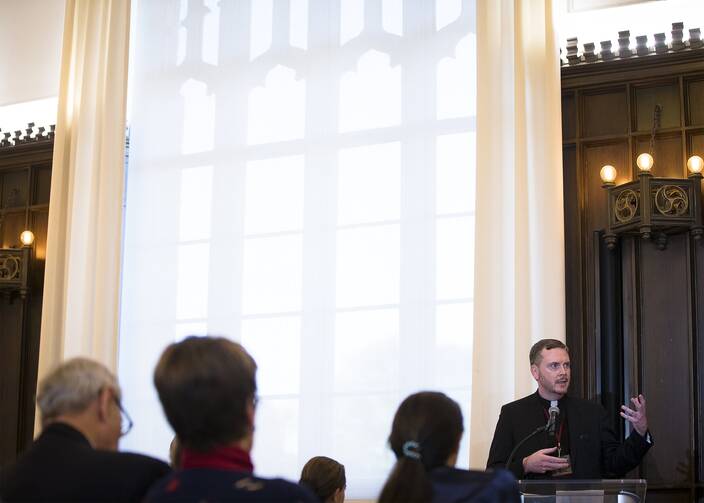 Each morning, as I sit down behind this desk, I discover 13 sets of eyes upon me, the most recent (and in some ways least likely) Jesuit to occupy the office of editor in chief. One of my predecessors, when greeting visitors, would describe these portraits of America’s former editors as a “rogues’ gallery”—his attempt to take some of the pomp out of what is, admittedly, a rather self-important display. When my immediate predecessor, Father Drew Christiansen, joined the group in 2012, the pictures were rearranged to make room for him, with a space set aside for the day when I in turn would vacate this office.

That day is now in sight. Last month, I informed the board of directors of America Media that I will step down as the president and editor in chief at the end of 2022, which will mark the 10th anniversary of my appointment as the 14th editor in chief. Rest assured, there is no story behind this story, only the abiding truth, as Scripture reminds us, that “for everything there is a season, and a time for every purpose under heaven.”

That truth was well known to St. Ignatius Loyola, founder of the Society of Jesus. Long before there were strategic plans and schools of business, St. Ignatius taught that regular turnover in the leadership of an organization is a healthy occurrence. In fact, he enshrined that principle in the Constitutions of the Jesuit order, which still guide us today, by mandating regular turnover in most positions of governance. “There is but one right kind of ambition,” Ignatius wrote, “to love God, and as the reward of loving him, to love him more.”

Rest assured, there is no story behind this story, only the abiding truth, as Scripture reminds us, that “for everything there is a season, and a time for every purpose under heaven.”

By autumn 2022, moreover, we will have met the goals that I set for us a decade ago. In 2012 we launched an ambitious, multiyear initiative to transform America into a media ministry that would meet the challenge of the digital revolution and allow it to lead the conversation about faith and culture in a new century. We announced a strategic plan to change America from a weekly print magazine with little digital presence into a multiplatform media ministry with vital, engaging content well beyond print. This is what you see today.

America grew steadily to achieve that vision. In 2012 we had 16 employees. Today we employ 44. Our online readership is more than 10 times what it was in 2012. We’ve redesigned and relaunched our print and digital editions, launched a video division, built a state-of-the-art headquarters, started a media fellowship for young professionals, rebooted the Catholic Book Club, produced award-winning podcasts and recruited a worldwide network of correspondents and contributing writers. And we have done all of this while maintaining the standard of excellence that is our hallmark, winning the Catholic Media Association magazine of the year award twice in eight years.

As I have written here before, I believe that our founder, John Wynne, S.J., would be proud of us. When he founded America in 1909, he told its readers that because the press of events was so great, he dreamed of a day when America could publish daily. That day is here. We now publish/appear every day, multiple times a day, and even hourly when news is breaking. Our daily newsletter reaches more than 100,000 subscribers every weekday afternoon.

I want you to know that America’s future is secure and the organization is ready for this transition in leadership.

I apologize if that all sounds like bragging. Forgive me. No one would ever describe me as the humblest editor in chief. But I also recount all this because I want you to know that America’s future is secure and the organization is ready for this transition in leadership. This ministry now has the resources to survive and thrive in the years ahead. You should also know that while I have consulted with the board of directors and with my Jesuit superiors, I have reached this decision on my own initiative.

I look forward to continuing to lead America for the next 14 months, working with the incredibly talented team who are the heart of this ministry. I always say that the best part of my job is going to work every day with the hardest-working, most faithful and smartest people in publishing. They are the ones who have truly made this all possible. But they could not have done it without you, the most loyal and generous readers a magazine could be blessed to have. Thank you.

I also look forward to working with my colleagues to recruit the 15th editor in chief, the person whose photo will one day follow mine in this rogues’ gallery above my desk. Most of all, I look forward to learning what God still has planned for his grateful yet unworthy servant.