While it won’t be exactly news to those who followed Microstrategy’s latest convertible bond issuance whose “uses of funds” were quite explicitly stated, moments ago the “business intelligence company” which has since pivoted to a full-blown publicly traded bitcoin proxy announced that it had purchased an additional approximately 19,452 bitcoins for approximately $1.026 billion in cash at an average price of approximately $52,765 per bitcoin, inclusive of fees and expenses.

This means that the bulk of the purchases probably took place on Monday when Bitcoin was trading in that price range. 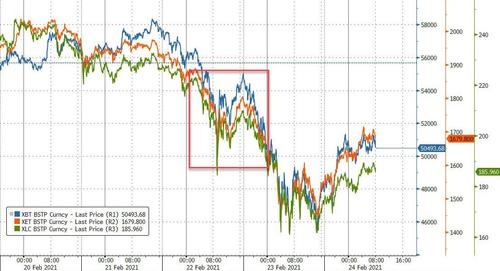 “The Company remains focused on our two corporate strategies of growing our enterprise analytics software business and acquiring and holding bitcoin,” said Michael J. Saylor, CEO, MicroStrategy Incorporated. “The company now holds over 90,000 bitcoins, reaffirming our belief that bitcoin, as the world’s most widely-adopted cryptocurrency, can serve as a dependable store of value. We will continue to pursue our strategy of acquiring bitcoin with excess cash and we may from time to time, subject to market conditions, issue debt or equity securities in capital raising transactions with the objective of using the proceeds to purchase additional bitcoin.”