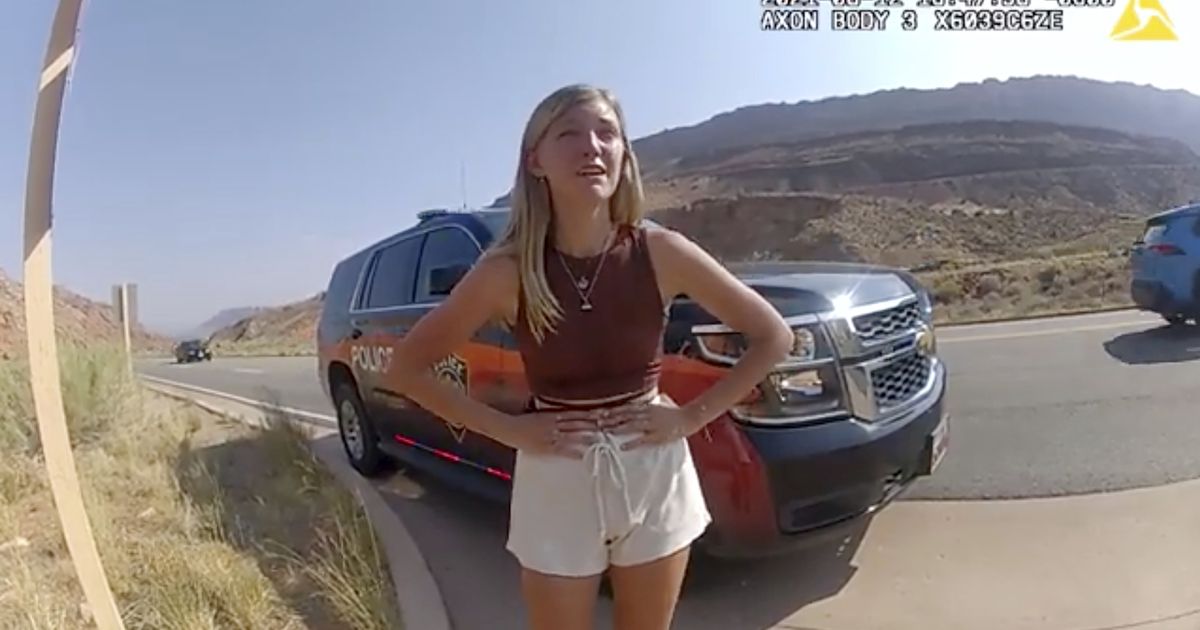 Moab police released body camera footage Thursday that shows an interaction between Gabrielle “Gabby” Petito, her fiance Brian Laundrie and officers there in August, about a month before she was reported missing.

The couple had been traveling on a monthslong, cross-country road trip when they were pulled over near Arches National Park on Aug. 12. The traffic stop came after a witness reported a “domestic problem” to Moab police that day involving the couple that was later categorized as a disorderly conduct incident, records show.

Petito was reported missing Saturday. She was last seen at Grand Teton National Park in Wyoming after checking out of a Salt Lake City hotel on Aug. 24. Laundrie has been named a person of interest in her disappearance, according to authorities in North Port, Florida, where the couple lived before embarking on their trip.

The Moab footage captures an officer pulling over the couple’s camper van near Arches. The vehicle was going 45mph in a 15mph zone, the officer notes.

The footage shows Petito crying as Moab officer Daniel Robbins approaches the van. When asked why she was crying, Petito responded, “I’m crying because we’ve been fighting — some personal issues.”

Laundrie interrupted her from the driver’s seat, telling Robbins that they had had a long day camping the day prior. Robbins asks Petito to step out of the van, then asks why the two had been fighting.

“Some days I have really bad [obsessive-compulsive disorder],” Petito told Robbins through tears. “I was just cleaning and straightening up the back of the van before, and I was apologizing to him and saying ‘I’m sorry I’m so mean.’”

‘He really stresses me out’

According to a report that Moab police released Wednesday, the “domestic problem” reported between the couple Aug. 12 unfolded near Moonflower Community Cooperative, a food cooperative in Moab. A witness told police that it appeared that the couple had an argument over a phone and altercation near their van.

Petito and Laundrie had left the scene by the time police arrived. Laundrie later told Robbins that the argument had started over small things, noting that the van was disorganized and that they were leaving later than expected. Petito said Laundrie locked her out of the van because she “needed to calm down.”

“He really stresses me out,” she told officers.

Petito told the officer that she also was stressed that morning because she “was doing a lot of work on her computer.” She had started a blog and YouTube channel called Nomadic Statik after quitting her job as a nutritionist to embark on their trip, she told police.

“Building my website has been really stressful, and he doesn’t believe that I can do any of it, so that’s kind of been like a… He’s just kind of a downer,” Petito said, speaking of Laundrie.

Robbins then asked Petito to sit in the back of a patrol car while he spoke with Laundrie separately. Officers quickly noted scratches on Laundrie’s face and arm. Laundrie told police that Petito had tried to slap him during their argument at Moonflower and that he pushed her away. Laundrie then locked himself in the car to try and “take a breather,” he said, but Petito attempted to climb into the driver’s seat of the van, according to the report Moab police released.

“She gets worked up sometimes,” Laundrie said in the body camera footage, “and I try and really distance myself from her, so I locked the car and I walked away from her.”

Petito told police that Laundrie had grabbed her face during their argument. Another officer asked Petito if Laundrie is usually patient with her. She said that he gets frustrated a lot.

Officers concluded that Petito was the primary aggressor in the situation and informed her that she could face domestic violence charges. Instead, police decided to separate the couple for the night, driving Laundrie to a hotel and leaving Petito with the camper van so they could “relax their emotions,” records state.

Robbins later wrote in a report that he did not believe the situation “escalated to the level of a domestic assault as much as that of a mental health crisis,” records show.

“I want you guys both to be away from each other,” Robbins told Petito in the body camera footage. “Relax, breathe… I understand this can feel like it’s a nightmare, but you’re coming out as the golden flower on top of it all.”

As Robbins took Laundrie to a hotel in town, Laundrie told him about their plans to visit one of Petito’s grandmother’s friends in Oregon after they left Moab.

Laundrie returned to Florida alone on Sept. 1 in the same van that Petito and him had been traveling in, according to North Port police. Police there said he has refused to speak with investigators about Petito’s disappearance.

When Robbins dropped Laundrie off at the Moab hotel Aug. 12, he told Laundrie that the time apart would “make a big difference in your guys’ next couple weeks at the very least,” the footage shows.

Authorities in North Port are investigating a possible link between missing woman Petito’s disappearance and the deaths of two women killed in Moab last month. There is no evidence as of Thursday that the cases are connected. But North Port Police Chief Todd Garrison said during a news conference early Thursday that investigators there “have communication going back and forth with the Grand County Sheriff’s Office.”

“We provided them with whatever information we could,” Garrison said. “They don’t have any [murder] suspect information right now. … They told us that they’re looking at everything at this point.”