On February 12, a mysterious weapon knocked out a battle tank of the Syrian Arab Army (SAA) in the southern Idlib countryside. 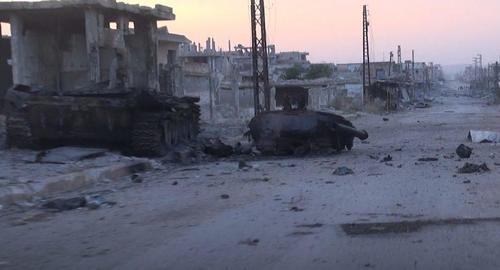 The battle tank blew up in the early morning hours after being hit with an unknown object. The battle tank was situated south of the government-held town of Ma`arat al-Nu`man, way behind the frontline.

Opposition sources reported the incident, with some claiming that the battle tank was hit with an artillery round fired by Greater Idlib militants.

However, this high-level of accuracy is nearly impossible to achieve with unguided artillery rounds. The battle tank was also situated beyond the militants’ line of sight.

The battle tank may have been targeted by one of the Turkish combat drones which operate over Greater Idlib on a regular basis. Another possibility is that the battle tank was struck with a laser-guided artillery shell or rocket, after being illuminated by a Turkish drone.

Last year, Turkey’s ROKETSA revealed its TRLG-230 laser-guided rocket system. The system was successfully deployed against Armenian forces during the 2020 Nagorno-Karabakh war. The Syrian battle tank may have been struck with the TRLG-230 or a similar system.

The Turkish military maintains more than 60 posts, camps and bases throughout Greater Idlib. Heavy weapons, similar to the TRLG-230, are deployed in most of these positions.

In any case, the strike represents a serious escalation by Turkey and a violation of the agreement signed with Russian on March 5, 2020. Ankara forces engaged in a fierce confrontation with the SAA and its allies last year to stop them from neutralizing the remaining terrorist groups in Greater Idlib.

Previous post: [ White House refuses to say whether Israel is a U.S. ally in latest Biden disaster ]
Next post: [ A Day In The Life Of A Brewery Being Crushed By LA’s Ever-Shifting COVID Rules ]