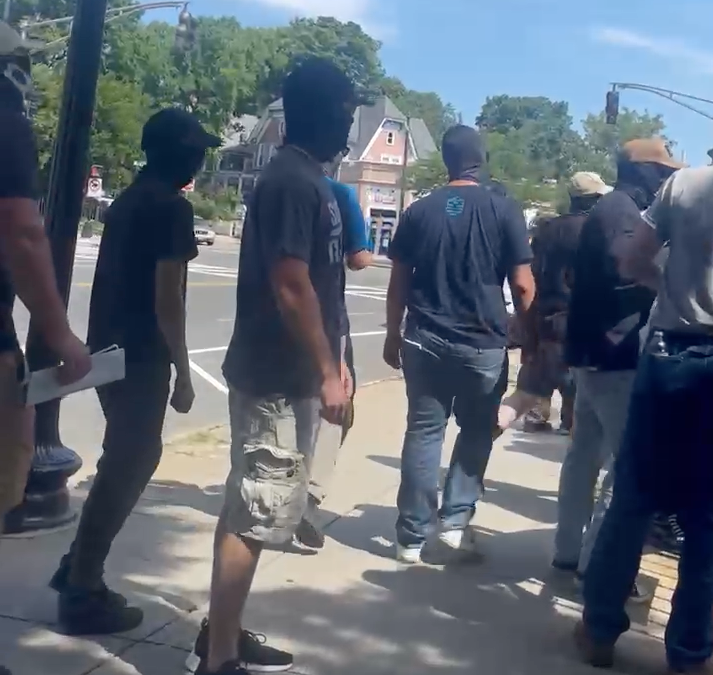 Apparent members of the group, whose name is reminiscent of the original Nazi party’s full name, gathered wearing face masks near the Civil War memorial, and began chanting “off our streets.”

According to Suffolk District Attorney Kevin Hayden, a book reading event was occurring in the area where Saturday’s protest began.

“It is clear that Boston is a way point in the crusade of hate launched five years ago in Charlottesville,” Hayden said in a written statement. “The presence of white supremacists at a Jamaica Plain book reading today, like their downtown march earlier this month, is at once a disgrace and a warning.”

Boston Police officers were present to monitor the protest. Witness video showed Chris Hood, the 23-year-old founder of the group from Pepperell, Mass., being taken away by Boston Police in handcuffs.

Per the Suffolk District Attorney’s Office, three arrests have been made at the rally, including Hood. Two counter protesters were also arrested, including 21-year-old Tobias Walker and 27-year-old Seth Rosenau, both of Jamaica Plain. Both were charged with disturbing the peace; in addition, Walker was charged with disorderly conduct and intent to commit a crime while Rosenau was charged with affray. It is unclear if any of the arrestees have an attorney.

Hood and Rosenau were fighting, according to Boston Police.

“It’s no coincidence that these cowardly groups from outside our city continue to target Boston as we showcase how representative leadership, empowered communities, and bold policies can have immediate impact,” Wu said. “We are prepared and will not be intimidated in our work to make Boston a city for everyone. We remain ready for citywide deployment of extra public safety resources with a zero tolerance approach to any groups looking to intimidate or harass residents in our city.”

Ricardo Arroyo, a City Councilor from District 5, said that his community stands united against hate.

“We are proud of our diverse communities here in Boston and our LGBTQ+ residents are loved here,” Arroyo said. “Cowards who attempt to make our residents afraid and alone will never succeed.”

Attorney General Maura Healey, a Democratic candidate for governor of Massachusetts, issued a tweet in response to the rally.