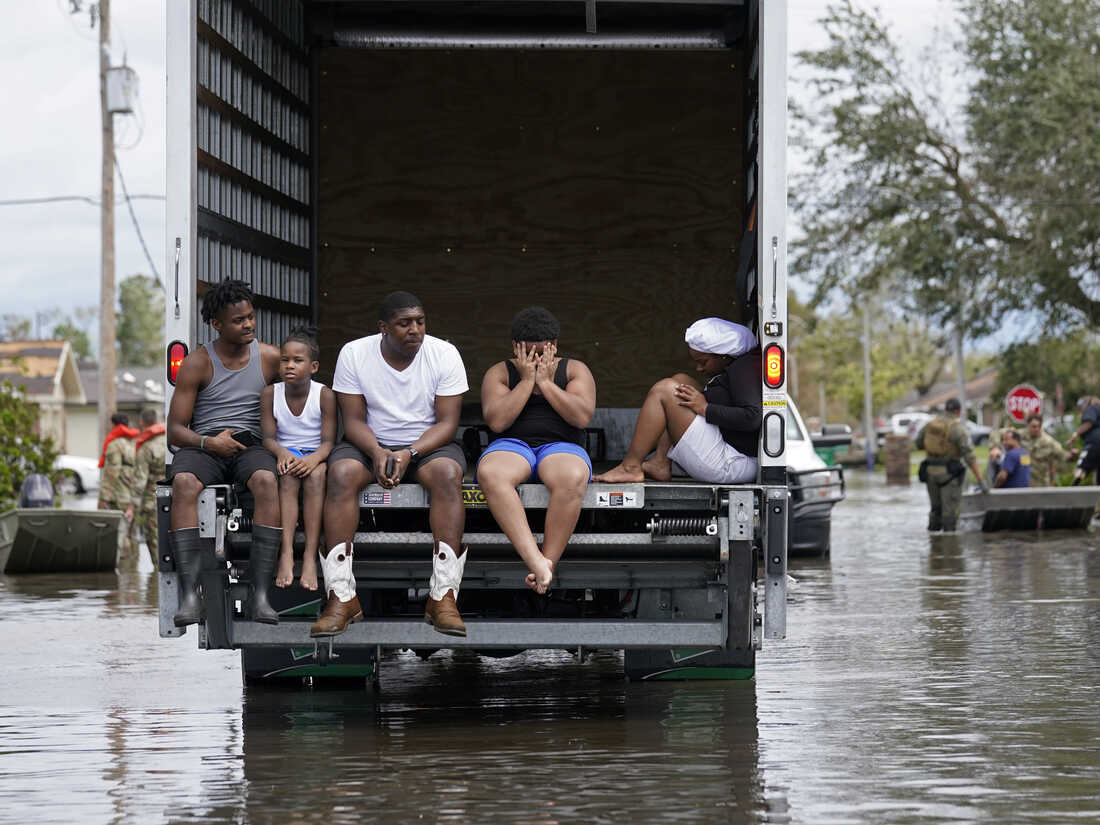 People are evacuated from floodwaters in the aftermath of Hurricane Ida in LaPlace, La., on Monday. Gerald Herbert/AP hide caption 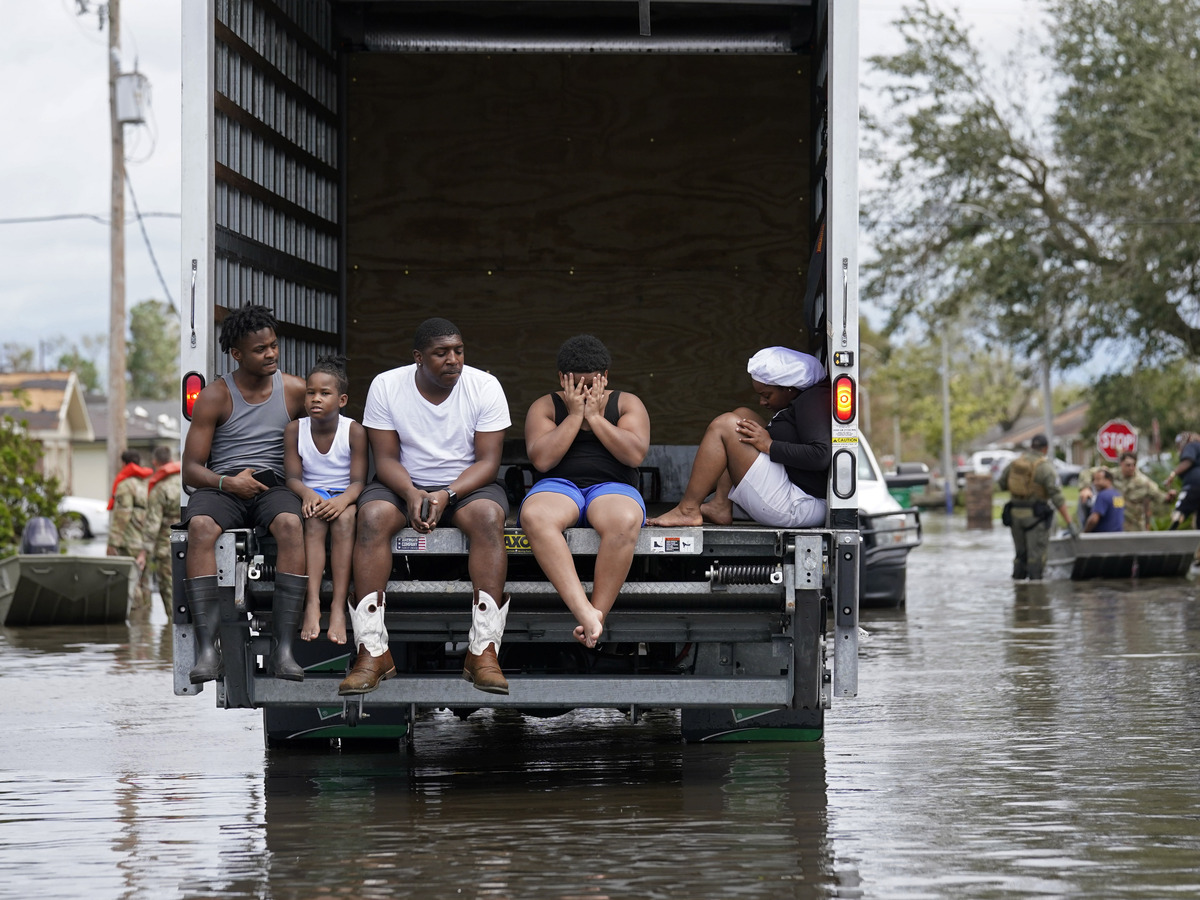 People are evacuated from floodwaters in the aftermath of Hurricane Ida in LaPlace, La., on Monday.

NEW ORLEANS — The levees, floodwalls and floodgates that protect New Orleans held up against Hurricane Ida’s fury, passing their toughest test since the federal government spent billions of dollars to upgrade a system that catastrophically failed when Hurricane Katrina struck 16 years ago.

But strengthening the flood protection system in New Orleans couldn’t spare some neighboring communities from Ida’s destructive storm surge. Many residents of LaPlace, a western suburb where work only recently began on a long-awaited levee project, had to be rescued from rising floodwaters.

Marcie Jacob Hebert evacuated before Ida, but she has no doubt that the storm flooded her LaPlace home based on what she has seen and heard from neighbors. Her house didn’t flood in 2005 during Katrina, but it took on nearly 2 feet (60 centimeters) of water during Hurricane Isaac in 2012.

“We haven’t had these problems until everybody else’s levees worked,” said Hebert, 46. “It may not be the only factor, but I sure do think it contributes.”

Louisiana State University professor emeritus Craig Colten, who has taught historical geography, said most of the New Orleans levee systems has been in place for decades. He said the flooding in LaPlace can be explained by wind direction, not by any floodwater diverted from New Orleans.

“Isaac was really a minor storm in terms of wind speed, but it did drive water into Lake Pontchartrain to the western edge, toward LaPlace, as this storm did. And that just is going to pile water up where LaPlace is,” Colten said. “I haven’t seen anything that was done since Katrina that’s really going to make a huge difference.” 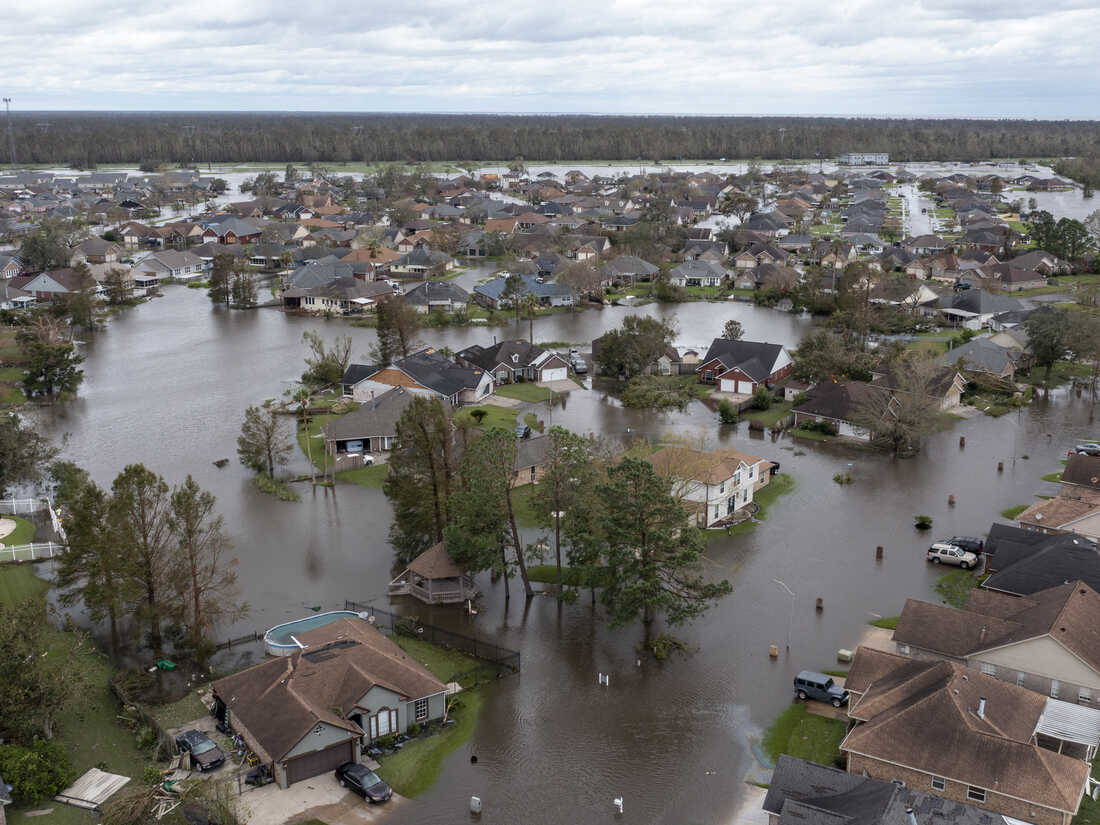 Flooded streets and homes are shown in the Spring Meadow subdivision in LaPlace, La., after Hurricane Ida moved through on Monday. Steve Helber/AP hide caption 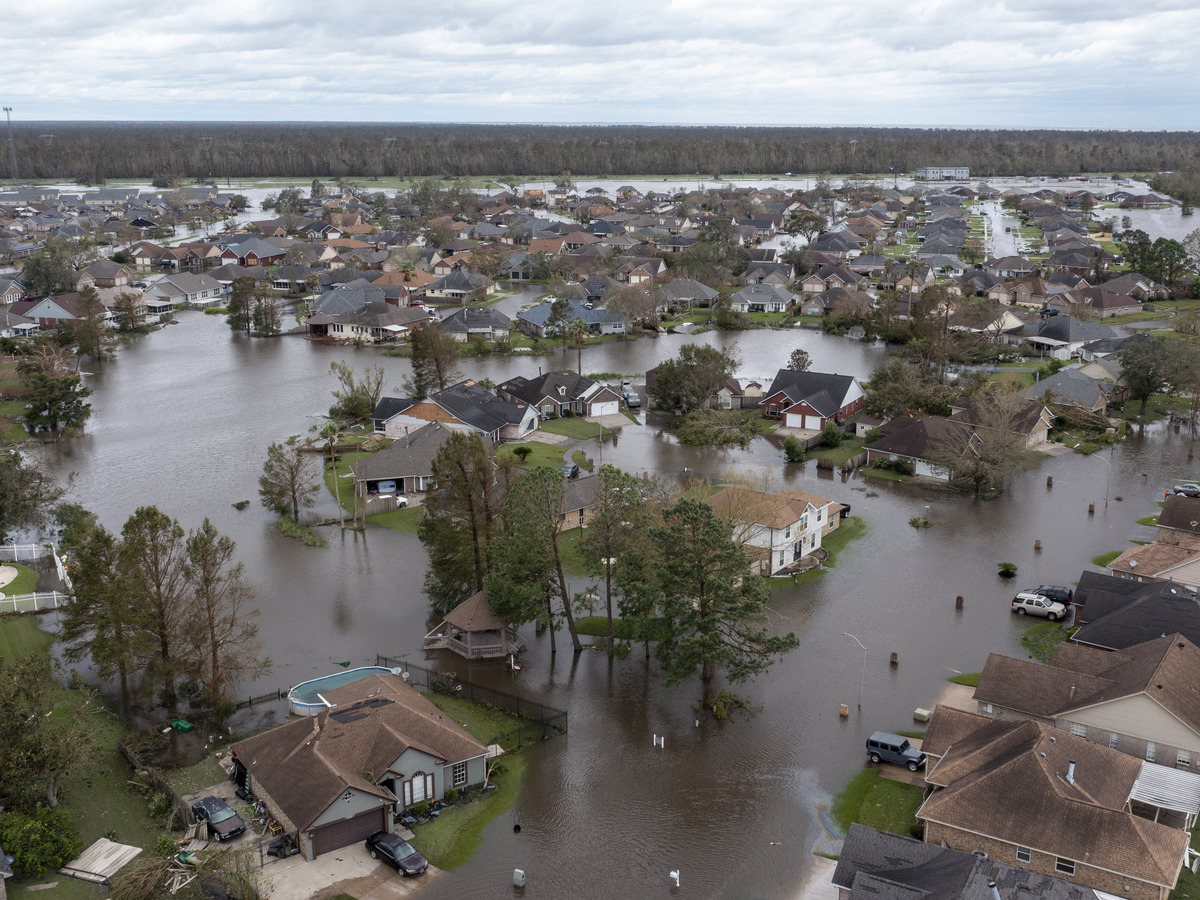 Flooded streets and homes are shown in the Spring Meadow subdivision in LaPlace, La., after Hurricane Ida moved through on Monday.

Gov. John Bel Edwards said a preliminary survey of levees across Louisiana showed they did exactly as they intended and held water out.

“We don’t believe there is a single levee anywhere now that actually breached or failed. There were a few smaller levees that were overtopped to a degree for a certain period of time,” Edwards said.

Two flood protection districts oversee the system in Orleans, Jefferson and St. Bernard parishes. Neither district reported any breaches or overtopping of levees.

The Southeast Louisiana Flood Protection Authority-East, which covers St. Bernard Parish and most of Orleans and Jefferson parishes, also planned to inspect its system Monday but hadn’t found any problems, according to regional director Kelli Chandler.

Tulane University history professor Andy Horowitz, author of “Katrina: A History, ​1915-2015,” said it is “unequivocally great news” that the levees held up against Ida’s surge. That doesn’t mean that a city as vulnerable as New Orleans is safe from flooding “in the face of a changing climate,” he added

“It does not mean that the lesson of Hurricane Ida is that metropolitan New Orleans has adequate hurricane protection. It means it had adequate protection against this storm surge,” Horowitz said. “As the system is challenged by stronger and more frequent hurricanes. I think many experts are very concerned about the rather low level of protection that New Orleans has.” 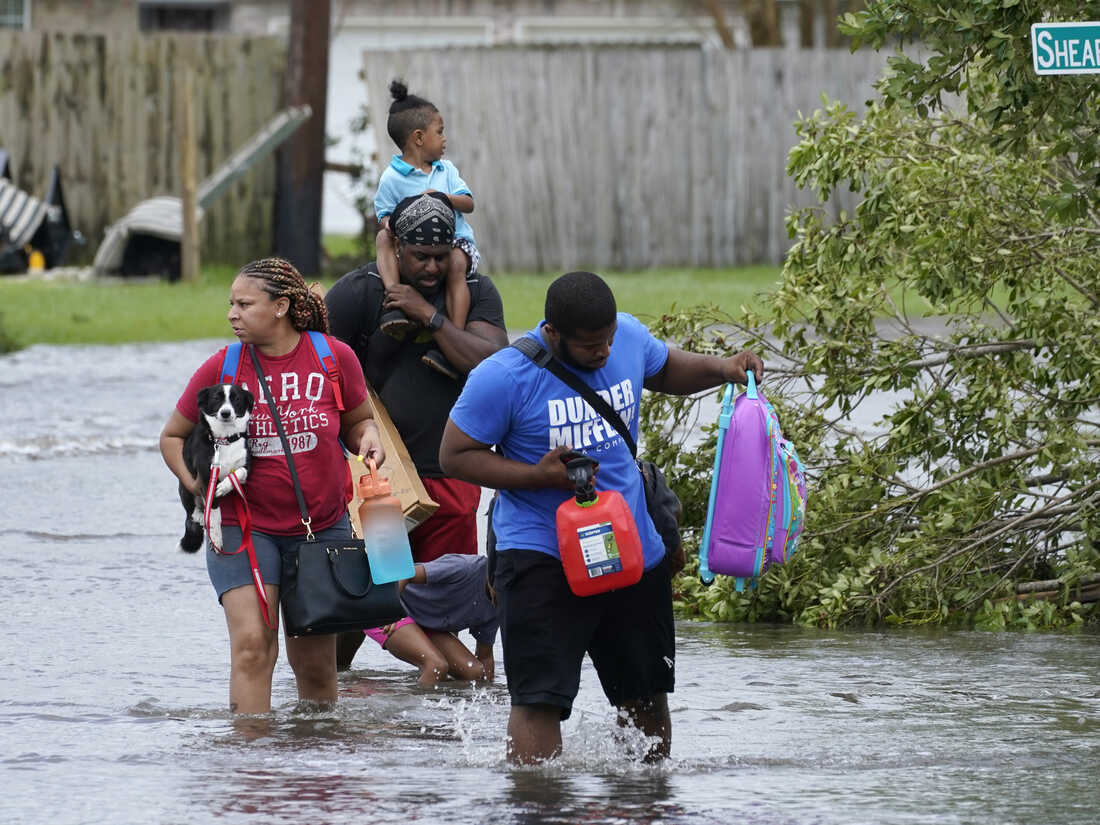 Residents walk in a flooded neighborhood after Hurricane Ida moved through on Monday in LaPlace, La. Steve Helber/AP hide caption 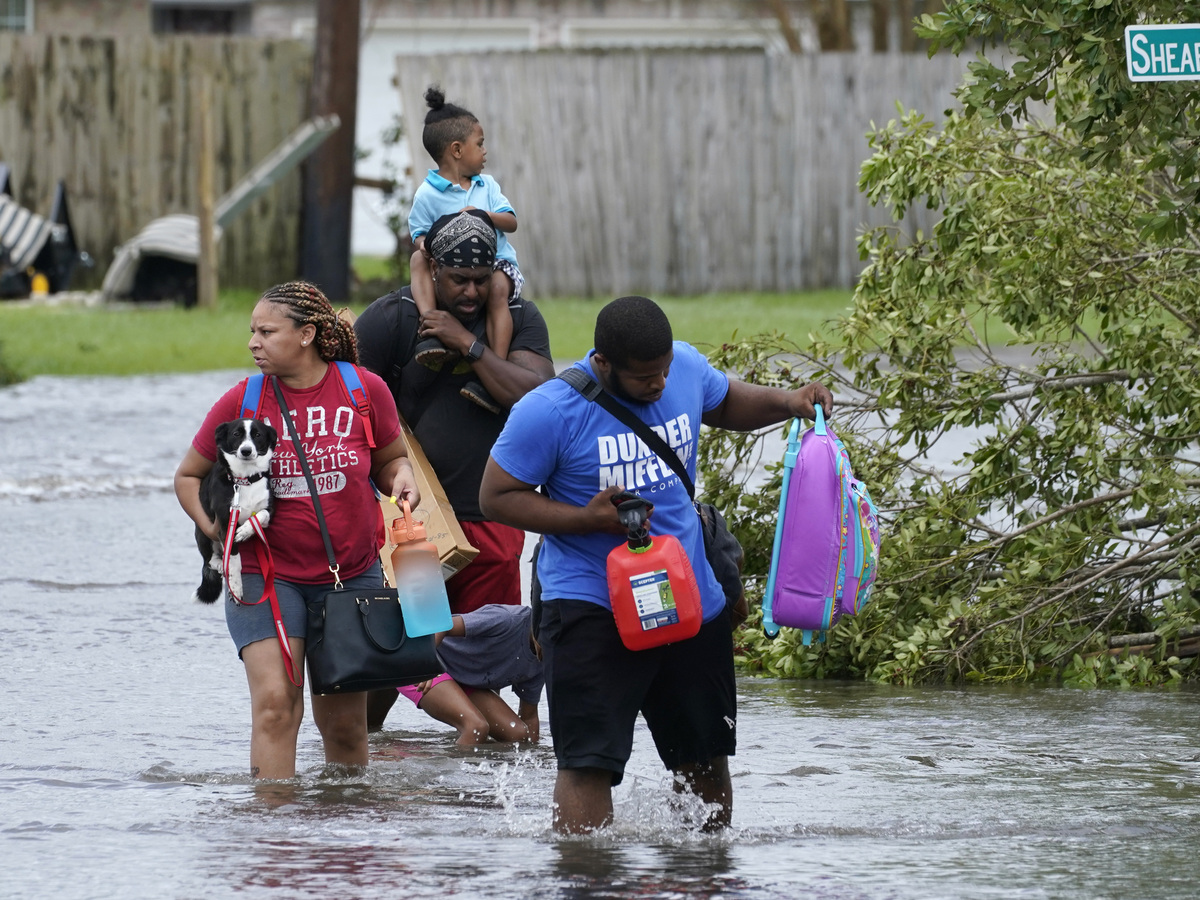 Residents walk in a flooded neighborhood after Hurricane Ida moved through on Monday in LaPlace, La.

A federal judge in New Orleans ruled in 2009 that the U.S. Army Corps of Engineers’ failure to properly maintain and operate the Mississippi River-Gulf Outlet was a significant cause of the catastrophic flooding during Katrina. Levee failures near Lake Pontchartrain also flooded New Orleans neighborhoods.

After Katrina, the federal government spent $14.5 billion on projects designed to enhance protection from storm surge and flooding in New Orleans and surrounding suburbs south of Lake Pontchartrain. Starting with a giant surge barrier east of the city, the system is a 130-mile (210-kilometer) ring built to hold out storm surge of about 30 feet (9 meters).

Work recently began on a levee project to protect tens of thousands of residents of LaPlace and other communities outside New Orleans’ levee system. That project is not projected to be completed until 2024.

“I’m glad they’re building us a levee, but I worry about what happens to the next group further to the west,” Hebert said. “The water has got to go somewhere. We can’t just keep funneling it from person to person, place to place.”

Bernardo Fallas, a spokesperson for Phillips 66, said the company did not immediately have information about whether a reported levee collapse in Plaquemines Parish affected its Alliance Refinery in Belle Chasse. Fallas said the refinery has been shut down since Saturday, ahead of Ida’s arrival.

“We will proceed to conduct a post-storm assessment of the refinery when it is safe to do so,” Fallas said.