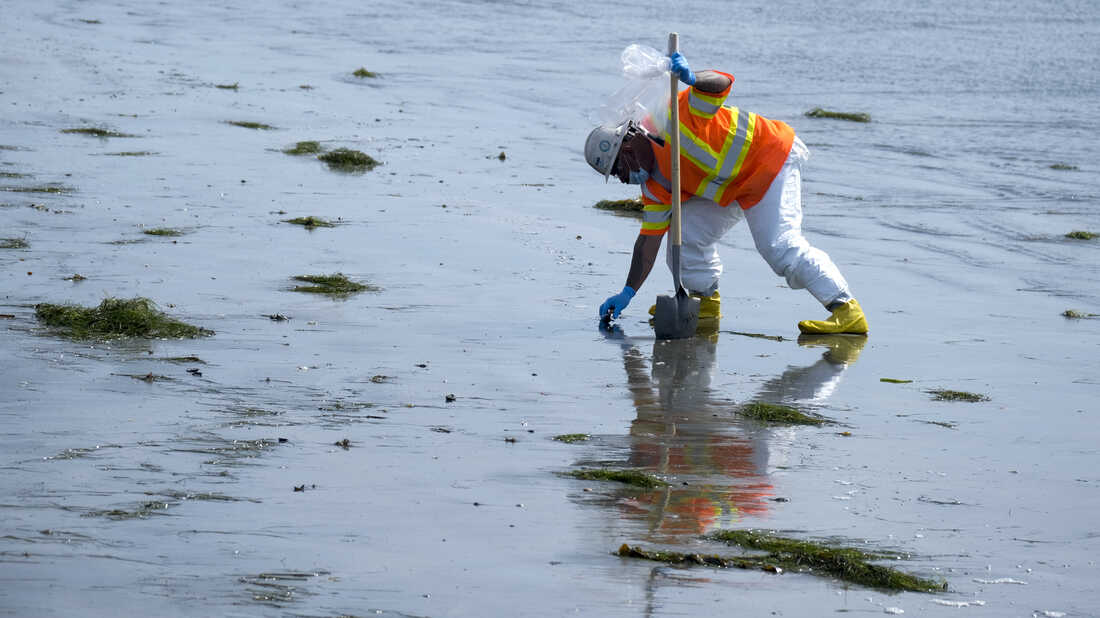 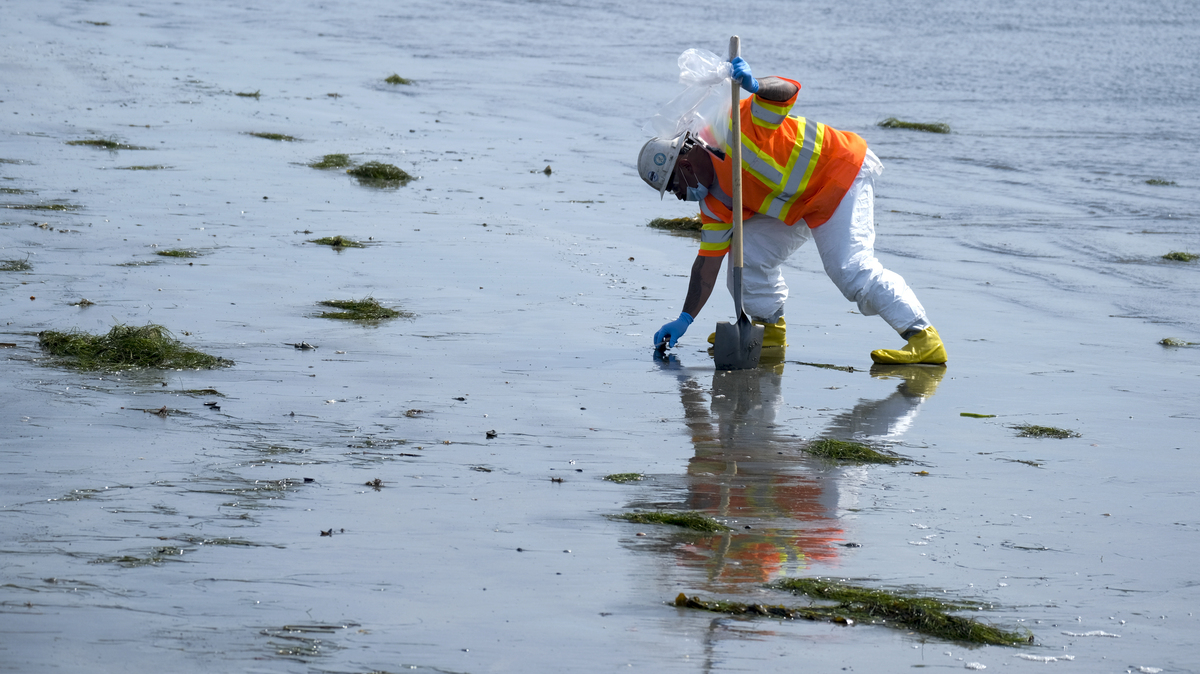 HUNTINGTON BEACH, Calif. — A Southern California underwater oil pipeline was likely struck by an anchor several months to a year before a leak spilled tens of thousands of gallons of crude, the U.S. Coast Guard announced Friday.

A large vessel of some kind may have struck the massive pipeline, shattering the concrete casing but not necessarily causing the slender crack from which oil spewed last weekend, said Capt. Jason Neubauer, chief of the Coast Guard’s office of investigation and analysis.

The longer timeline was partly based on marine growth that was spotted on the pipe in an underwater survey.

The pipe, which was found to be intact last October, may also have been struck several other times by other ships’ anchors over the course of the period, he added.

No ships have been identified, however.

“We’re going to be looking at every vessel movement over that pipeline, and every close encroachment from the anchor just for the entire course of the year,” the captain said.

The pipeline was dragged along the sea floor as much as 105 feet, Neubauer said.

That indicates a large vessel was involved, he said. Cargo ships with multiton anchors routinely move through the area from the ports of Los Angeles and Long Beach. 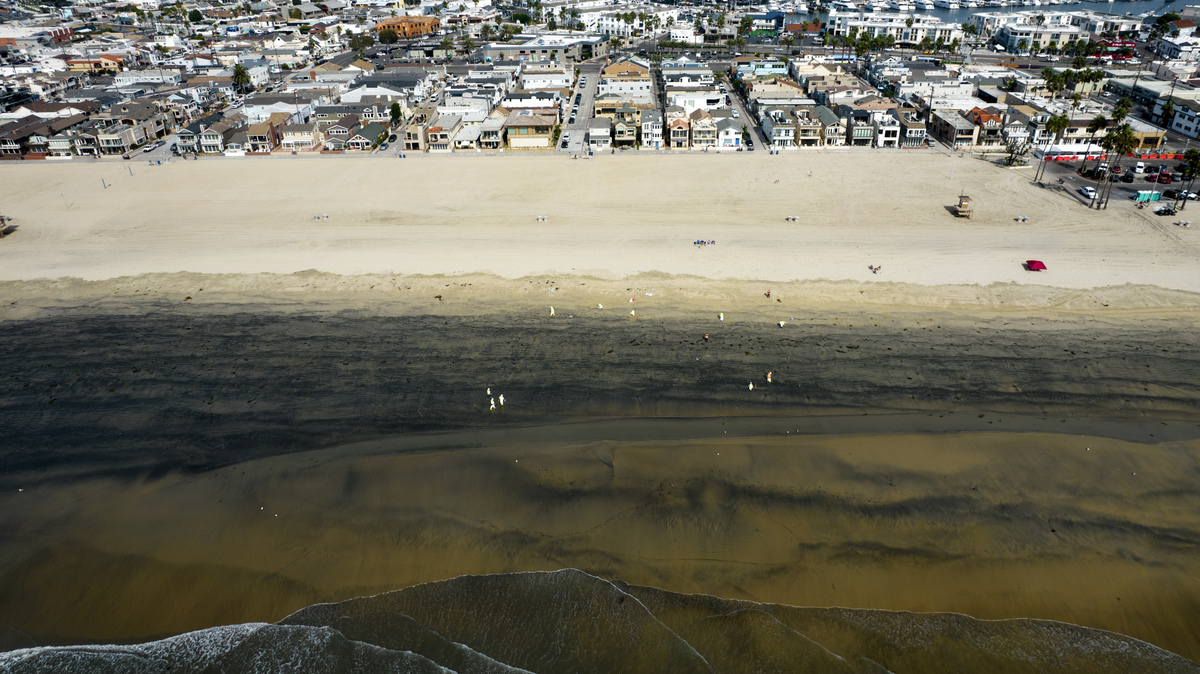 The oil spill as seen in Newport Beach, Calif., this week.

At least 17 accidents on pipelines carrying crude oil or other hazardous liquids have been linked to anchor strikes or suspected anchor strikes since 1986, according to an Associated Press review of more than 10,000 reports submitted to federal regulators.

According to federal records, in some cases an anchor strike is never conclusively proven, such as 2012 leak from an ExxonMobil pipeline in Louisiana’s shallow Barataria Bay, where a direct strike by a barge or other boat also were considered possibilities.

In others the evidence of an anchor strike was obvious. During 1992’s Hurricane Andrew, a 30,000-pound anchor was dragged by a drifting drilling rig over a Texaco pipeline in the Gulf of Mexico, causing a dent that broke open when the line was later re-started.

A Coast Guard video released Thursday appears to show a trench in the sandy seafloor leading to a bend in the submerged line, but experts offered varied opinions of the significance of the brief, grainy shots. An earlier video showcased a thin, 13-inch long rupture in the line.

Robert Bea, an engineering professor at the University of California, Berkeley and former Shell Oil engineer, said the second video appears to show a furrow in the seabed created by a dragging anchor leading to the damaged pipeline.

Investigators, however, are expected to consider other forces that could have moved and damaged the pipe, including water currents of movement in the seabed.

It will take time.

“The results from the analyses need to be validated — corroborated. This process can bring even more questions,” Bea said. “The shape of the crack indicates that it was caused by internal pressures in the pipeline. But, if that is true, why didn’t the pipeline leak” earlier?

Frank G. Adams, president of Houston-based Interface Consulting International, said in an email that the slight bow in the line displayed in one video “doesn’t necessarily look like anchor damage.”

When a pipeline is hit by an anchor or other heavy object “that typically results in physical damage that may lead to a fracture,” he said.

Reports of a possible spill off Huntington Beach were first coming out Friday evening but the leak wasn’t discovered until Saturday morning. While the size of the spill isn’t known, the Coast Guard on Thursday slightly revised the parameters of the estimates to at least about 25,000 gallons and no more than 132,000 gallons.

The Coast Guard said about 5,500 gallons of crude have been recovered from the ocean. The oil has spread southeast along the coast with reports of small amounts coming ashore in San Diego County, some 50 miles from the original site.

Local health officials said Friday that air samples from areas where oil potentially spread are within background levels — in other words, similar to air quality on a typical day — and below California health standards for the pollutants that were measured.

So far the impact on wildfire has been minimal — 10 dead birds and another 25 recovered alive and treated — but environmentalists caution the long-term impacts could be much greater. As cleanup continued on the shore, some beaches in Laguna Beach reopened Friday, though the public still can’t go in the water.

Investigators are trying to determine what happened in the crucial early hours after reports of a possible oil spill first came in.

The narrow gash seen in one video could explain why signs of an oil slick were seen Friday night, but the spill eluded detection by the pipeline operator for more than 12 hours.

“My experience suggests this would be a darned hard leak to remotely determine quickly,” said Richard Kuprewicz, a private pipeline accident investigator and consultant. “An opening of this type, on a 17-mile-long underwater pipe is very hard to spot by remote indications. These crack-type releases are lower rate and can go for quite a while.”

When pipes experience a catastrophic failure, the breach typically is much bigger, what’s referred to in the industry as a “fish mouth” rupture because it gapes wide like the mouth of a fish, he said.

Amplify Energy, a Houston-based company that owns and operates three offshore oil platforms and the pipeline south of Los Angeles, said it didn’t know there had been a spill until its workers detected an oil sheen on the water Saturday at 8:09 a.m.

The leak occurred about 5 miles offshore at a depth of about 98 feet, investigators said. A 4,000-foot section of the pipeline was dislodged 105 feet , bent back like the string on a bow, Amplify’s CEO Martyn Willsher has said.

Jonathan Stewart, a professor of civil and environmental engineering at the University of California, Los Angeles, said moving a large section of pipe that far would have caused “bending deformations” – tension on the side that was stretched into a semicircle, with compression on the other, as it was bent inward, Stewart said.

It’s possible such pressure alone could result in a break, though Stewart said there is too little information to make a conclusion about the cause. It’s possible a sharp section of anchor could pierce the pipeline but “you could still have damage just from the bending.”

“Because it’s pulling on the pipe, you create these bending stresses in the pipe, which could eventually become large enough that they rupture it,” he said.

Questions also remain about when the oil company knew it had a problem and a potential delay in reporting the spill.

A foreign ship anchored in the waters off Huntington Beach reported to the Coast Guard that it saw a sheen longer than 2 miles just after 6 p.m. on Oct. 1, and that evening a satellite image from the European Space Agency also indicated a likely oil slick, which was reported to the Coast Guard at 2:06 a.m. Saturday, after being reviewed by a National Oceanic and Atmospheric Administration analyst.

Federal pipeline safety regulators have put the time of the incident at 2:30 a.m. Saturday but say the company didn’t shut down the pipeline until 6:01 a.m. — more than three hours after a low-pressure alarm had gone off indicating a possible problem — and didn’t report the leak to the Coast Guard until 9:07 a.m. Federal and state rules require immediate notification of spills.

Amplify said the line already had been shut down by 6 a.m., then restarted for five minutes for a “meter reading” and again shut down. A meter reading shows how much oil is flowing into and out of the line. The company could have been using that information to confirm if the pressure-change alarm was set off because the line was leaking, said Kuprewicz and Ramanan Krishnamoorti, a professor of petroleum engineering at the University of Houston.

The company said a boat discovered oil on the water at 8:09 a.m.