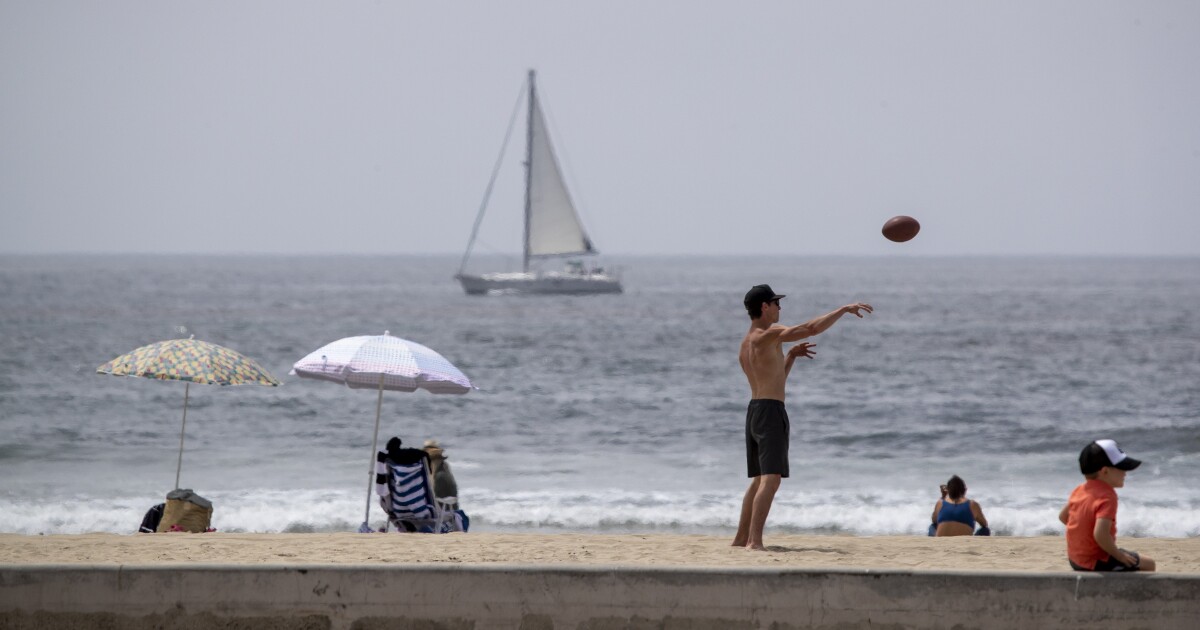 The oil slick is believed to have originated from a pipeline leak, pouring 126,000 gallons into the coastal waters and seeping into the Talbert Marsh as lifeguards deployed floating barriers known as booms to try to stop further incursion, said Jennifer Carey, Huntington Beach city spokesperson.

“We classify this as a major spill, and it is a high priority to us to mitigate any environmental concerns,” Carey said. “It’s all hands on deck.”

Oil has already washed up on the beachfront in Huntington Beach, and “we’ve started to find dead birds & fish washing up on the shore,” tweeted Orange County Supervisor Katrina Foley, whose district includes Huntington Beach.

Oil was still continuing to spill about five miles off the coast of Huntington Beach from a broken pipeline connected to an offshore oil platform known as Elly, Foley wrote. Foley said Newport Beach Mayor Brad Avery told her that “he hit the oil slick in his boat … heading back from Catalina. He saw dolphins swimming thru the oil.”

The areas just offshore from the Southern California coast are a major source of oil. The platform Elly, located in federal waters off the Los Angeles County coast, was installed in 1980 and processes crude oil production from two other platforms. Elly sits atop a large reservoir of crude oil that is called Beta Field, which sits atop waters managed by the U.S. Department of the Interior.

In a statement issued just before 1 a.m. Sunday, Huntington Beach officials said oil is still leaking into the ocean, and more work needs to be done after sunrise to repair the leak.

“While the leak has not been completely stopped, preliminary patching has been completed to repair the oil spill site. Additional repair efforts will be attempted in the morning,” the city said in a statement. “At this time, due to the toxicity created by the spill, the city is asking that all individuals remain clear of the beach and avoid coming into contact with oiled areas.”

Officials said they won’t know the extent of the damage until sunrise. But Huntington Beach said early Sunday the spill had caused “significant ecological impacts” to the beach and wetlands area.

The final day of the three-day Pacific Airshow, which had been scheduled for Sunday, has been canceled. The air show this year featured flyovers by the U.S. Navy Blue Angels, the U.S. Air Force Thunderbirds and the Canadian Forces Snowbirds.

Huntington Beach was closed from the Santa Ana River jetty to the pier.

The Coast Guard received an initial report of an oil sheen about three miles off the coast of Newport Beach about 9:10 a.m. Saturday. Workers moved to shut the pipeline down and use pressurized equipment to retrieve as much oil as possible soon after the incident was reported, said Kate Conrad of Beta Offshore, a Southern California oil producer involved in the operation.

“We were alerted quickly,” she said.

The Coast Guard has established a unified command along with Beta Offshore and California Department of Fish and Wildlife’s Office of Spill Prevention and Response. Supporting agencies are the cities of Long Beach, Newport Beach and Huntington Beach and the Orange County Sheriff’s Department.

People are being asked not to approach potentially affected wildlife, as “they can cause more harm than good to the animals,” but instead call the UC Davis Oiled Wildlife Care Network at (877) 823-6926, said Eric Laughlin, a spokesman for the California Department of Fish and Wildlife. A crew from the network has been mobilized for any needed rescue and rehabilitation work.

“Members of the public should avoid the oiled shoreline, as the area is unsafe and should be cleaned only by trained contractors,” Laughlin said.

“We are all quite concerned for the marine life,” Keating wrote in an email.

At a news conference late Saturday night, local officials expressed grave concern about the environmental impacts of the spill and hoped workers could prevent the oil from hitting sensitive wetlands.

“We’ve been working with our federal, state and county partners to mitigate the impact that could be a potential ecological disaster,” Huntington Beach Mayor Kim Carr told reporters.

The incident comes more than 30 years after a huge oil spill hit the Orange County coast.

On the afternoon of Feb. 7, 1990, the oil tanker American Trader ran over its anchor in relatively shallow water off Huntington Beach, spilling nearly 417,000 gallons of crude and fouling popular beaches along the Orange County coast. The oil killed fish and about 3,400 birds.

In 2015, an oil pipeline ruptured north of Santa Barbara and sent 143,000 gallons of crude oil flowing onto beaches and into the ocean. Tar balls from the leak were found as far away as Manhattan Beach.

The spill forced the closure of Refugio and El Capitan state beaches and covered waves, rocky shores, sandy beaches and kelp forests with oil. According to the Oiled Wildlife Care Network, which was involved in recovery efforts, 204 birds and 106 marine mammals died as a result of the spill.

A Santa Barbara County grand jury later indicted Plains All American Pipeline on 46 criminal counts, including four felony charges of knowingly discharging a pollutant into state waters. The company agreed to pay more than $60 million and change its operations to settle litigation arising from the oil spill.

There has been debate in recent years about whether the government should allow new oil drilling off the California coast. No new offshore oil drilling has been approved in federal waters off the state coastline since 1984.

The Trump administration proposed to open for exploration offshore oil and natural gas reserves, including waters off California.

Sen. Dianne Feinstein (D-Calif.) proposed a bill in January that would permanently ban the Department of the Interior from allowing new leases to allow for the exploration, development or production of oil or natural gas off the coast of California, Oregon and Washington state.

The worst oil spill in California’s history occurred in 1969, after a blowout of a drilling rig platform resulted in the spill of 4.2 million gallons of crude off Santa Barbara. Crude oil spewed out of the rupture at a rate of 1,000 gallons an hour for a month before it could be slowed.

The 1969 spill was the nation’s worst until the Exxon Valdez dumped 11 million gallons of crude oil off the coast of Alaska in 1989. That spill painted beaches black, and resulted in the corpses of seals and dolphins washing in with the tides.

The largest marine oil spill in U.S. history resulted in 134 million gallons of oil spilling into the Gulf of Mexico after an explosion in 2010 rocked the Deepwater Horizon drilling platform.