On All Souls Day, we come face to face with the least comprehensible part of life: death. 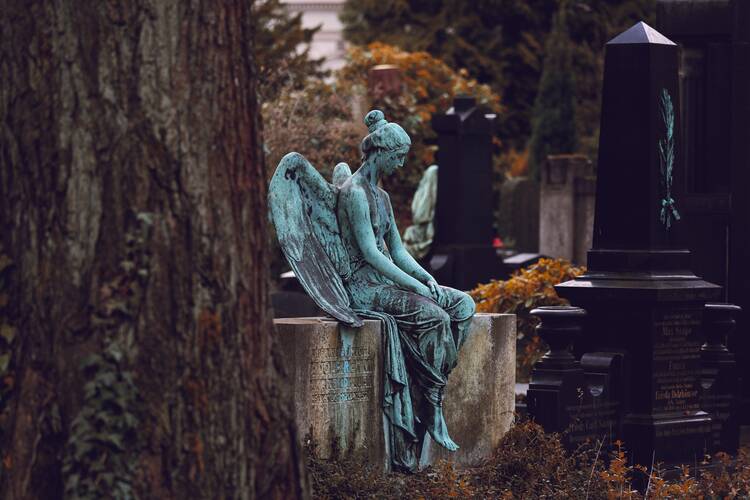 A Reflection for the Solemnity of All Souls

Death is the least comprehensible part of life, though it is all that we are assured by birth. Eventually, we experience the death of others—but not as they do. They walk through what might be likened to a door; we do not. We only know that they are gone, and that fact alone is nigh impossible to comprehend. How can someone whom we love be with us and then not be with us? How can they not be?

We experience the death of others—but not as they do. We only know that they are gone, and that fact alone is nigh impossible to comprehend.

This is the struggle faced by Michaela, a young widow in Joyce Carol Oates’s newest novel Breathe (2021). At 37, she is the second wife of Gerard McManus. Forty-eight, he is a distinguished Harvard professor in the history of science, whom she accompanies to New Mexico for an academic residency. They are to spend eight months exploring the Land of Enchantment. Instead:

Michaela cannot comprehend what has happened in such a small space of time. She strives to bring her dead husband’s research and writing to a conclusion, as though keeping up a man’s work would somehow keep him alive. Like so many others, Michaela dreams of her husband being alive, coming back to her. It has all been a mistake; it can be undone.

Several months after his death, Michaela mistakes a man in a wheelchair for her husband. In her twisted thoughts, the young widow even adjusts the illusion in front of her to allow for a lapse in time.

If Gerard had not ceased to exist on April 13 of this year but had continued existing, his appearance now will differ to a considerable degree from what it had been on April 13.

If Michaela’s husband had not died, then he must have continued to change in time. Because that is what we do in time, right? We change. Indeed, that is how we have been taught to measure time. We observe changes.

The church has always prayed for her dead, just as she has always prayed to her dead. This is the first truth we celebrate on All Souls Day: Because Christ came back through it, we remain in communion with those who have walked through the door of death.

This is the first truth we celebrate on All Souls Day: Because Christ came back through it, we remain in communion with those who have walked through the door of death.

The second truth has to do with time, but in its deepest root, which is change. Time does not pass in eternity. Not in heaven, hell or purgatory. The world of ceaseless change that came from God returns to God, yet God is not endless stasis. God cannot be less than the world, the whirlwind of change and development that comes from God. Thus, even in eternity there is change. Not a ceaseless passing but a coming to be in permanence.

The faithful shall abide with him in love:
because grace and mercy are with his holy ones,
and his care is with his elect (Wis 3:9).

Our lives in this world never cease changing. We never stop striving for something we cannot even define. After death, the source of what we seek brings us to completion, picks up our scattered pieces of self. In mercy, Christ gathers in what we have only been able to sow.

And this is the will of the one who sent me,
that I should not lose anything of what he gave me,
but that I should raise it on the last day (Jn 6:39).

Trying to apply time and space turns purgatory into a puzzle. It does the same to heaven and hell, whether we realize it or not. Three realities follow death: consummation, carnage and completion. Two of these, consummation and carnage, are ends in themselves. The third is the final, transfiguring mercy of God, a completion of human life for which we pray.